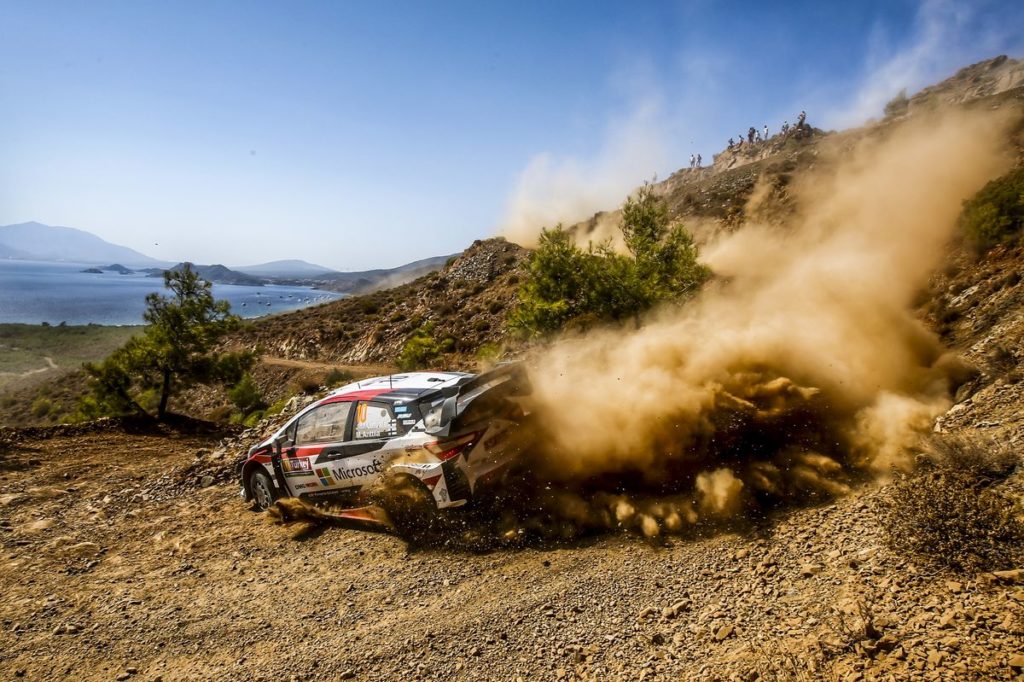 The Toyota Gazoo Racing World Rally Team will continue to fight for valuable points on the final day of Rally Turkey. Jari-Matti Latvala and Kris Meeke are sixth and seventh respectively overnight, while their team-mate Ott Tänak unfortunately had to retire this morning.

The day consisted of two loops of three stages to the west of Marmaris along the Datça Peninsula. The team’s three crews began the day in seventh, eighth and ninth, hopeful of making up places on a notoriously demanding event. They all gained one place on the morning’s opening stage, but Tänak was unable to start the second stage and had to retire from the leg. After bringing the car back to service, the team established the cause as a failure of the electronic control unit (ECU) and prepared the car to return under restart rules tomorrow.

Latvala and Meeke meanwhile swapped positions several times during the day as they tried to keep the pressure on the drivers ahead of them, aiming to secure as many points as possible for the manufacturers’ championship.

Quotes:
Tommi Mäkinen (Team Principal)
“It was obviously very disappointing that Ott had to stop this morning, and I’m sorry for him that it happened. We discovered that it was an issue with the ECU: of course, we will investigate it. I’m sure he will try his best in the Power Stage tomorrow, but it won’t be easy with his road position. It’s been difficult for Jari-Matti and Kris to gain any positions, but it looked like they had a lot of road cleaning today and they just couldn’t fight. There’s not a long way to go tomorrow, but we need to keep going and get as many points as we can.”

Ott Tänak (Driver car 8)
“On the road section after the first stage this morning, the car wouldn’t fire up ready for the next stage. We worked a lot and we tried to find the reason but it seems it was something internal – an ECU failure – so there was nothing we could do. Of course, it’s frustrating, especially in a moment like this when we are fighting for our first title. It definitely makes everything a lot harder, but that’s the way it is. It’s not going to come in an easy way, and we just need to accept that and fight on.”

Jari-Matti Latvala (Driver car 10)
“From the first stage this morning it was very slippery with a lot of loose gravel, running second on the road. It started to get better on the shorter stages, and the third one was really nice: a fast stage that suited me very well and the time was reasonably good. This afternoon, I tried to attack on the long stage to keep the pressure on, but I struggled after that because my tyres were so worn. Tomorrow our road position will be better and that will help us to see our real performance compared to the others. We’ll also try something with the car to help the tyre wear and to learn for the future.”

Kris Meeke (Driver car 5)
“It’s been a tough day. There was a lot of road cleaning and that was a factor, but we also have some work to do to improve our pace on this type of surface. We tried our best but those behind us on the road just kept coming through faster than us. Tomorrow, we just need to bring it home and score the points for the manufacturers’ championship. It’s close between myself and Jari-Matti, but whether I’m in front or he’s in front, it doesn’t matter.”

What’s next?
The final day of Rally Turkey consists of four stages in all. Separated by single runs of the Gökçe and Çiçekli stages to the north are two passes over the Marmaris test, the latter as the Power Stage.

Key stage: Marmaris (SS14 & SS17, 7.05 kilometres)
Martin Järveoja (Co-driver car 8): “This one starts like a super special down in the town with a short section on asphalt. Then there’s a tough climb uphill, while the last part is faster and smoother to the finish right by the service park.”

0 0 0 0 0
Previous : WRC – Hyundai Motorsport has maintained a provisional podium position despite another day of ups and downs in Rally Turkey
Next : WRC – Dominant C3 WRCs consolidate their lead !