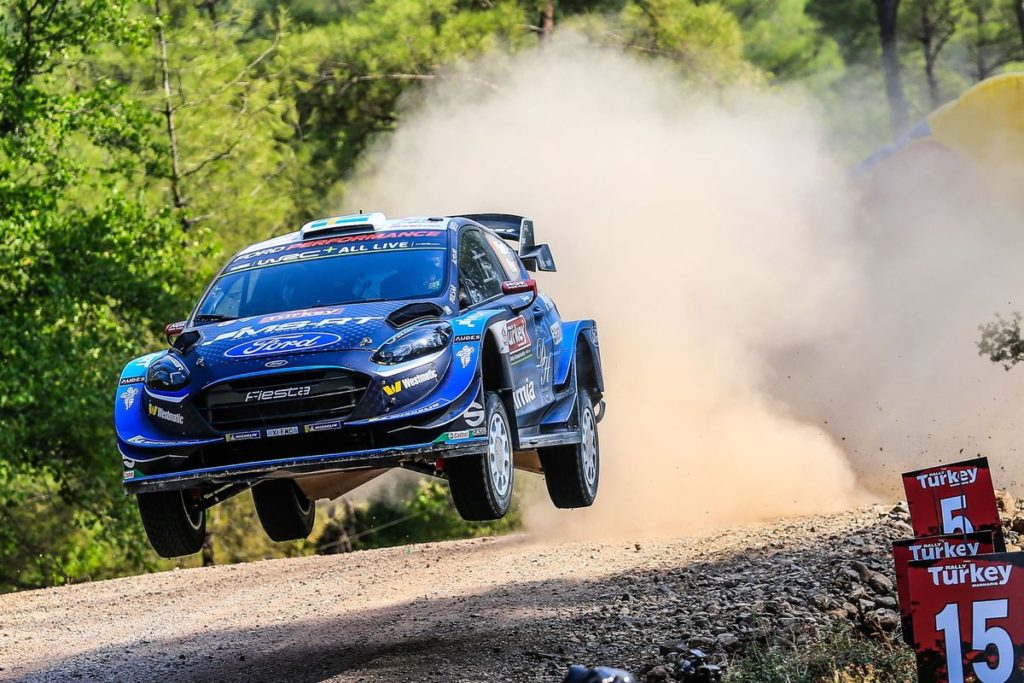 M-Sport Ford World Rally Team’s Teemu Suninen and Jarmo Lehtinen are in the fight for the podium positions at this weekend’s Rally Turkey – their EcoBoost-powered Ford Fiesta WRC less than 10 seconds adrift of the top-three with one day of rallying left to contest.

After an impressively consistent performance through yesterday’s rock-strewn stages, Suninen was well placed to fight for the top positions – and although he didn’t find the optimum rhythm through this morning’s smoother speed tests, he was back on the pace this afternoon.

Regrouping brilliantly, the young Finn was on form and dialled into the right balance between attacking the stages and preserving his tyres. Posting a series of top times, he had the better of his nearest rival and significantly reduced the gap to the podium – even despite losing the front splitter on the penultimate stage!

In the sister Ford Fiesta WRC, team mate Pontus Tidemand was tasked with opening the road – learning how to contend with the loose conditions and sweeping a clean line for those behind.

Enjoying his driving and working to improve his technique behind the wheel, the young Swede is increasing his knowledge and gaining a wealth of experience which will be vital to his future development at the sport’s highest level.

Team Principal, Richard Millener, said: “It’s been another good day for Teemu and it’s great to see him still right there in the fight for the podium. He struggled with the transition from being cautious to being flat-out this morning, but he was quick to regroup and we saw some more strong times from him this afternoon. He was also one of the best when it came to saving his tyres, and that just shows how much he’s learning this year. Pontus is right at the beginning of that learning curve and it’s so important that he gets the experience under his belt. He had to contend with some really loose conditions today, but it’s good experience and he just needs to keep focusing on himself and building that knowledge for the future.”

Teemu Suninen (4th) said: “I struggled to get into the rhythm this morning, but this afternoon was really good and we found good pace on all of the stages. My tyres were in pretty good condition and I was pleased with that because it’s something I’ve been working to improve. Unfortunately we had some small damage on the car which meant we couldn’t take full advantage on the last stages – mainly because the driver kept knocking bits of aero off! I came here to do my best, and even though fourth place would be nice I think we have to go out there and see what we can do tomorrow – just go flat out and see if we can make it onto the podium.”

Pontus Tidemand (9th) said: “I’ve really enjoyed the day and being first on the road meant that I could choose the line, but of course that also means that the times weren’t going to be great. I had to clean a line for the cars behind, and even on the second pass I needed to push through the ruts to open the line. But it’s good learning and in the last two stages I felt quite a good rhythm in the car – so let’s see if we can build on that tomorrow.”

0 0 0 0 0
Previous : Rast unstoppable: Audi driver on course for title after perfect Saturday
Next : WRC – Hyundai Motorsport has maintained a provisional podium position despite another day of ups and downs in Rally Turkey