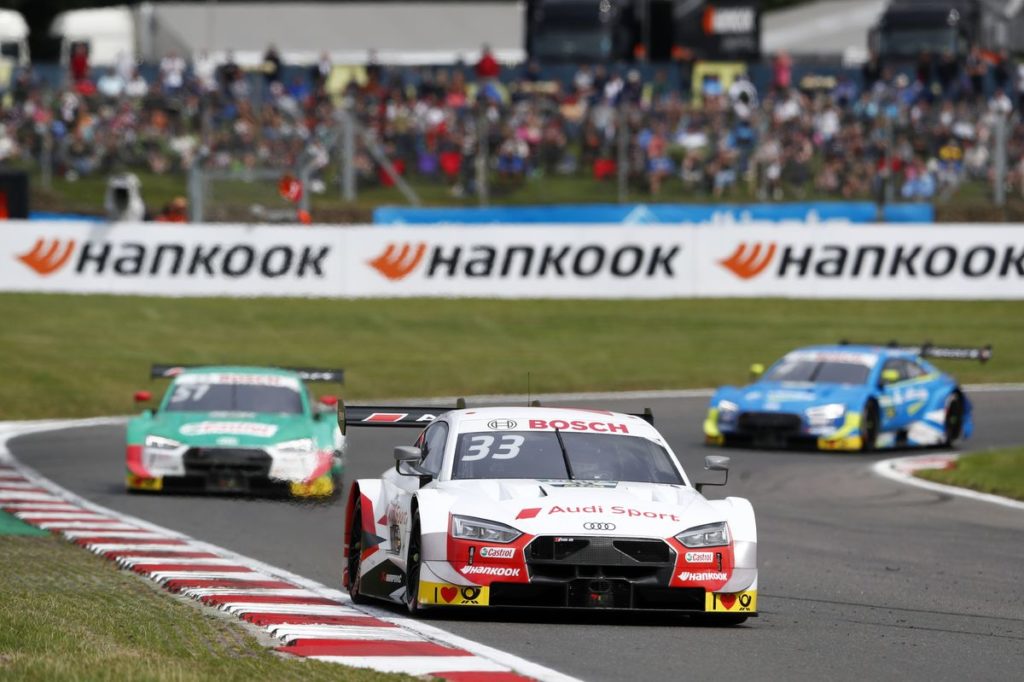 This weekend’s DTM weekend at the Nürburgring (13-15 September) marks the critical penultimate stage in a tense season-long fight for the 2019 drivers’ championship.

The handful of drivers chasing the leading Audi pair of René Rast (234 points) and Nico Müller (214) face an extreme challenge to keep their title hopes alive and take the fight to the final weekend, at the Hockenheimring next month (4-6 October).

Their aim is simple: leave the weekend having out-scored Rast. But, for Müller, too, there is still a pressing requirement to keep the gap to the leader as narrow as possible in order to maximise the chance to grab his first DTM title at the finale.

If the drivers’ title remains wide open, there’s still everything to play for in the teams’ standings: after 14 of 18 races, Nico Müller’s Audi Sport Team Abt Sportsline leads with 335 points from the Audi Sport Team Rosberg (313), which includes Rast in its line-up.

A towering support programme in the Eifel

Early on Saturday evening, German producer Moguai will provide the soundtrack to the paddock as the sun slips behind the Eifel mountain. The DJ from the city of Marl is one of the German techno scene’s pioneers, one of the world’s most popular DJs, and acclaimed produced of bands such as Sugababes and Girls Aloud.

Access to the concert, which takes place in the DTM paddock’s Fan Village at 17:30, is free to everyone with a valid grandstand ticket for the Saturday. From 21.00 hrs onwards, the brass pop band Querbeat will be on stage in the ring arena – with DTM fans able to receive a special discount for the concert via DTM.com.

Tickets for the race weekend at the Nürburgring are available through the official DTM.com/tickets website.

The DTM is broadcast live in 31 countries, and can be watched across the world via the official live-streams at DTM.com, on YouTube and the mobile DTM app.

“You can’t expect things to go the same as last year, where I scored maximum points – although it’s nice to think about! Last year’s Nürburgring race was a really exceptional weekend; something that had never happened in the DTM before. From the very start, everything just fell into place. In qualifying, we’re very strong, but I don’t think we’re doing anything different from the other drivers. Perhaps my preparation is a little bit more intensive, but apart from that, we all have the same ability. There’s no secret there.” – René Rast, Audi Sport Team Rosberg

“My goal is quite clear: reduce the gap to René. To do that, I have to fight for race wins. I expect René to be among the frontrunners at the Nürburgring – so if I want to make up points and beat him, I’ll have to be up the front too. On the other hand, I also want to extend my margin over Marco [Wittmann] and Philipp [Eng]. If we manage to do that prior to Hockenheim, we’ll gladly take it – but those guys could well strike back at the Nürburgring. Marco and Philipp will once again be among the candidates for victory.” – Nico Müller, Audi Sport Team Abt Sportsline

“In the past few weeks, we’ve seen that Audi has been a bit collectively stronger than us. It’s not been just René [Rast] and Nico [Müller], there have been many Audis up front, both in qualifying and in the race. For us, it’s a difficult situation, but at the end of the day, the only thing I can do is to do my best and see what we can make of every opportunity. We’re not burying our heads in the sand, but we keep trying to give it our all, even when we know that we can no longer achieve it by our own means. But anyone who knows the DTM also knows that anything can happen at any time. Everything’s still possible. I hope that the Nürburgring is a track that suits us a little better. We’ve been quite good there in the past and have won races.” – Marco Wittmann, BMW Team RMG

“At the Lausitzring, we saw that we had caught up with our opponents in terms of top speed. Our performance on the straights was stronger. We know what the problems were when our cars didn’t make it to the finish and we’re hoping to get our overall package sorted in a better way for the Nürburgring – both in terms of set-up and engine performance – and also improving the recent reliability issues we had at the Lausitzring.” – Ferdinand von Habsburg, R-Motorsport/Aston Martin

René Rast wrote a page of DTM history at the Nürburgring in 2018. The Audi driver claimed pole position, followed by the race win on both Saturday and Sunday, becoming the first DTM driver to score the maximum of 56 points in a single weekend. Should Rast pull off this feat in the Eifel again this weekend, he would be beyond reach for the season finale at the Hockenheimring (4-6 October 2019), thereby securing his second DTM drivers’ title following his 2017 victory.