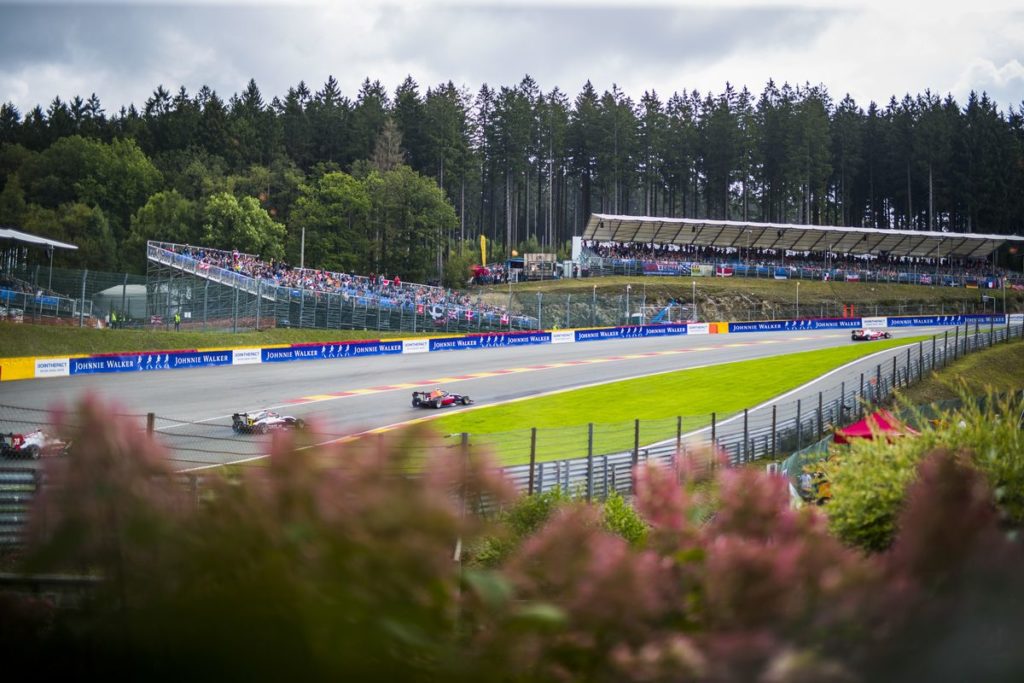 Marcus Armstrong won a tribute led FIA Formula 3 Race 2, at Spa-Francorchamps. The PREMA Racing driver emotionally dedicated the win to the late Anthoine Hubert, following the tragic events in yesterday’s Formula 2 race. Armstrong led from lights-to-flag to finish ahead of Jenzer Motorsport’s Yuki Tsunoda, who scored his highest ever finish in the Championship. Robert Shwartzman came home third, after a late overtake on ART Grand Prix’s Christian Lundgaard.
The action started following a minute of silence in remembrance of Hubert, with teams, drivers, staff and officials from across Formula 1, Formula 2, and Formula 3 all coming together on the grid ahead of the start.
Reverse grid polesitter Armstrong got away cleanly off the line and retained his place ahead of Leonardo Pulcini. However, the Hitech Grand Prix racer was forced wide at the first turn and Tsunoda was able to pounce and leap ahead of him for P2. The Italian dropped down to 7th, with Lundgaard, Shwartzman and Jehan Daruvala all benefitting.
Liam Lawson spun off track in the early exchanges, but was able to recover and get back underway, albeit from the back of the grid. Niko Kari wasn’t so lucky and was forced into retirement after going off track.
Armstrong still held the lead over Tsunoda and set the fastest lap in his attempts to put air between them. Jüri Vips had lost places in the opening two laps, dropping from 4th down to 10th, before managing to squeeze back ahead of David Beckmann for 9th.
Simo Laaksonen plunged into the barriers after spinning off track, which brought out a safety car. The MP Motorsport man’s car was removed from the barriers and he was taken to the medical centre for the usual checks.
When the Safety Car returned to the pits, Armstrong held his position ahead of Tsunoda and Lundgaard, who remained 2nd and 3rd. The back of Jake Hughes’ HWA RACELAB was then nicked by Devlin DeFrancesco, and the pair briefly skidded off the circuit. They were initially able to return to the track, before being forced to retire from the pits.
Armstrong was able to build a 2.5s gap between himself and Tsunoda, with Lundgaard harrying the back of his Jenzer machine. The Renault F1 junior was also under attack, with Shwartzman just 0.7s behind and Daruvala 0.5s.
Max Fewtrell was the morning’s next retirement, being forced out of his car following a puncture at the end of the Kemmel straight. Meanwhile, Lirim Zendeli and Raoul Hyman collided when attempting to avoid Logan Sargeant, who had locked up around the corner. Zendeli was able to finish the race, but Hyman was forced to retire.
Armstrong held a comfortable lead going into the final lap, as did Tsunoda, who had built up a gap of over 1s. Lundgaard was attempting to hold off Shwartzman, but eventually succumbed to the PREMA man, who sent it down the side of him, in the final sector.
Armstrong crossed the line in 1st, ahead of Tsunoda and Shwartzman. Lundgaard was 4th and Daruvala 5th.  Piquet, Pulcini, Teppei Natori, Felipe Drugovich and Ye Yifei completed the top ten.
Robert Shwartzman stretches his lead in the Drivers’ Championship to 152, ahead of teammate Jehan Daruvala on 129 and Vips on 122. Armstrong is 4th on 119 and Lundgaard 5th with 93. In the Teams’ Championship, PREMA Racing are still 1st, with 400 points, ahead of Hitech Grand Prix on 183 and ART Grand Prix on 170. Trident are 4th with 89 and HWA RACELAB on 66.
The Championship will resume next weekend in Monza, when Shwartzman and PREMA will hope to further cement their impressive title charge.
FIA Formula 3 Round 6 – Race 2 provisional classification