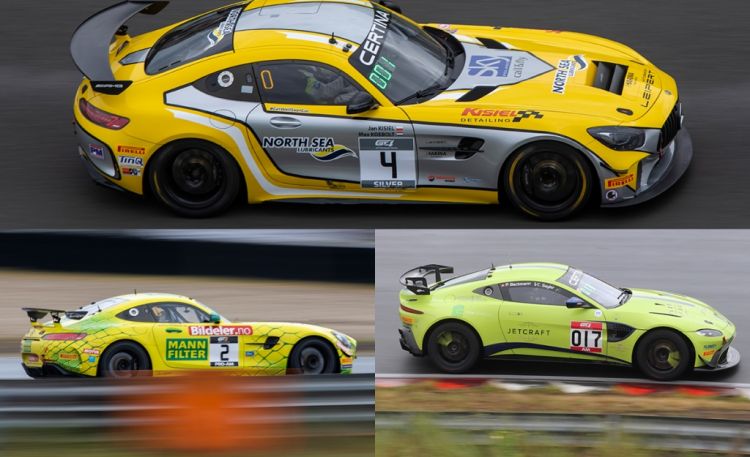 The Nürburgring will host the final round of the 2019 GT4 European Series this weekend and just like last year, the titles will be decided at the 5.1 km circuit in the German Eifel region. All three drivers’ titles as well as the teams’ championship are still to be decided in the final two races of the season.

After ten of the 12 races this season, the fight for the Silver Cup title is between the Leipert Motorsport-pairing of Max Koebolt and Jan Kisiel, MDM Motorsport drivers Simon Knap and Alec Udell and Equipe Verschuur’s Benjamin Lessennes and Daniel McKay.

Thanks to top six finishes in all races so far, including wins at Brands Hatch and Misano, Koebolt and Kisiel have a six-point lead over Udell and Knap, who scored three wins this season. The American-Dutch pairing won last time out at Zandvoort, keeping the pressure on Koebolt and Kisiel until the final weekend. Monza race winners Lessennes and McKay are 22 points behind the Dutch-Polish points leaders and will face a very difficult task at the Nürburgring.

In theory, Ekris Motorsport drivers Ricardo van der Ende and Euan McKay, as well as Phoenix Racing’s Nicolaj Møller-Madsen and Cedric Freiburghaus, could also still win the championship, but they would need to score maximum points and see the current top three teams score virtually no points in the two races at the German track.

In Pro-Am, Marcus Paverud and Luci Trefz defend a 25-point lead over Marius Zug and Gabriele Piana. The Norwegian-German pairing has a 100% finishing score so far this season and the Leipert Motorsport drivers could wrap up the title as early as Saturday’s race. The RN Vision STS drivers can only do their utmost to stay in contention until the final race of the season on Sunday.

Street Art Racing’s Clement Seyler and Pascal Bachmann hold a 19-point lead in the Am category. CMR’s Eric Mouez and David Loger will be their only remaining competitors in Germany, as third-placed Liesette Braams will not compete at the Nürburgring this weekend.

In the teams’ standings Leipert Motorsport is also in first position ahead of the final round of the season. The German team has amassed a total of 197 points over the course of the season, 35 more than Equipe Verschuur has scored so far. Street Art Racing and MDM Motorsport are the other two teams that could still win the team’s title, although their chances are very slim.

The races at the Nürburgring, however, never go as planned. Koebolt and Knap were both in contention for the 2018 title, when a first lap accident in the final race effectively ended their chances of winning the drivers’ title. A fire onboard the title contending HHC Motorsport Ginetta and a fifth place for the Phoenix Racing Audi resulted in three teams finishing on equal points, with the Audi drivers taking the title on the number of wins in 2018.

A total of 32 cars is set to compete in the final round of the 2019 season, including two BMW M4 GT4’s run by Lestrup Racing Team, which normally races in GT4 Scandinavia. Centri Porsche Ticino will make its second appearance this season, while Belgian team JAC Motors returns with an Audi R8 LMS GT4, after making its series debut at the Nürburgring in 2018. 15 cars are entered in the Silver Cup, 10 cars will compete in Pro-Am and seven will race in Am.

Max Koebolt, #4 Leipert Motorsport Mercedes-AMG: “It won’t be an easy job. BMW and McLaren are both fast and the Nürburgring requires a lot of top speed and that will be difficult for us when we’re fighting. But I think we can make up a lot of time in the corners in the second sector. Either way, we’ll have to go for it and stay out of trouble this time.”

Marcus Paverud, #2 Leipert Motorsport Mercedes-AMG: “It will be a nerve-racking weekend for us for sure. My tactics will be to get the points we need, without pushing too hard and messing up.”

Luci Trefz, #2 Leipert Motorsport Mercedes-AMG: “For us it is important not to make any mistakes. It’s all about consistency and scoring points. We lead by 25 points, which is a good gap. But the important thing is that we do well and don’t crash.”

0 0 0 0 0
Previous : Final sprint for Blancpain GT World Challenge Europe titles gets underway at the Nürburgring
Next : WRC – Evans set to return in Wales