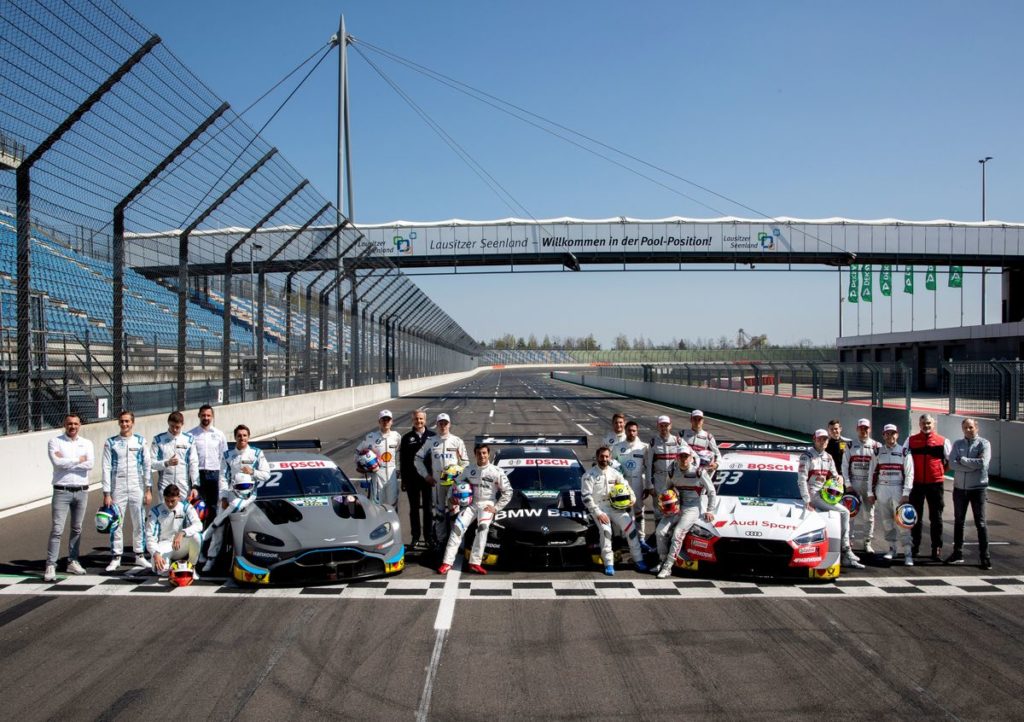 A jubilee in the DTM and the first chance for the Four Rings to score a proverbial match point: in the 500th DTM race at the Lausitzring on Sunday (August 25), Audi may be able to secure an early manufacturers’ championship win.

Audi has scored 710 points in the first twelve races and its closest rival, BMW, 426. If its advantage grows by another 20 points this weekend, the brand will be sitting in the top spot out of its rivals’ reach before the two remaining race weekends at the Nürburgring (September 14/15) and at Hockenheim (October 5/6).

“Traditionally, the drivers’ title has the highest value in the DTM,” says Head of Audi Motorsport Dieter Gass. “But the manufacturers’ title is very valuable, too. It’s a strong indicator for the work of the entire squad and also for who has the best car. We’ve been very happy so far with the performance of our Audi RS 5 DTM and the new two-liter four-cylinder turbo engine.”

Audi has previously celebrated seven DTM victories at the Lausitzring, but also had to accept a round with zero points in Saturday’s race last year. The TV footage of René Rast’s spectacular rollover is unforgotten. “The accident looked worse from the outside than it was,” says the DTM leader. “But the fact that I wasn’t able to compete in the second race on Sunday may have cost me the title. After all, I was lacking only four points.”

Currently, Rast, with 206 points, is heading the drivers’ standings. His fellow Audi driver, Nico Müller, who is the only driver to have scored points in all twelve races this year, trails him by 37 points. Marco Wittmann, as the best BMW driver, has a deficit of 59 points.

The Lausitzring, says Rast, is not exactly his favorite circuit. “The track is very technical and does not pose a particularly great driving challenge. Even so, the Lausitzring is a nice facility and the track actually offers everything you need as a race driver: slow turns, fast turns and a long straight on which we have good overtaking opportunities with DRS and Push-to-Pass. That’s why the races at the Lausitzring are usually very good. And from the main grandstand, the spectators have a view of nearly the whole track.”

The Audi DTM drivers share their most defining DTM experiences

The 500th DTM race on Sunday also marks a milestone for the leader of the standings. “As a child I was at the airfield race in Diepholz,” the Audi driver recalls. “That was in the early 1990s, the era with Klaus Ludwig and Kurt Thiim, and a defining moment for me. Later, I contested races as part of the DTM’s supporting program for many years and always dreamed of becoming a DTM driver myself. When the dream literally came true overnight, I’d already given up my hopes.” His personal DTM highlights: “My first victory at Budapest in 2017 and, obviously, my title win.”

The first DTM race that his closest rival, Nico Müller, personally witnessed at the venue was the finale of the 2005 season at the Hockenheimring. “On TV, I’d been watching the DTM before. My personal highlight was definitely Norisring 2016 – my first victory, which I’d fought for hard. Standing on top of the podium there, at Audi’s home round in front of the many fans, was truly unforgettable. It was the reward for a lot of hard work and felt mega-cool.”

Mike Rockenfeller, currently in fifth position of the standings, saw his first DTM race as a child at the Nürburgring. “That was in the middle of the 1990s,” says ‘Rocky.’ “Alfa Romeo was racing against Mercedes. It was raining and all the cars had their lights on. I’d only known anything like that from my Carrera track and was totally fascinated. Still, even in my boldest dreams, I wasn’t able to imagine racing in the DTM myself later. My first DTM test in 2007 was a very special moment. I’d almost exclusively been driving GT cars before and switching from Porsche to Audi was a big step for me. At that time, I didn’t expect that it would take so long to win races in the DTM and to become champion. That’s why my title win in 2013 at Zandvoort was all the sweeter – especially after I almost made a jump start.”

Robin Frijns, who in his second DTM season is currently in sixth position of the drivers’ championship, had been dreaming of the DTM for a long time, too, before becoming a DTM driver in early 2018. “The series has such a long tradition and stands for gripping racing – exactly what I like. When I heard that I was going to become part of the Audi squad I was both overjoyed and speechless.” His personal highlight so far has been the final race at Hockenheim in 2018. “I started from the last spot on the grid and in the end came fifth. I pitted late and afterwards was able to fully attack again and overtake many cars. That was great fun.”

Loïc Duval, who in seventh position overall is currently contesting his best DTM season so far, was active in Formula 3 as part of the DTM’s supporting program in 2004 and 2005. “I remember Zandvoort 2005 especially well,” says the Frenchman. “Before going home, I watched the DTM race on Sunday when Peter Dumbreck in an Opel had his massive accident at the end of the last turn. I’ll never forget that. The crash was incredible, but he was personally okay. That was the most important thing. I’ve always been impressed by the close racing with these types of cars and I’m happy to be part of the DTM myself today.”

Jamie Green, currently in ninth position of the standings even though he had to skip the two races at Misano due to appendix surgery, has particularly made a name for himself in the DTM with his four victories at the Norisring. The city street circuit in Nuremberg is also the place of his so far sweetest DTM recollection. “That was clearly my Norisring victory in 2012,” says the Briton. “Shortly before the end of the race, I overtook two BMW — including a crucial maneuver in the last turn.” Green has won three times at the Lausitzring as well. The first DTM race he saw was at Donington, in 2003. “That’s my home track. It would be cool if the DTM raced there once again before the end of my career.”

The DTM highlights of the Audi Team Directors

Thomas Biermaier, Team Director of Audi Sport Team Abt Sportsline, mentions a Norisring race as his most defining DTM moment, too: “That was in 2002, when Laurent Aiello overtook Bernd Schneider in the last turn. Before this race, I’d slipped into the role of team manager and the pressure was very high. But with good pit stops and victory, the risk paid off for me and, as a result, in a way marked the beginning of my career path with ABT. Besides many other moments, our first championship title in 2002, at Zandvoort, was unforgettable as well.”

Ernst Moser from Audi Sport Team Phoenix describes Valencia 2011 as his personal DTM highlight: “Martin Tomczyk in a previous-generation car and the newly entered sponsor Schaeffler clinched the title early in the penultimate race with a dream season. Also, the cars lined up on the grids at Hockenheim and at the Norisring in front of a full house are always particularly impressive moments for me – that used to and continues to produce goose bumps galore and makes me proud to be part of the DTM.”

Arno Zensen, Team Director of Audi Sport Team Rosberg, looks back even further: “I’ll never forget my first race as DTM Team Director in 1995, at Hockenheim. In Klaus Ludwig and Keke Rosberg we had a dream team and I was worried that we might soon be ridiculed as a show squad. But right in the first race, in third position, we clinched a podium. Incredible of course was the fact that in 2017, with a 21-point deficit, we traveled to the finale at Hockenheim and, with our rookie, René Rast, we also won the drivers’ title in addition to the teams’ title. That experience, after having to compete with previous-generation cars in the DTM for many years, was awesome.”

The personal top 10 of the Head of Audi Motorsport

Head of Audi Motorsport Dieter Gass in his younger years had ambitions of becoming a DTM driver himself. “During the years of my participation in the Renault 5 Cup and the Clio Cup, the races in the DTM’s supporting program were always the highlight,” he says. However, Gass ultimately decided to pursue a career as an engineer. Having kept track of the DTM practically from day one, he has compiled a personal top 10 list of events that came to mind on the occasion of the 500th DTM race: “Winning all three titles in 2017 at Hockenheim with René Rast as a rookie champion was a very special moment, but so were the first DTM title for Audi in 1990 with Hans-Joachim Stuck or the 2013 title win with Mike Rockenfeller in my first year as Head of DTM at Audi Sport, plus the top eight spots on the grid in Hungary, in 2017, as well as, most recently, the repetition of this feat at Brands Hatch that had been unique up until that time.”

“Obviously, some critical things come to mind, too, such as ‘Push him out,’ René Rast’s accident last year at the Lausitzring, the crankshaft affair in 1992 that drove Audi out of the DTM for many years, the water bottle at the Norisring, Barcelona 2007 when all Audi cars remaining in the race turned into the pit lane and, last but not least, Spielberg 2016 and 2017: there, in two consecutive years and in the same turn, a transmission problem ruined Jamie Green’s race while he was leading and potentially the championship, too. “

Audi has contested 304 of the 498 DTM races – including the starts with privateer drivers before 1990, even 311. 108 victories, 330 podiums, 99 pole positions, 107 fastest laps, ten drivers’ titles, six teams’ titles and four manufacturers’ titles are credited to the brand with the four rings.

Before the 500th DTM race on Sunday, championship points will also be awarded at the Lausitzring on Saturday. Both races, as usual, will start at 1.30 PM, German TV channel SAT.1 will start airing live coverage from the Lausitzring on Saturday and Sunday starting at 1 PM (CEST). The race track is located some 120 kilometers south of Berlin. Tickets for the event are available online at www.audi.com/dtm.

0 0 0 0 0
Previous : BMW DTM teams travel to the Lausitzring for a milestone weekend in the DTM
Next : A milestone and the final sprint for the title – the DTM is heading towards the Lausitzring