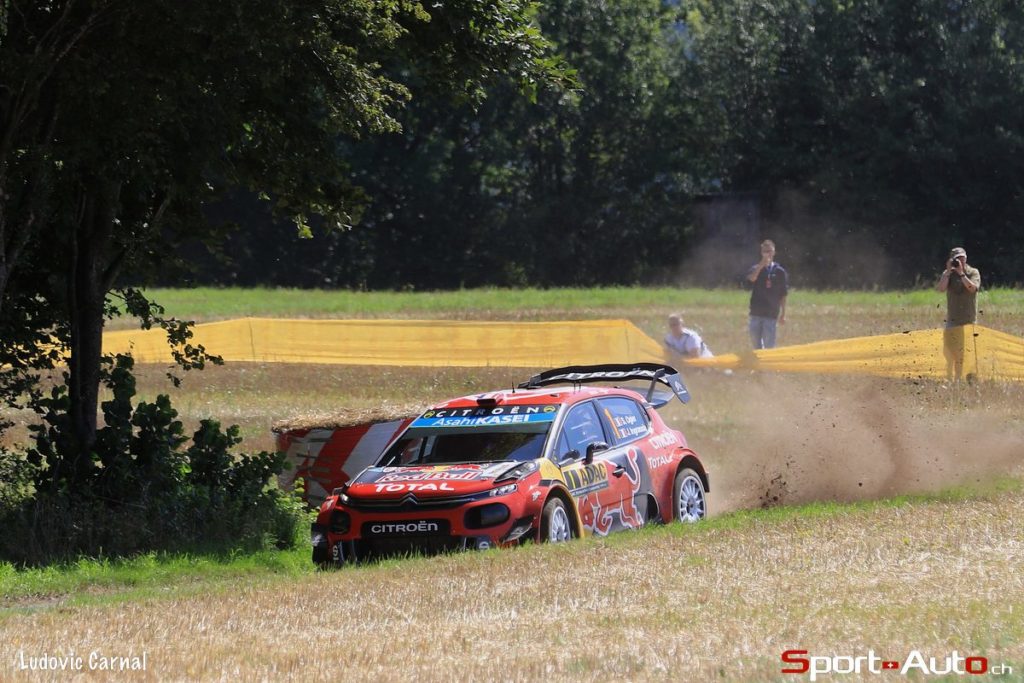 Sébastien Ogier – Julien Ingrassia and Esapekka Lappi – Janne Ferm ended Rallye Deutschland a disappointing seventh and eighth overall, as both crews struggled throughout the event to deliver their full potential in the C3 WRC, the French pair also collecting two harsh punctures. A tough weekend that the Citroën Total World Rally Team nevertheless leaves in determined mood, aiming to bounce back at the next round in Turkey (12-15 September).

With their chances of a podium place dealt a serious blow by the two punctures picked up by Ogier – Ingrassia yesterday on Panzerplatte, the Citroën Total World Rally Team concentrated today on improving the handling of the C3 WRC. The work done highlighted a few ideas on how to change the set-up, whilst also underlining the need to go further still. Today’s final leg concluded with Sébastien Ogier and Julien Ingrassia in seventh place, whilst Esapekka Lappi and Janne Ferm were just behind in eight overall, after briefly fighting back up to sixth position. This result means the French crew, who also scored a bonus point in claiming fifth place on the Power Stage, now lie third in the provisional world championship standings.

Although they very quickly noted that the set-up wasn’t quite right and the C3 WRC was understeering, meaning they had to push really hard to compensate, Sébastien Ogier and Julien Ingrassia ended the opening leg in third place. This despite making a few minor mistakes, unsurprisingly so given they were having to drive on – or over – the limit to keep in touch with the leaders. With day two including stages in the Baumholder military base, where they have delivered some formidable performances in the past, they had high hopes of being able to consolidate their position. Unfortunately, they fell foul of the very unpredictable nature of the Panzerplatte stage. They lost a little time with a slow puncture on the first run but worse was to come on the repeat, with a second puncture costing them more than 1m 30s. Their poor luck dropped them out of contention for the leading positions, leaving them to use the final leg as a test.

Less experienced on this demanding event, Esapekka Lappi and Janne Ferm were nevertheless just 7.3s off fourth place halfway through the first leg. However, they too made a mistake, a spin on SS5, as they struggled to push despite the set-up of the car not being entirely to their liking. They ended day one in seventh position. Whilst setting two second fastest times (SS9 and SS11) on Saturday, reflecting the progress made on the set-up of the C3 WRC, they were unable to avoid another minor error, but they dug in to make their contribution to the efforts undertaken by the team.

“Obviously, it was not the weekend we were hoping for, but I gave it everything. I was flat out a lot of the time, but it wasn’t enough. The times just weren’t there and the punctures certainly didn’t help. We had hoped to buck the trend here, but unfortunately, our situation in the championship hasn’t improved. I’m still going to keep fighting, like I have always done.”

“It was a very difficult weekend for us. We had difficulty finding confidence in the car and the speed to fight with the leading crews. We managed to make some small steps during the weekend but it wasn’t enough. We need more. I have faith in our ability to find the right solutions together for the future.”

What is your analysis of your disappointing performance this weekend?

We thought we had understood the reasons for our below-par performance in Corsica and had made the necessary changes for this tarmac round. We had hoped to be among the frontrunners this weekend, but the truth is that wasn’t really the case. We were closer to the leaders this weekend than in Corsica, but still too far away to be satisfied. We clearly missed something in our preparations. The only full day of testing conducted by Sébastien and Julien was disrupted by rain, something we didn’t have during the rally in the end. So that prevented us from completing our test programme on dry tarmac. We were also unlucky with the two punctures picked up by Sébastien and Julien in the Baumholder military base, when they were definitely still in contention for a podium place. In any event, our crews tried really hard all week, always looking to get the absolute maximum from the car, regardless of the circumstances. That is also why, as they tried to compensate for the handling issues, they ended up making a few minor mistakes. The technical team never let up either, despite the obvious disappointment, and it is this fighting spirit – combined with the lessons learned here – that will enable us to come away stronger from this test.

How do you see the rest of the championship developing?

We are obviously in a more difficult situation in the championship now. But we’re not the kind of people to give up whilst there is still hope. There are four rallies still to go, including some of the  most difficult events in the championship, so a lot can still happen. We have a pre-event test for Turkey coming up next week and we’ll be fighting right to the end of the season with togetherness, commitment and passion.

0 0 0 0 0
Previous : WRC – Thierry Neuville secured three stage wins on the final morning – including the Power Stage – underscoring the progress on tarmac
Next : Toyota Yaris WRC sweeps the podium in Germany