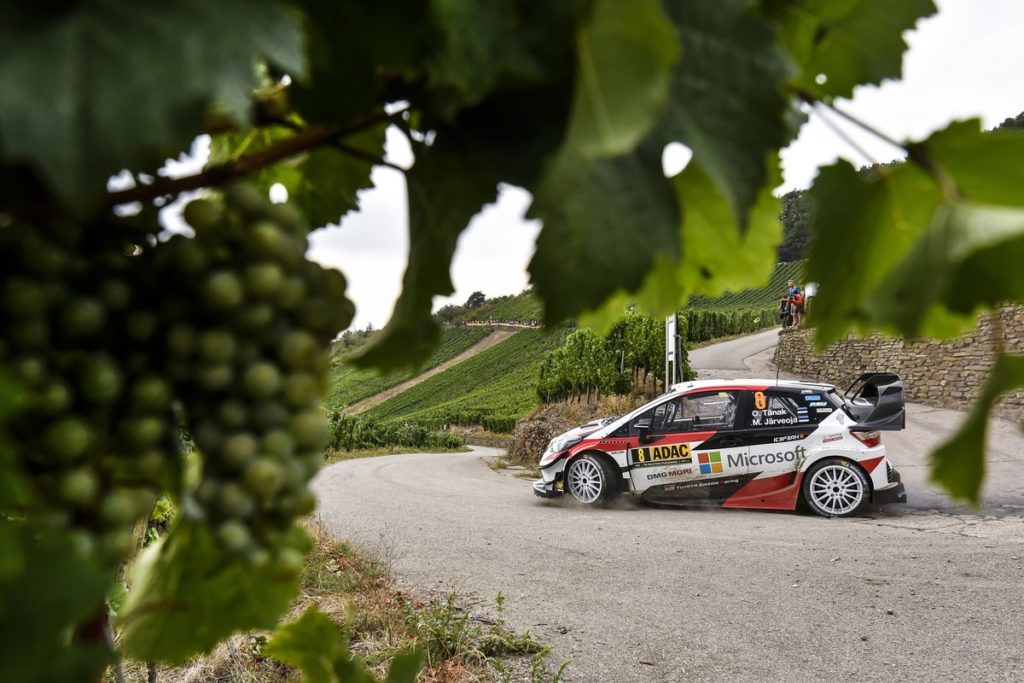 The Toyota Yaris WRC returns to asphalt for round 10 of the 2019 season in Germany, where drivers Ott Tänak, Jari-Matti Latvala and Kris Meeke will take on the demanding and diverse roads of Rallye Deutschland (August 22-25). Fresh from victory on Rally Finland, Tänak is targeting his third Germany win in as many years as he seeks to further increase his 22-point lead in the drivers’ championship.

This year the rally begins from the service park, with Thursday evening’s opening stage to take place on nearby roads that drivers will have practiced on during shakedown earlier in the day. Friday’s leg is unchanged from last year, with two loops consisting of a pair of vineyard tests and the Wadern-Weiskirchen road circuit on the way back to service. Saturday has a new format, beginning with two country-lane stages each run twice in the morning, followed by two loops around Baumholder – including the 41.17-kilometre Panzerplatte – separated by an additional 15-minute service. Two repeated stages back in the vineyards round out the rally on Sunday.

Quotes:
Tommi Mäkinen (Team Principal)
“Our fantastic result in Finland was really important for both championships, and we all hope that we can continue that form in Germany. We were strong there last year, and Ott has won the rally for the last two seasons, so we are feeling confident about our chances as a team of another top result. It’s a rally where there’s a lot that can catch a driver out, whether it’s in the vineyards or the Baumholder roads, so you need to have confidence in your car and be very focused to avoid mistakes.”

Ott Tänak (Driver car 8)
“Germany is obviously a rally that I like a lot. Martin and I have won there two years in a row and our target this year is definitely to make it three. It’s certainly not an easy rally: I think last year was one of the most difficult wins in my career, as the competition was very strong and I had to push really hard from the beginning. It’s a big challenge for a driver to have so many different types of road in one rally, and to try to be fast on all of them and not make any mistakes. We know that the weather is often a big factor as well, and it can be very hard to predict.”

Jari-Matti Latvala (Driver car 10)
“It was really good to get the podium finish in Finland, and it means that I have a more relaxed feeling going to Germany. Last year we were up to second place when we had a problem on the final day and had to retire, so we know that we can be strong there. I’m really excited to see how we will do and I hope we can be fighting for the podium places again. The last asphalt rally in Corsica was difficult for me but we really worked on this in our test in Germany before Rally Finland: We were working on the braking and the turning, and I had a good feeling in the car.”

Kris Meeke (Driver car 5)
“After a run of gravel events, I’m really looking forward to competing on asphalt again. I’ve had a great feeling with the Yaris WRC so far on asphalt and I hope that we can find that again in Germany. It’s always a really demanding event because of the three different types of terrain and, on top of that, the weather is often changing from one stage to the next. But it’s a rally where I’ve been competitive in the past and I really hope that we can secure a good result for the team.”

What happened last year?
Ott Tänak and the TOYOTA GAZOO Racing World Rally Team followed their Rally Finland triumph by securing victory on Rallye Deutschland: The maiden win on asphalt for the Toyota Yaris WRC. As in Finland, the team achieved a double podium result, with Esapekka Lappi finishing in third place. Jari-Matti Latvala began the final day in third overall but had to retire because of a hydraulic pump issue.

0 0 0 0 0
Previous : Versatility Challenge for the C3 WRC
Next : KCMG aims to run strong for Nissan’s home event at the Suzuka 10 Hours