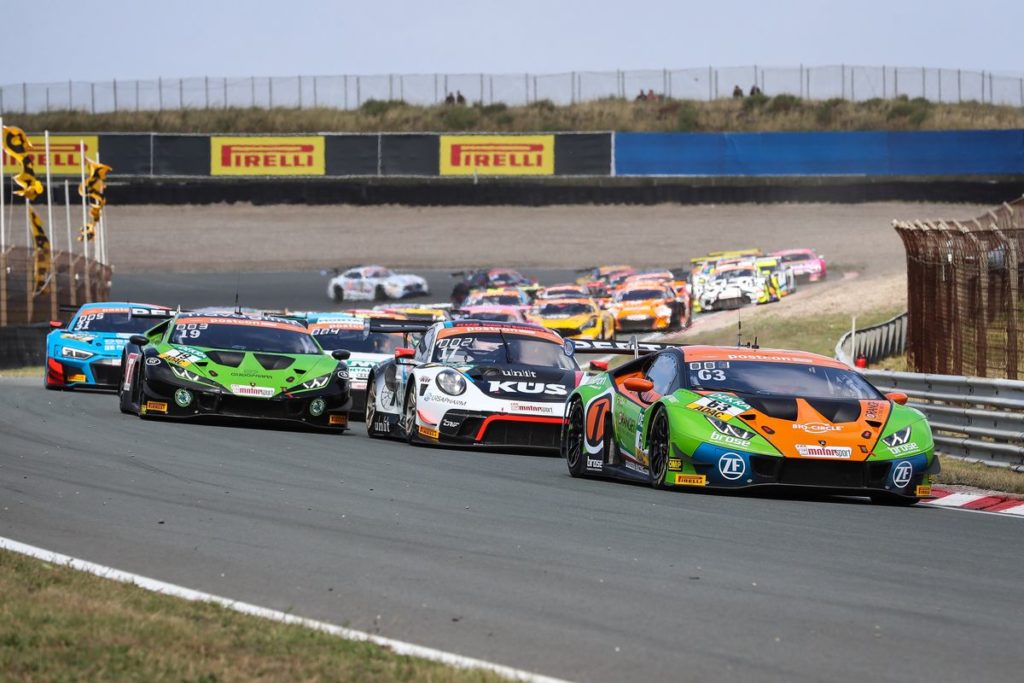 There was high drama on the Dutch North Sea coast as the seventh ADAC GT Masters race of the season at Zandvoort was won by the narrow margin of 0.365 seconds. In a thrilling race, Mirko Bortolotti (29, ITA) and Christian Engelhart (32, GER, both Orange1 by GRT Grasser) in a Lamborghini Huracán GT3 Evo beat off a strong challenge from Porsche drivers Timo Bernhard (38, GER) and Klaus Bachler (27, AUT, both Küs Team75 Bernhard). Third place went to Michele Beretta (24, ITA) and Marco Mapelli (32, ITA) in another Orange1 by GRT Grasser Lamborghini. “We’ve worked hard for this,” said Bortolotti. “It feels really good to win here. It was about time that we returned to winning ways.”

Pole position, lights-to-flag victory and fastest race lap might suggest that Mirko Bortolotti and Christian Engelhart had everything under control as they took their first win of the season, but the Lamborghini pairing had a fight on their hands right through to the last few metres. Bortolotti started from pole position in sunny but gusty conditions and successfully asserted his lead. He then went on to pull out a gap of just over four seconds on the pursuing bunch, but the cushion was nullified by the deployment of the safety car twice within the space of a few laps for the recovery of stricken vehicles. His partner Engelhart took over at the mandatory pit stop and retained the lead but immediately came under pressure from the Porsche driven by Timo Bernhard and Klaus Bachler. Meanwhile, Michele Beretta and Marco Mapelli in the second of the two Orange1 by GRT Grasser Lamborghinis were closing in, ready to pounce. Bachler attacked Engelhart several times during the closing stages of the race but was unable to pass. The Lamborghini man eventually took the chequered flag by the narrow margin of 0.365 seconds. It was the first win of the season for the Italian brand and the first ever triumph in the ADAC GT Masters for the new Huracán GT3 Evo. It was also win number ten for Engelhart in the Super Sports Car League and number four for co-driver Bortolotti.

Bernhard and Bachler followed close behind to notch up their second P2 finish of the season. Beretta and Mapelli were third with a deficit of just under 1.8 seconds on the winners at the finish line. It was their first podium of the season and Beretta’s maiden victory in the Pirelli Junior class for young drivers under 25.

Fourth place went to Mike David Ortmann (19, GER) and Markus Winkelhock (38, GER, both BWT Mücke Motorsport) in the best-placed of the Audi R8 LMS contingent. They finished ahead of Max Hofer (20, AUT) and Christopher Mies (30, GER, both Montaplast by Land-Motorsport) also in an Audi. The only BMW in the field was sixth; Nicolai Sylvest (21, DK) and Jens Klingmann (29, GER, both MRS GT-Racing) had earlier moved up into fourth place in their M6 GT3 after having started from 17th on the grid but lost two places with two laps remaining.

Points for seventh place went to Philip Ellis (26, GB) and Fabian Vettel (20, GER, both Mann-Filter Team HTP) in the best-placed Mercedes-AMG GT3. Their race was outstanding for a heroic charge from P23 on the grid. Two more Audi R8s were next across the line: Nikolaj Rogivue (23, CH) and birthday boy Frédéric Vervisch (33, BEL, both BWT Mücke Motorsport) took P8 ahead of Filip Salaquarda (35, CZ) and Frank Stippler (44, GER, both Team ISR). Rolf Ineichen (41, CH) and Franck Perera (34, FRA, both Orange1 by GRT Grasser) completed the Top Ten. As a result, Ineichen also secured victory in the Pirelli Trophy classification, ensuring that both the overall win and the two victories in class went to members of the Orange1 by GRT Grasser squad.

Championship leaders Patric Niederhauser (27, CH) and Kelvin van der Linde (23, ZA, both HCB Rutronik Racing) driving an Audi finished 17th and therefore out of the points but still came away with the unofficial title of ‘half-time champions’, as their closest rivals also failed to score. Markus Pommer (28, GER) and Marvin Kirchhöfer (25, CH, both Callaway Competition) were forced to retire their Corvette C7 GT with ignition problems but nonetheless retain their runner-up spot.

Comments from the winners:
Mirko Bortolotti (Orange1 by GRT Grasser, Lamborghini Huracán GT3 Evo):
“I managed to book a mega pole this morning, putting us in the ideal position for the start. I then did not put a foot wrong in the race. I think the way we’ve performed so far this year has been more or less spot on throughout. Unfortunately, we’ve not been able to translate that into race wins or top results, but we certainly managed it today, so I’m feeling very pleased.”

Christian Engelhart (Orange1 by GRT Grasser, Lamborghini Huracán GT3 Evo):
“The race was a real thriller. Mirko managed to pull out a small gap initially, but then the safety car came out and our lead vanished. I had to work really hard when I took over the car. The strong wind meant that you never knew whether the rear end was going to step out or not. It wasn’t easy. Klaus kept increasing the pressure on me towards the end, and we had quite a scrap. He might even have been a bit faster towards the end, but we were able to defend the lead. I’m delighted with our success.”

0 0 0 0 0
Previous : Fast & unforgiving: DTM prepares for British stress-test at Brands Hatch
Next : Four in the top five: Audi strong on the island