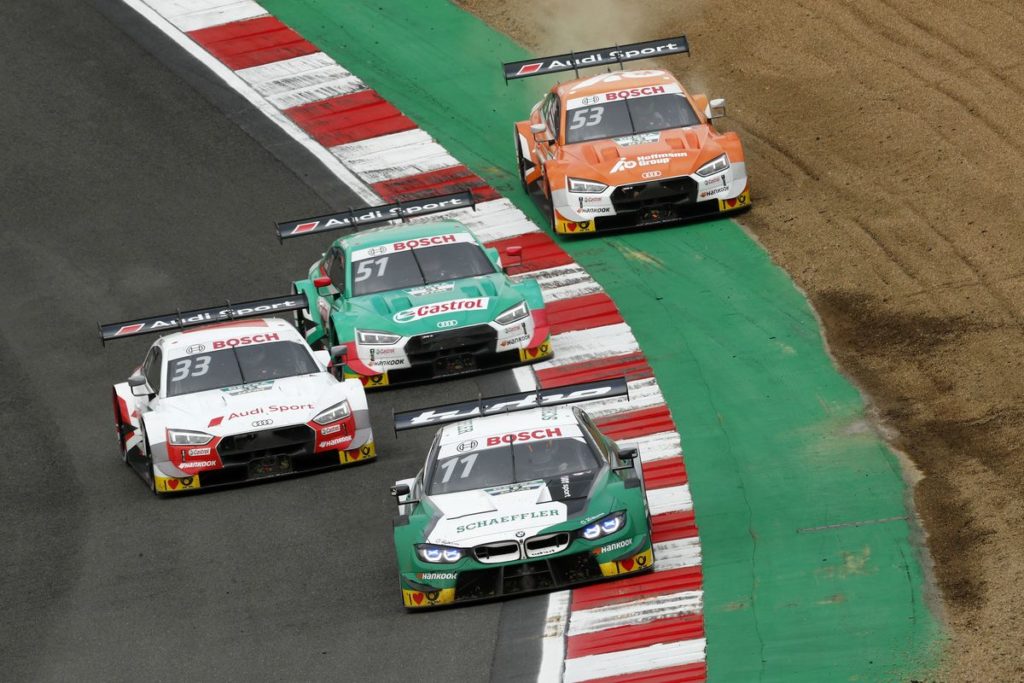 By the tiniest of margins, BMW’s Marco Wittmann (GER) took victory in the DTM’s opening race of the Brands Hatch weekend, ahead of Audi drivers René Rast (GER) and Nico Mueller (SUI).

The race teetered in several directions as each of the DTM’s three manufacturers battled for supremacy around the classic Kent circuit. Ultimately, Wittmann triumphed – by 0.3s – after Rast relentlessly chased him down on the final time, reducing the gap to the leader by five seconds.

Wittmann’s victory and pole position enabled him to narrow Rast’s championship points’ lead: Rast remains in the lead, with 178 points from Müller (151 points); Wittmann sits third, on 146 points after achieving the maximum of allocation 28 (25 for the win; 3 for pole) for the third time this year.

Audi’s Müller maintained his points-scoring consistency – collecting points in the 11th successive race. No other driver has managed to score in every race of 2019.

Paul Di Resta, who won the Sunday race at Brands Hatch back in 2018, became an unlikely contender for victory on Saturday. From fourth on the grid, he made a perfect start to lead into Paddock Hill Bend. In fact, his start was deemed too perfect – race control awarded him a five-second pit-stop penalty after judging that he has jumped the start.

Before serving the penalty, however, the Scot led commandingly, pulling clear of the chasing Wittmann, and offering fans a tantalising glimpse at what might be possible once the R-Motorsport Aston Martin effort is fully refined. His afternoon ultimately went unrewarded when he was forced to retire with an engine issue late into the race.

“For the fans, this surely was a thrilling showdown, but from my perspective, victory was never under threat. Of course, my tyres degraded towards the end after we had come in early for our pit-stop – and the drivers coming up from behind had unlimited use of push-to-pass and DRS on the final laps of the race, unlike the leader. But, up until that point, I had nicely managed my margin. It was good to see Aston Martin leading the race in the early stages, my compliments to them.” – Marco Wittmann, winner

“I had hoped for some more laps! We predicted 43 laps, but it turned out to be 42 in the end. That probably was the one lap I was missing… Having stressed my tyres too much at Assen, I still had a bit of a margin here. It wasn’t to be. Nevertheless, I am happy with second place.” – René Rast, 2nd place

“Today, we’re very happy with third place. After the difficult qualifying and only eighth place on the grid for us, a podium finish is a strong result. I couldn’t have done better. With an early stop, we probably opted for the right strategy. I was able to manage the tyres really well.” – Nico Müller, 3rd place

Personalised adjustment of the steering wheel is possible. The transmission is controlled by paddles mounted behind the steering wheel. These can also be used to control radio communication, the liquid pump, the pit-lane speed limiter, the water-spray system for cooling the brake callipers, the windscreen wipers and the separate activation of the DRS and push-to-pass systems.

… a certain exceptional weather situation. Wind with gusts of up to 90 kph and seemingly all seasons in only one morning were a real challenge for teams and drivers. The three DTM manufacturers are always well-prepared coming to Brands Hatch. R-Motorsport/Aston Martin, Audi and BMW have all commissioned meteorology agencies to be up to date with the latest weather situation. At Brands Hatch, the brands are also collecting data themselves with their own weather stations that they have installed in their respective paddock areas. On top of that, they have the so-called spotters, who, spread around the track, can immediately report latest developments to the pits.

0 0 0 0 0
Previous : Marco Wittmann claims his fourth win of the season for BMW at Brands Hatch – Three BMW M4 DTMs in the top ten.
Next : Audi one-two and first ADAC GT Masters podium for Vettel at Zandvoort