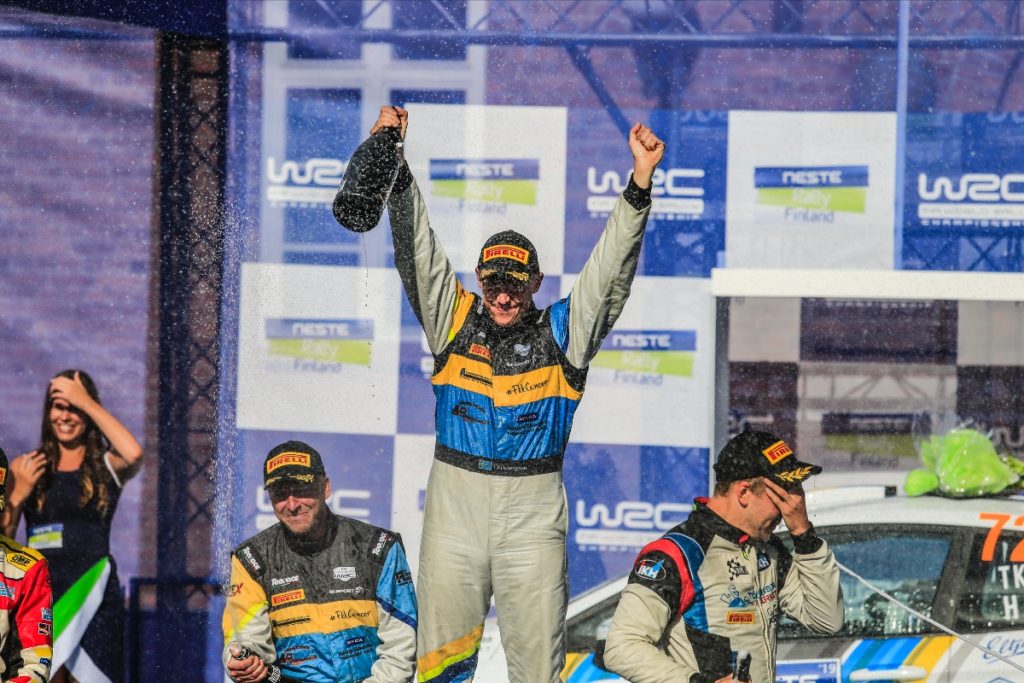 Tom Kristensson became the first double winner of the 2019 FIA Junior WRC Championship by taking a mistake-free and commanding victory on Rally Finland.

In a rally that was not short of drama or excitement, Kristensson kept his cool throughout and picked up eight stage wins and championship points.

Dennis Rådström looked set to finish second until SS22 where he crashed, damaging his radiator forcing him to retire. Rådström’s championship hopes are still very much alive, thanks to double points on Wales Rally GB – the FIA Junior WRC championship finale.

Jan Solans started the rally and looked to be a contender for victory finishing Friday’s stages with three stage wins and 24.2 seconds behind Kristensson. On Saturday Solans had a difficult morning loop, almost rolling on SS13. He regrouped for the second pass and kept his rally clean for the remainder of the day, climbing back to third and taking a win on SS15. Sunday saw Solans take another stage win on SS21 and promoted to second following Rådström’s retirement.

Sami Pajari, AKK Sport’s Flying Finn Future Star Award winner, impressed many onlookers when he claimed his maiden FIA Junior WRC stage win on SS3. The Finn was vying for a top-five position and claimed another stage win on SS13 until his rally ended on SS16 by hitting a rock and rolling off the stage and out of the rally. Fellow Finn and Flying Finn Academy driver, Aleksi Royhkio, showed good speed on his home rally and was able to bring home a very respectable fourth position.

Julius Tannert snatched the opening stage win on the Harju 1. It would be Tannert’s only stage win of the event as a puncture hampered him on SS2 before his rally ended when he rolled on SS18 surrendering any realistic ambitions of winning the 2019 FIA Junior WRC Championship.

Despite Kristensson winning SS5, Raul Badiu had many onlookers watching his split times with anticipation as he looked to collect his maiden stage win but finished just 0.3 seconds from Kristensson’s time. He was set to earn his illusive first stage win on SS6, 2.4 seconds up on the field through his split times until disaster struck. The Romanian had a high-speed crash, retiring from the rally and suffered two broken ribs and a concussion. All at FIA Junior WRC wish him the speediest of recoveries.

Saturday would see a day of unprecedented action as seven cars failed to make it to the finish line of SS19, the last stage of the day.

Kristensson would go on to extend his lead on Saturday, even though he only took two stage wins, his consistent pace would average out faster than the pace of his rivals, concluding the day with a 25.2-second lead over Dennis Rådström.

Roland Poom, like Badiu, appeared to be on the cusp of claiming his maiden Junior WRC stage win throughout Rally Finland. With those around him faltering on Saturday, Poom seemed to go from strength to strength and was classified third at the start of SS19 until he joined the list of retirees shooting off the edge of a stage and head-on into a tree. Despite failing to finish the last stage of the day, Poom only lost one position and following Rådström’s retirement on Sunday he was promoted to the third and collected his second podium of the season.

Martins Sesks would take the final stage win of the rally denying Sean Johnston of his first stage point by 2.8 seconds as Tom Kristensson finished fifth to win his second FIA Junior WRC rally by a comfortable margin.

FIA Junior WRC Championship Manager, Maciej Woda, said:
“First and foremost, I would like to wish Raul Badiu a speedy recovery after a very heavy accident on Friday. Raul was very impressive on Thursday and Friday, I expected him to take a stage win at some point this weekend, so it is a great shame. The whole Junior WRC team is looking forward to seeing Raul back in action as soon as possible. Looking to the rally now, what a rally! I don’t think anybody could have predicted that we would have had this much action and unpredictability. Rally Finland has proven to be the most challenging rally yet for all of our drivers which is largely thanks to its high speeds that require a lot of experience and high concentration levels. For Tom to be able to deliver such a faultless performance among all the craziness around him is an incredible achievement. The championship finale is set to be a thriller on Rally GB now, six drivers have a mathematical chance of winning the championship. In reality there three drivers with a very real chance of winning, just one point separates Tom and Jan with Dennis 24 points down. This is rallying though, anything can happen, I am really looking forward seeing how it all plays out in October!”

1.Tom Kristensson / Henrik Appelskog 02:55:17.2
“The rally has been so good from the first meter and we have been so consistent and so fast, but still safe. No moments and no troubles. I really like this surface, this kind of fast roads and the jumps. When you need to have these perfect lines for every kind of corner, you need to think so long in front of you.”

2. Jan Solans / Mauro Barreiro + 01:28.0
“We are happy because we had really good pace on our first Rally Finland, we did have some big moments and luck to finally be here. We finished second and it is really good for the championship.”

3. Roland Poom / Ken Jarveoja + 11:54.8
“After we went to the service park on Saturday and saw that there was basically a graveyard of cars I thought that our rally has not been so bad and we are in a pretty good position. To finish third after yesterday’s action is amazing.”

4. Aleksi Royhkio / Ville Mannisenmaki + 13:25.2
“It was a long rally, that’s for sure. It was very rough and very challenge but I learned a lot and will definitely be back next year.”

5. Sean Johnston / Alex Kihurani + 13:42.3
“I feel that we have somehow inherited this place a little bit because lots of people went off but that’s the name of the game. I’m really proud of our second fastest time on the power stage, after a weekend of really building our pace, that was amazing.”

6. Enrico Oldrati / Elia de Guio + 19:38.4
“We have been very fortunate this weekend, we rolled but didn’t damage the car too much. It’s an experience, we really enjoyed this beautiful rally at high speed.”

7. Nico Knacker / Michael Wenzel + 38:33.4
“It wasn’t an easy rally for us, the stage times weren’t the best but I know this myself. I know where and what I need to work on which is part of the learning experience.”

8. Fabrizio Zaldivar / Fernando Mussano + 53:39.3
“Yesterday I had a pacenote error and that cost me the entire day. Today we restarted the rally and were able to do some really good and competitive times that were a big improvement on previous rallies.”

10. Tom Williams / Phil Hall + 1:20:02.7
“We’ve had a lot of issues and problems and we know why they happened. Everything worked really well but it was the pressure in my head that I really struggled to deal with, we fought through this and carried on pushing.”

RETIRED:
Dennis Rådström / Johan Johansson
“We had some good confidence and pace notes so it was very enjoyable. It’s sad that it ended the way it did but that’s rallying, like I said last year, you need to get the emotion out of the way first and then move on.”

Sami Pajari / Antti Haapala
“The way it ended is obviously disappointing, but I need to try and focus on the positives and above all I would like to thank everyone who made this rally possible for me. I really appreciate this and definitely I have learned so much. To win two stages was a big surprise for me and I am very happy about that.”