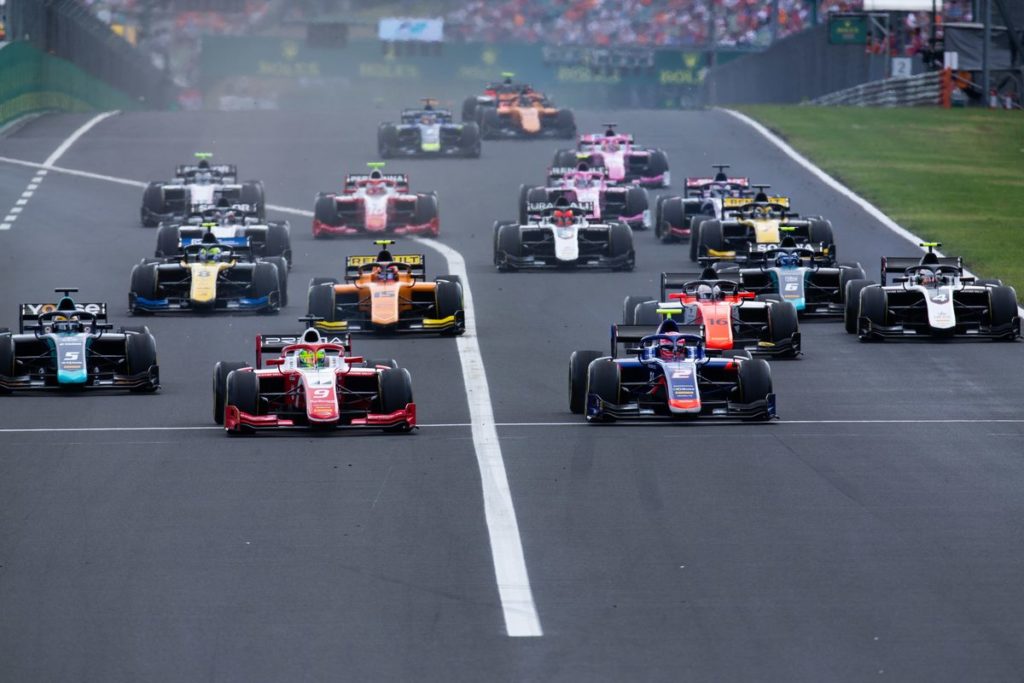 Mick Schumacher became the second rookie winner of this season’s FIA Formula 2 campaign with a commanding performance from lights-to-flag in the Sprint Race that required every inch of his defensive abilities.
The PREMA racing man beat out the experienced Nobuharu Matsushita to earn his maiden F2 win and a first taste of champagne for PREMA this season. DAMS’ Sérgio Sette Câmara came home in third, having pushed and prodded Matsushita all the way, in the tightest of front threes.
The German had been handed reverse grid pole for the second time this season, thanks to a strong 8th place finish in yesterday’s Feature Race and he got away smoothly off the line, despite the Carlin attached to his rear wing.
Matsushita, starting P2, waited until the first turn to make his move and skidded around the outside of the German, but he ran out of track and remained second. Sette Câmara had forced his way ahead of Jordan King when the lights went out for third, while Nikita Mazepin rose four places to break into the points’ paying places.
Schumacher set the fastest lap in his attempts to put space between himself and Matsushita, but the Japanese driver reacted by beating his time around the Hungaroring and slicing into the distance between them. Less than a second behind him was Sette Câmara, in an intense three-wary tussle for first.
With thick clouds appearing above, the track temperature fell from 41 to 35 degrees, adding a further challenge to Schumacher’s defence of P1. Still, he clung on, but Matsushita remained within five tenths of him and refused to let the German breathe.
The Brazilian in third had the same tactic, but couldn’t find a way through at Turn 3 when the two went side-by-side and the Carlin came out ahead.
Championship contender Luca Ghiotto had been one of the fall guys in Mazepin’s rise to 8th, but he was able to regain the spot when the ART man lost pace on lap 18. Callum Ilott and Guanyu Zhou both followed the Italian through, after the Russian had warned his team that he was in trouble. Ghiotto’s overtake of the Russian put him in a 1-2-3 with title rivals Nicholas Latifi and Nyck De Vries in a three-way fight for 6th.
Matsushita remained in the shadow of Schumacher in the chase for P1 and was lapping two tenths faster than the German, beating him in both sectors 1 and 2, but could still not find a way through. The battling Ferrari F1 junior fought the Honda Dream driver all the way to the chequered flag and came out on top, thanks to a defensive masterclass.
Following closely behind was Sette Câmara, who beat out British duo Jordan King and Jack Aitken. De Vries, Latifi and Ghiotto finished 6th, 7th and 8th, as Guanyu Zhou and Callum Ilott completed the top ten.
De Vries remains ahead in the Driver’s Championship, with 30 points more than Latifi in second, who has 166. Sette Câmara climbs back to third on 141 thanks to his podium finish, while Ghiotto has 135 and Aitken 134. In the Teams’ Championship, DAMS still lead on 307, ahead of UNI-Virtuosi on 242 and ART Grand Prix on 202. Campos Racing are 4th with 164 and Carlin 5th with 145.
The F2 Championship takes a brief break ahead of Round 9 in Spa-Francorchamps, when the drivers should return refreshed and ready to battle it out in the final four rounds of 2019. Having returned to winning ways in Budapest, Latifi will hope to further chop into De Vries’ Championship lead when racing returns at the end of August.
2019 FIA Formula 2 Championship – Sprint Race provisional classification