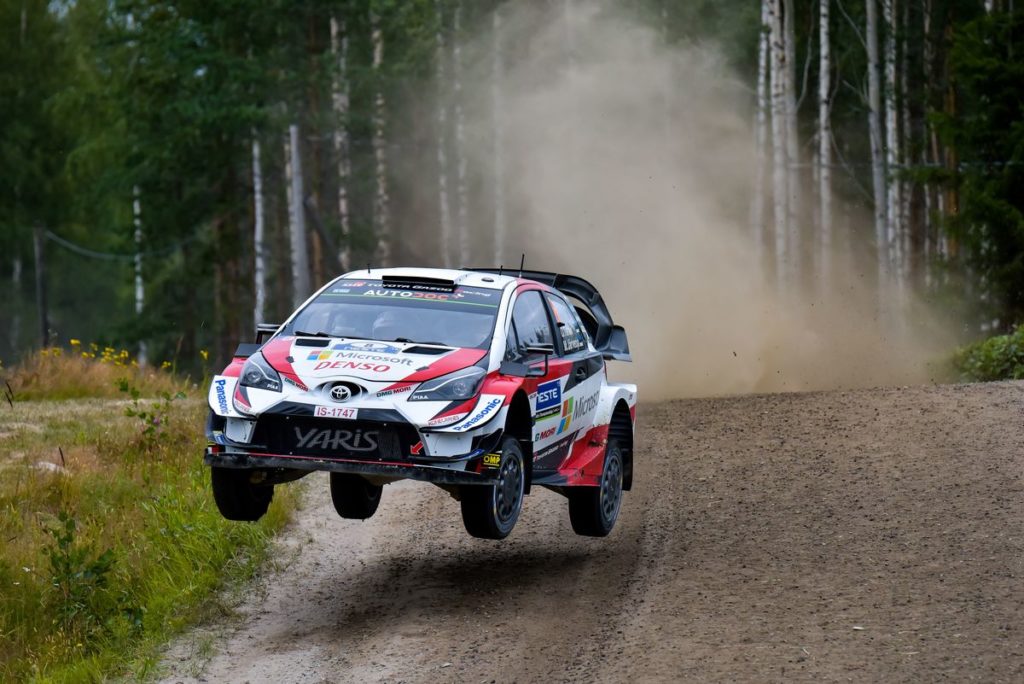 The Toyota Yaris WRC continues to lead on its home roads on Finland with just four stages remaining. After moving up into first place during this morning, FIA World Rally Championship leader Ott Tänak takes an advantage of 16.4 seconds into the final day, while Jari-Matti Latvala also occupies a podium position in third overall.

Latvala had begun the day in the rally lead, 1.2 seconds ahead of team-mate Kris Meeke with Tänak just a further 1.4s back in fourth place. Tänak, now benefitting from a better road position than he had on Friday, took the lead by winning the morning’s first stage, only for Latvala to claim it back on the following test. At that point, the Toyota trio were separated by just 0.6s.

A large rock on the outside of a fast right-hand bend in SS14 caused problems for two of the drivers. Meeke hit it and broke his car’s left-rear suspension, forcing him to retire for the day, although he will restart tomorrow. Latvala also made contact with the rock, damaging a wheel and losing around 13.9 seconds to Tänak.

Tänak was able to manage his newly-found advantage during the afternoon, while Latvala adopted a more cautious approach and has a margin of 21.7 seconds over fourth place.

Quotes:
Tommi Mäkinen (Team Principal) : “Overall it has been a very good day: We are a step closer to achieving another great result here in Finland. We saw Ott’s true speed this morning with a better road position. It seems like Esapekka has been keeping the pressure on this afternoon, so he has had to keep pushing a little bit, but he is looking fairly comfortable. Of course, it was disappointing what happened to Kris and Jari-Matti this morning. There was still a long way to go, they had good speed and they could have really controlled things. The main thing for Jari-Matti now is to finish the rally at a comfortable pace without any mistakes.”

Ott Tänak (Driver car 8) : “It’s been a really good day. This morning it was really intense as everyone was pushing hard. It was good that we were able to build a bit of a gap to Esapekka [Lappi], as this afternoon he did a very good job, and we had to follow his pace. At the same time, I felt really comfortable in the car and it was working very well. In the very rough places I was a bit more careful, but in the smooth and fast sections I really enjoyed it and we had a good rhythm. I think our advantage is good but there is still some way to go so there is still a lot of focus needed.”

Jari-Matti Latvala (Driver car 10) : “We had a fantastic morning speed-wise, fighting for the lead with our team-mates, and I had a really good feeling with the car. But in Kakaristo I was too fast in a right-hander, ran wide into a ditch and hit a big rock. In the afternoon, I knew that I couldn’t afford to make any more mistakes so I tried to find a comfortable speed where I would be avoiding risks. At the same time Esapekka was able to raise his pace, so I couldn’t match that. I’m a bit disappointed that I couldn’t find the right rhythm, but to get the points is the most important thing: To be on the podium tomorrow would be a really important result for myself, but also for the team.”

Kris Meeke (Driver car 5) : “It had been an incredible fight from the beginning of the rally, and I was enjoying it again this morning: I was in a good rhythm and the car felt phenomenal. In Kakaristo, we came to a fast, fifth-gear right-hand corner, and I just dropped a wheel off the camber on the outside. Normally that wouldn’t be a big problem but there was a massive rock just sitting in the ditch, and I didn’t know it was there, so it was a big surprise. I’m gutted: When the battle is so close like that, and everyone’s trying to do their best for the team, it’s very disappointing to have to stop.”

What’s next?
The final day of the rally is made up of four stages in total, with the Laukaa and Ruuhimäki tests to each be run twice. Both stages are between 11 and 12 kilometres in length.

Key stage: Ruuhimäki (SS21 & SS23, 11.12 kilometres)
Miikka Anttila (Co-driver car 10): “I think Ruuhimäki has the biggest jumps of the whole rally. It starts with the small road that was introduced for the first time last year. Later on we join the old Ruuhimäki stage, which is not a very big road but it is pretty fast, before we come to the big road with the spectacular jumps that this stage is famous for. The last part runs through a sandpit to the finish, which is over a big artificial jump.”