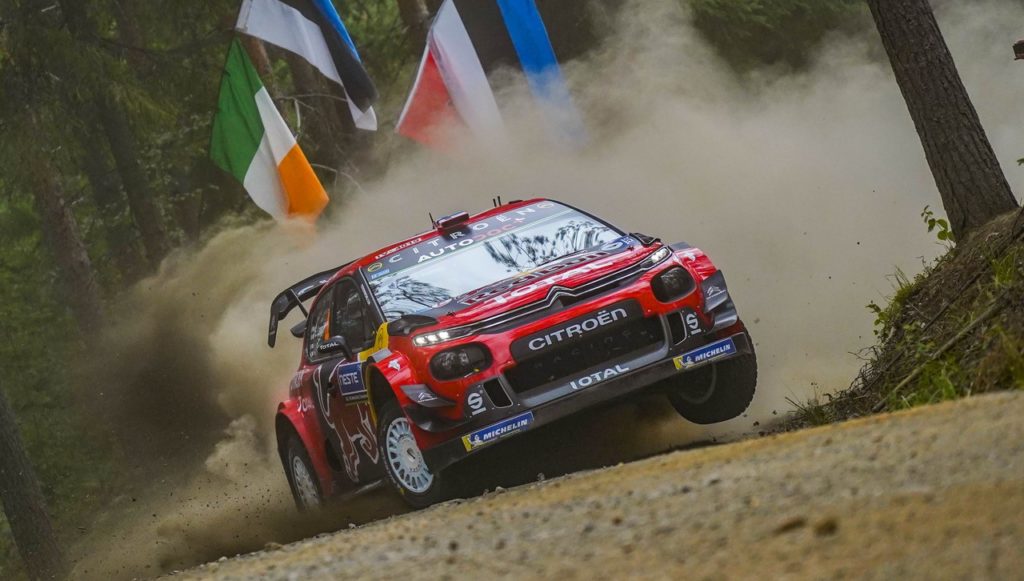 One of the big movers on Saturday’s leg, notably grabbing two stage wins, Esapekka Lappi and Janne Ferm climbed to second overall and are now ideally placed to claim the C3 WRC’s eighth podium of the season. Despite suffering the effects of overnight illness, Sébastien Ogier nonetheless managed to make up two positions, to end the day fifth overall. He and Julien Ingrassia now have their eyes set on fourth place…

A combination of iconic, ultra-fast stages (Päijälä and Kakaristo) and other more technical tests (Leustu and Pihlajakoski), with almost ten new kilometres on the latter, day two promised to be the biggest challenge of the weekend. Its length (132.98 kilometres of timed stages) and the range of difficulties featured were only exacerbated by the intensity of the battle at the front.

In these testing conditions, Esapekka Lappi and Janne Ferm once again produced a talented, masterful performance in the C3 WRC. Whilst keeping the second-placed crew under pressure in the morning loop, notably with two second fastest times, they upped the pace again in the afternoon. Perfectly at one with the French WRC on these roads, which call for total confidence behind the wheel,the Finns won the opening stage of the second loop (SS16) to move into second place, and hold honorary first place among the Finnish crews, always highly motivated at home. They subsequently went on to consolidate their position throughout the rest of the day, taking another stage win on Kakaristo (18.70km), the modern version of the legendary Ouninpohja stage. Now 12.4s ahead of their nearest rival and 16.4s behind the leader, they will head into tomorrow’s short final leg in a good position to equal their best result so far with Citroën (runners-up in Sweden).

Decidedly off colour after being up all night with sickness, Sébastien Ogier –perfectly supported by his loyal co-driver Julien Ingrassia – nonetheless remained determined to achieve his aim of moving up the standings. The six-time world champions’ efforts were rewarded as they moved up from seventh to fifth overall on the day’s third stage. They even managed, albeit briefly, to snatch fourth place in the afternoon after setting the second fastest time on SS16, proof of their unwavering commitment and the competitiveness of the C3 WRC at this event. Although they were unable to hold onto the place until the end of the leg, you can be sure that Sébastien will spend tonight resting and recharging his batteries, before attempting to make up the 2.6s that he needs to reclaim fourth place.

Sunday’s fairly short (45.74 kilometres in four stages) final leg looks set to provide plenty of action again. The highlight will undoubtedly be the impressive, seemingly never-ending series of jumps on Ruuhimäki: one of the ultimate challenges in rallying!

Pierre Budar, Citroën Racing Team Principal : “Esapekka and Janne once again had a perfect leg, managing to improve their position in the standings after what was yet another intense day of racing. Apart from their undoubted speed, they have shown great race management and maturity, pushing when the time was right. Finishing on the podium at their home round would be just rewards for their very strong performance. Sébastien has nothing to be ashamed of either, especially given his condition. I am sure that tomorrow, along with Julien, he’ll give it absolutely everything, as usual, to come away from this round with the maximum number of points.”

Sébastien Ogier, Citroën Total WRT driver : “I’m pleased that it’s over because I was running really low on energy this afternoon. I can’t wait to get to bed, to be honest. I had to really push myself all day so I’m glad to have made it through the leg without making any mistakes because it was sometimes very difficult to keep up the concentration. Tomorrow will be another day and I hope that I will be able to recover sufficiently tonight so that I can do myself justice and fight all the way to the finish.”

Esapekka Lappi, Citroën Total WRT driver : “Obviously, it’s been a very positive day for us! After what happened in the morning loop, I was expecting to suffer on the second runs on these wide and fast stages, but I really went for it and it has worked out pretty well for me so far. We found the right balance to push without overdriving the stages or drifting outside of the lines. I’m going to continue at the same pace tomorrow and am absolutely determined to secure the result.”

0 0 0 0 0
Previous : Hyundai Motorsport has enjoyed another encouraging day at Rally Finland
Next : WRC – Tänak takes over on top for Toyota Gazoo Racing