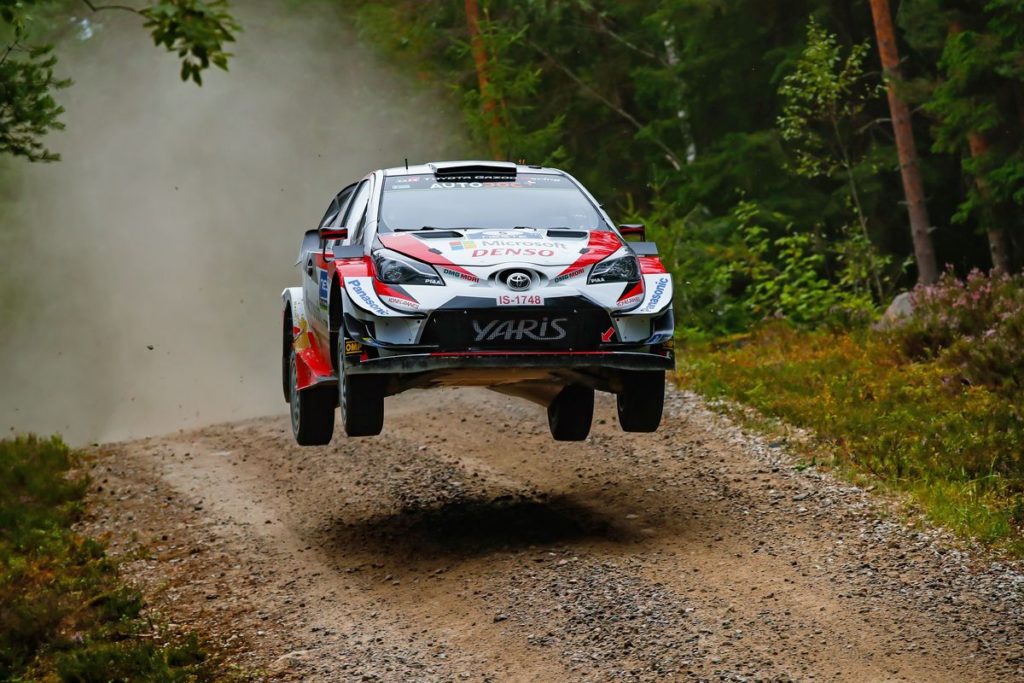 All three Toyota Yaris WRC drivers feature in an incredibly close lead battle after the first full day on the ultra-fast forest roads of Rally Finland. Jari-Matti Latvala leads overnight, 1.2 seconds ahead of team-mate Kris Meeke, with the team’s championship leader Ott Tänak just 2.6s away from the lead in fourth position.

The day featured 10 stages in all, and the Yaris WRC set the fastest time on all but two tests. Despite running first on the road due to his championship position, Tänak was able to hold the lead throughout the opening loop, returning to service in Jyväskylä with a margin of just over five seconds over his two team-mates.

On the second pass of stages in the afternoon loop, Tänak was at more of a disadvantage, encountering roads that had been heavily rutted after the whole field had passed through earlier in the day. Latvala immediately moved into the lead and managed to hold it until the end of the day – after winning six stages in total – even though the top four were covered by just 0.6s at one point.

Quotes:
Tommi Mäkinen (Team Principal)
“It has been a brilliant fight today. We know that the time gaps here in Finland are often very small, but I can’t remember when it was quite so close like this. All three of our drivers have been doing a great job, with such small differences between them: It has been amazing to watch. But we are not alone in the fight, as Esapekka has also been very fast, so they will all need to keep pushing tomorrow.”

Ott Tänak (Driver car 8)
“Generally I’m feeling pretty good at the end of the day. The conditions were challenging running first on the road, but in the morning I had a good flow from the beginning, the car was working well and so I could focus on the driving. This afternoon the conditions were much tougher, and it was a bit frustrating as I was pushing hard and we lost a few places. But we are still very close, and tomorrow we should have a much better road position than we had today, so everything is to play for.”

Jari-Matti Latvala (Driver car 10)
“It’s been a really good day. There were a couple of stages where the time was a little bit down, but generally I was able to have a strong performance. It has been so tight and the pressure has really been on, so it’s pleasing to be able to keep up the speed and not make mistakes when you’re trying to find the difference anywhere you can. Tomorrow I think the morning loop is going to be crucial because there are some new sections, and the profile of the road is generally a bit different: Wider with more crests and jumps.”

Kris Meeke (Driver car 5)
“It’s been a good day, I’ve really enjoyed it. In Finland it’s so important to make a good start and get away with the lead group, and we were able to do that this morning. The stages and the pace-notes were new to me on the first pass, so I could be a lot calmer this afternoon with that knowledge. I think there was a bit more road cleaning on the second pass but I think we made the most of our position. It’s so close between the top four, so it’s going to be exciting to see how it develops tomorrow.”

What’s next?
Saturday is the longest day of the rally in terms of distance, with 132.98 competitive kilometres across two loops of four stages. The loop ends with the only new stage on this year’s Rally Finland itinerary, Leustu, which returns for the first time since 2014.

Key stage: Kakaristo (SS14 & SS18, 18.70 kilometres)
Miikka Anttila (Co-driver car 10): “Kakaristo is an iconic stage from Rally Finland. This year it has a new beginning, which hasn’t been used since 1997. After that it comes to the wide Ouninpohja road which is very well-known, but this year we don’t have any jumps on that road, so it’s very unusual to have it in this kind of configuration. Then we come to the famous Kakaristo junction, where there’s always a lot of people watching, and join a smaller, more gravelly road.”