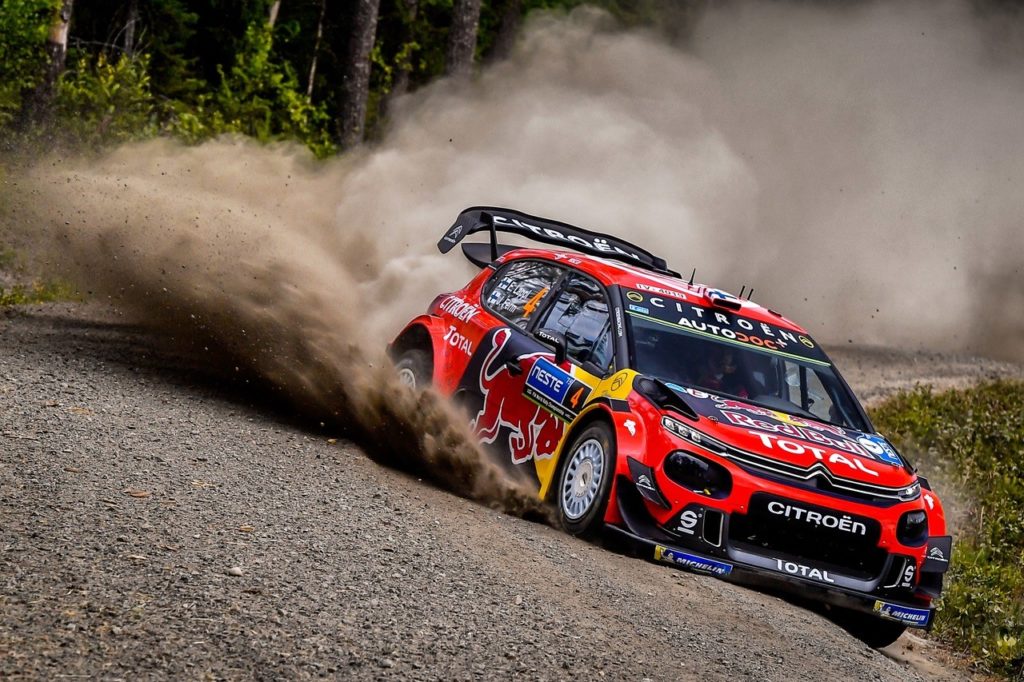 Totally at ease in the C3 WRC at their home round, Esapekka Lappi and Janne Ferm ended today’s opening leg third overall and are well placed to potentially challenge for overall victory. With very little between the times of the leading crews, the top four separated by just 2.6s, Ogier and Ingrassia ended day one seventh overall – despite the disadvantage of their road position – just 12.9s off the podium.

After a super-special stage kicked off the rally in the streets of Jyväskylä yesterday evening, the competitors got down to the serious business today, with an opening leg over a competitive distance of 126.55km, held on the slipperiest and most technical stages of the weekend.

Local heroes Esapekka Lappi and Janne Ferm performed brilliantly all day in their C3 WRC, proving to be the only crew able to thwart the local manufacturer’s plans to dominate. After setting a second fastest time on the day’s opening test, just a tenth of a second off the pace, the Finns made it to the mid-leg service in fourth position, 6.9s behind the leader. They went even better in the afternoon as they upped their game. Three consecutive second fastest times, each time less than six tenths off the stage-winning time, saw them briefly move into second place before ending the day in third overall, just 2.4s off the lead. An impressive performance that augurs very well for the winners of the 2017 Rally Finland, with tomorrow featuring certain stages that the pair particularly like.

Forced to run second on the road, and therefore to contend with sweeping loose gravel off the road, Sébastien Ogier and Julien Ingrassia nonetheless reiterated their determination to score heavily this weekend, immediately grabbing fifth place. Although they had dropped down to seventh position by the end of the second loop, which was even more of a serious disadvantage for the early runners, they are still just 1.1s adrift of fifth position and 12.9 off the podium. Their position in tomorrow’s running order (4th) should enable them to express themselves better in the C3 WRC, which is undeniably competitive on the local roller-coaster roads!

With the gaps recorded between the leading crews at the end of this opening leg, day two promises to be explosive! Tomorrow’s leg is also the longest of the rally, over a competitive distance of 132.98 kilometres. Contested on wider, harder roads than today, day two will see the crews tackle two runs on Kakaristo (18.70km), the modern, shorter version of the iconic Ouninpohja stage.

Pierre Budar, Citroën Racing Team Principal : “Immediately on the pace, Esapekka and Janne managed the impressive feat of upping their game again in the afternoon. They are now ideally placed to fight their corner in what looks like being an almighty scrap for the win. At their home round, they clearly enjoyed themselves in the C3 WRC, whilst also keeping a cool head, and they undoubtedly have the talent to keep it up. It also confirms the very good preparation work done before the event by the entire team. Meanwhile, Sébastien and Julien had a bit more trouble with being among the first few crews on the road, but the gaps are so small that anything is still possible for them too, especially as they have already proven many times before that they are real fighters – they won’t give an inch right to the finish line.”

Sébastien Ogier, Citroën Total WRT driver : “I think we had a very good day. I was comfortable in the C3 WRC, but our position in the running order certainly didn’t make our lives any easier. I would’ve loved to end this first day in a better position so we could start further down the running order tomorrow, but I will at least have more cars ahead of me than today. It’s still very tight, so we have to keep pushing as hard as we can. We’re still in the fight to score some big points.”

Esapekka Lappi, Citroën Total WRT driver : “It’s good to be back among the frontrunners and on the pace, especially at this rally, which means so much to us as Finns! My C3 WRC was perfect today and I really enjoyed driving on these stages. It’s crazy that the gaps are so small after such a long day. It looks like it will be a huge battle at the front tomorrow, but you can count on us to keep fighting!”

0 0 0 0 0
Previous : WRC – Hyundai Motorsport is fighting inside the top-five at Rally Finland
Next : Latvala leads a thrilling Finnish fight for the Toyota Yaris WRC trio