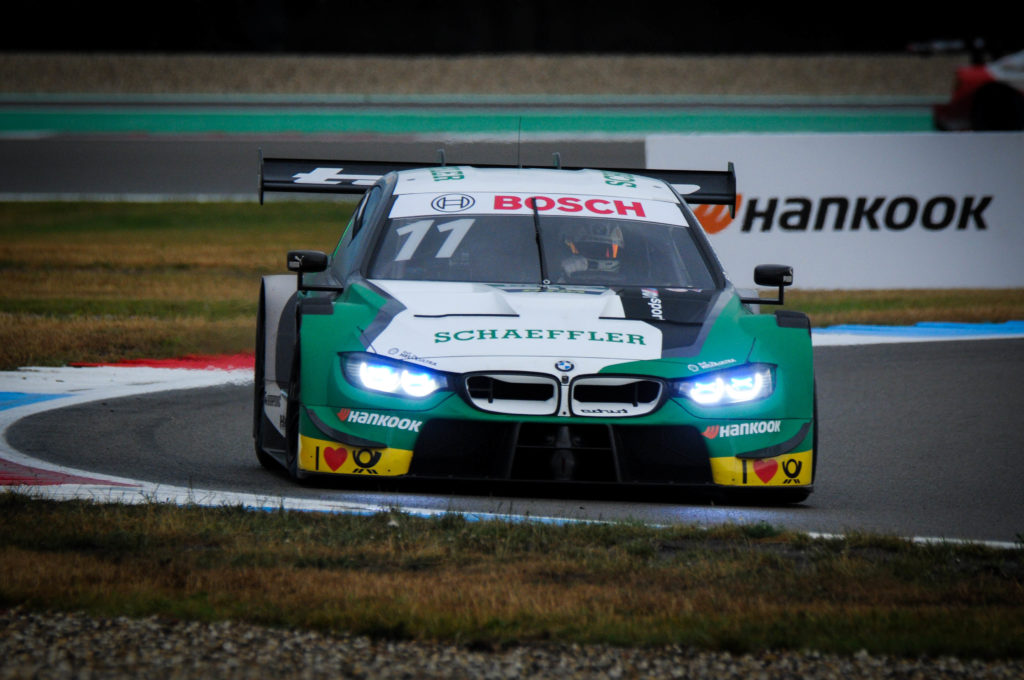 Marco Wittmann (GER) claimed a brilliantly assertive wet-weather victory as the DTM put on a spectacular show at the TT Circuit Assen, the Netherlands’ ‘Cathedral of Speed’.

From pole position, and running the first three laps behind the Safety Car, the BMW driver braved the worst weather conditions to pull a narrow lead over title rival René Rast (GER, Audi). On a similar strategy, the leading pair dropped behind Nico Müller (SUI, Audi), who crept through the field after cleverly gambling on a late stop for fresh rubber in a bid to maximise his pace in the closing laps.

On colder rubber, the Swiss was unable to resist Wittmann’s advances, but, once his tyres were up to temperature, he could build a narrow cushion over Rast, eventually claiming a superb runner-up spot.

The Assen circuit is the fastest track on the DTM calendar, with the infamous ‘Ramshoek’ the quickest corner of the entire season, taken at speeds of 270kph in dry conditions, and with a lateral force of around 3g. Saturday’s showery weather added further spice to the action: the race director electing to begin the race behind the Safety Car for the opening three laps. During the race, the rains slightly abated, meaning a drier line could emerge, but the predicted heavy thunderstorms happily never arrived.

After a disappointing start to his season, Timo Glock (GER, BMW) enjoyed one of the most competitive outings of the year, driving superbly and finishing a strong fifth – despite ploughing through the gravel after an off in the early laps.

“Making a comeback after my difficult home race at the Norisring with pole position and victory here is a super feeling. To earn the maximum number of available points is an outstanding result. Today, I had a mega good car, just sensational. Thanks to the team for that! However, it wasn’t as easy as it seemed. None of the drivers were familiar with such conditions and Audi was strong as well – particularly in the opening stages.” – Marco Wittmann, winner

“Our car was extremely fast. And moving up from sixth to second was really good. So we can be happy and we’ll be attacking again tomorrow. Today, our goal was to make our stop at a late stage, get the set of tyres to the right pressure and keep up the pace. Sadly, we didn’t get the second set to the right temperature quickly enough – I needed another half a lap to try and keep Marco behind.” – Nico Müller, 2nd place

“In cold conditions, we were better than BMW at getting the rain tyres to the right temperature. Still, we were stuck behind Marco, so I wasn’t able to benefit from this slight advantage. Nevertheless, the duel in the opening stages was fun. As the points leader, you can’t afford to start any crazy actions because points are crucial. Therefore, I happily settled for position. For us, third place is a good result to score many valuable points.” – René Rast, 3rd place

With the Saturday race at Assen, the 2019 DTM season has reached its halfway point. Always a welcome occasion to celebrate the ‘half-time champion’. René Rast has a margin of 24 points going into the second half of the season that is already starting tomorrow with qualifying at 10.20 hrs and the second race in Assen at 13.30 hrs. Resting on his laurels wouldn’t be a good advice. After all, last year, there was a driver who started a sensational comeback, making up 15.833 points per race on the eventual champion Gary Paffett (GBR) in the second half of the season. His name? René Rast.

And then, there were …

… Brink & Brink. And a certain Mr Kristensen. The track in Assen is generally known as the ‘Cathedral of Speed’. At the occasion of the maiden DTM race on this hallowed ground, Henk Brink, responsible for sports in the government in the province of Drenthe, 2012 Olympic beach volleyball champion Julius Brink and ‘Mr Le Mans’ himself Tom Kristensen presented the trophies.

And then, there also was …

… die ‘DTM City Demo’ in Assen. There, the DTM and its support series caused a real furore. BMW and Audi brought their race taxis into the centre of the capital of the province of Drenthe. Jens Klingmann and Robin Frijns put on a great show several times. Daniel Juncadella drove the official DTM safety car from Aston Martin. The partner series were out there as well, such as the innovative W Series, exclusively for female drivers, who got really close to the fans. Some 10,000 fans came to the centre of Assen on Thursday prior to the ninth and tenth race of the DTM season and experienced an outstandingly organised kick-off event.

0 0 0 0 0
Previous : Wittmann celebrates third DTM win of the season in the Assen rain – a total of four BMW drivers in the points
Next : Moller holds on for fourth Blancpain GT Sports Club victory at Spa, Earle steps closer to Iron Cup title with class win