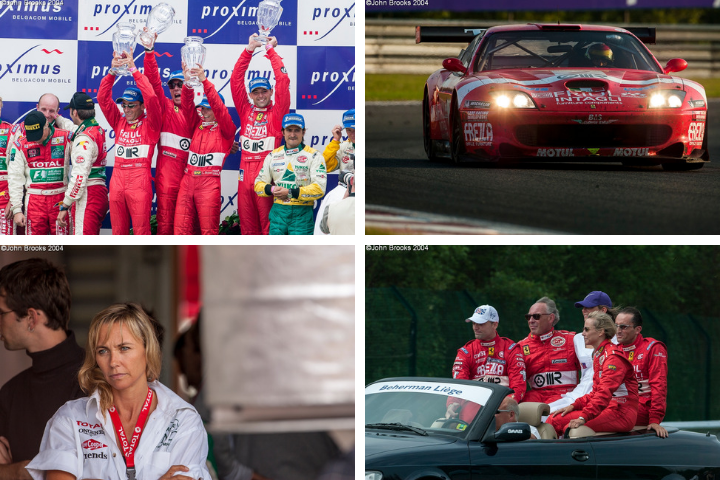 It is 15 years since Lilian Bryner drove a Ferrari into the history books at Spa and 70 years since the Italian brand’s first triumph at the race. Could  those be good omens for the Prancing Horse in 2019?

The 2004 edition of the Spa 24 Hours saw history made as Lilian Bryner became not only the first woman to win the Belgian endurance classic outright, but also the first to win any of the major 24-hour sportscar races.

Bryner had the honour of taking the chequered flag that Sunday afternoon in the BMS Scuderia Italia Ferrari 550 Maranello that she shared to victory with co-drivers Fabrizio Gollin, Luca Cappellari and Enzo Calderari.

The quartet started from the head of the grid thanks to a stunning qualifying lap from Gollin, who scorched around the majestic Spa-Francorchamps track in 2:15.047. Their main opposition was anticipated to come from their sister car, as well as a trio of Ferrari 575GTC Maranellos, while the Vitaphone Racing Saleen S7-R was considered the dark horse of the field.

At the start Uwe Alzen grabbed the lead in the Saleen, but the challenge of the elegant American GT was soon blunted by running out of fuel on-track, putting this challenger out of the race. The battle then settled down to a contest between the two BMS Scuderia Italia 550s and the 575GTC run by GPC Squadra Corse. This latter was directly sanctioned by the Ferrari factory and had an all-star line up behind the wheel, with ex-F1 ace Mika Salo leading Philipp Peter, Fabio Babini and Vincent Vosse.

The race continued to be between this trio until Stefano Livio crashed his 550 at around midnight, the repairs costing the car around 20 laps and any realistic chance of victory. The GPC Ferrari edged away from their remaining BMS rival, with four top professionals pitted against one professional, two gentlemen and one lady in the cockpit making the difference.

As the race continued the advantage of the 575 stretched out to a lap and a half when the racing gods intervened with just under six hours to go. The rear diffuser broke on the leading Ferrari, causing serious handling problems that even the professionals could not drive around. A long stop was the answer, costing the 575 its lead and granting a similar advantage to the 550.

Gollin in the BMS Ferrari was consistently quicker than anyone on the track, and with the prospect of victory in sight his team-mates all stepped up their game. Bryner, Cappellari and Calderari all put in great stints in the final quarter of the race to gradually increase the advantage over the progressively hobbled 575. It was following the classic recipe for success in long-distance racing: be consistent and spend as little time in the pits as possible.

The clock ticked on and with 50 minutes remaining the leading car had its front brake pads changed as a precautionary measure. Then Bryner climbed aboard, fired up the V12 and headed for the record books. She crossed the line with a lap in hand over the 575 crew. To underline the furious pace of a race held in hot, dry conditions, the crew of the #2 Ferrari had covered 558 laps, which established a distance record on the modern Spa-Francorchamps track, 30 laps better than the previous best.

A delighted Bryner had this to say after the race.“It is a Swiss National day today and it is certainly a special day. I want to thank all my fellow drivers as they did a wonderful job throughout the 24 Hours and the team also as they were all splendid.”

Bryner was not the only woman to step up on to the podium at the 2004 Spa 24 Hours: the G3 class ceremony featured Vanina Ickx as part of the Mühlner Motorsport Porsche 911 GT3 crew that took victory. She was joined in the celebrations by Sylvie Delcour, who helped steer the EBRT Lotus Elise to third spot.

Ickx was proud and pleased to have followed in her legendary father’s footsteps at Spa. “I really enjoyed the race. It’s always something special to be on the podium. In endurance racing, it’s not one person’s job but it’s the teamwork that counts, and Mühlner Motorsport has really been doing very well! There were two girls on podium in G3, and with Lilian Bryner in GT, this is a really big day for women in motorsport.”

It was the third overall victory for Ferrari in the Spa 24 Hours following on from 1949 and 1953.

This year, Ferrari will launch a bolstered effort at the Total 24 Hours of Spa thanks to three Pro entries. The brand is also popular across the classes with three cars each in Pro-Am and the Am Cup, plus a further Silver Cup contender. Will the 70th anniversary of that first win bring further success to the Prancing Horse?