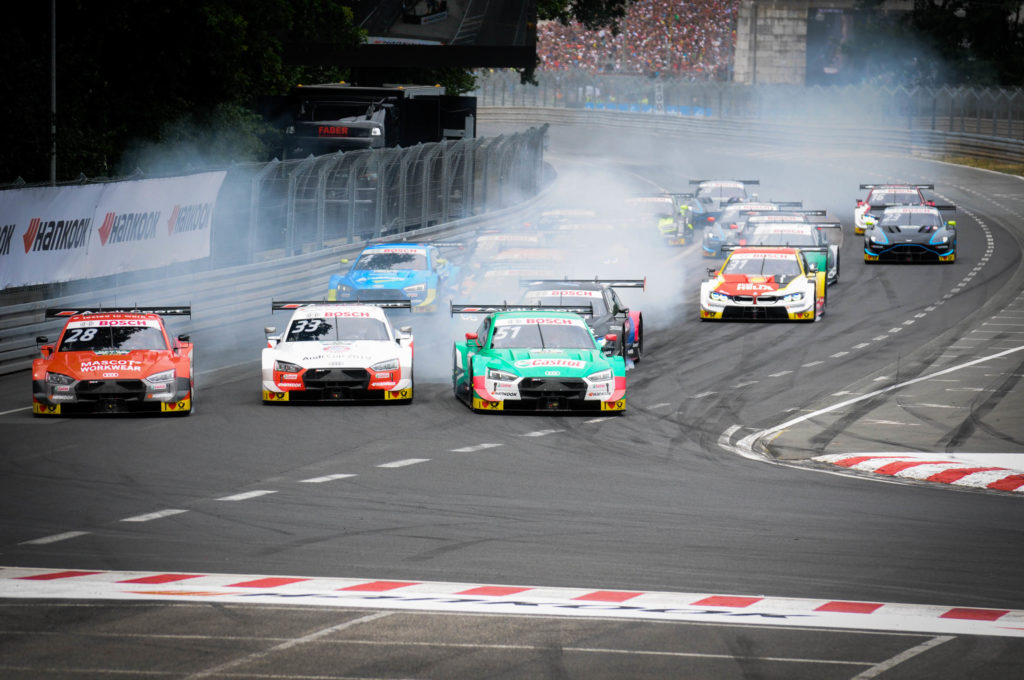 A dominant victory on Saturday, a double podium on Sunday, a new track record and the lead extended in all three DTM classifications: Audi managed to deliver its so far strongest performance in its home round at the Norisring.

In the past, the 2.3 kilometer city street circuit between the Dutzendteich Lake and the Max Morlock Stadium proved to be a difficult track for the brand with the four rings at most events. This has changed with the new Audi RS 5 DTM: The Class 1 race car with more than 610 horsepower broke all records in its first deployment at the Norisring. Audi was in front in both free practice sessions, clinched pole position on both days, four of six possible podium finishes and the largest number of points. In addition, the new turbo race car set new track records in qualifying (René Rast) and in the race (Nico Müller).

In Sunday’s race, all six factory-fielded Audi RS 5 DTM cars finished in the top eight and thus in the points. Just four weeks after his appendix surgery, four-time Norisring winner Jamie Green celebrated a successful comeback as the runner-up. “Unfortunately, I had to let Philipp Eng pass again after slight contact,” said the Briton from Audi Sport Team Rosberg. “As a result, I lost a lot of time and fell behind the subsequent winner, Bruno Spengler. Even so, it was a good race for me.”

Mike Rockenfeller from Audi Sport Team Phoenix fought back from eleventh on the grid to third place. For the 2013 DTM Champion, this marked the first DTM podium at the Norisring. “It’s cool to stand on the rostrum here,” “Rocky” said after the podium ceremony performed by Prince Albert of Monaco, the Bavarian Minister President Markus Söder and ski star Thomas Dreßen. “My car was really good. I was able to overtake many opponents and had a lot of fun in the race. After struggling here most of the time in the past, all of us at Audi can be very proud of this outcome. We were extremely strong this weekend.”

René Rast and Nico Müller had to settle for positions seven and eight on Sunday although both had started the race from the front row. The two Audi drivers had unfortunate contact with each other on the first lap. Due to the resulting spin, Rast dropped to the last position and Müller was handed a drive-through penalty.

“We gave away victory today, but it was a really strong team performance,” said Bram Schot. The Chairman of the Management Board of AUDI AG watched Sunday’s race together with his fellow board members Hans-Joachim Rothenpieler (Technical Development) and Peter Kössler (Production and Logistics) at the Audi garage in the pit lane. On Saturday, Hildegard Wortmann, the new Member of the Management Board for Sales and Marketing, had kept her fingers crossed for the Audi team at the Norisring.

“After clinching the top three spots on the grid in qualifying, it goes without saying that we also wanted to win today,” said Head of Audi Motorsport Dieter Gass. “Following a good start, we unfortunately didn’t get things right in turn one, which caused the lead to pass to Bruno Spengler. René and Nico fought back with strong lap times, so that we finished in positions two, three, four, six, seven and eight. We can be very happy with our altogether strong showing at the Norisring and are already looking forward to the DTM’s premiere at Assen in two weeks’ time.”

0 0 0 0 0
Previous : Last gasp pass sees Absolute’s Tan and Rump claim Audi’s first victory of the season at Fuji
Next : High Five: Spengler is the record winner at the Norisring