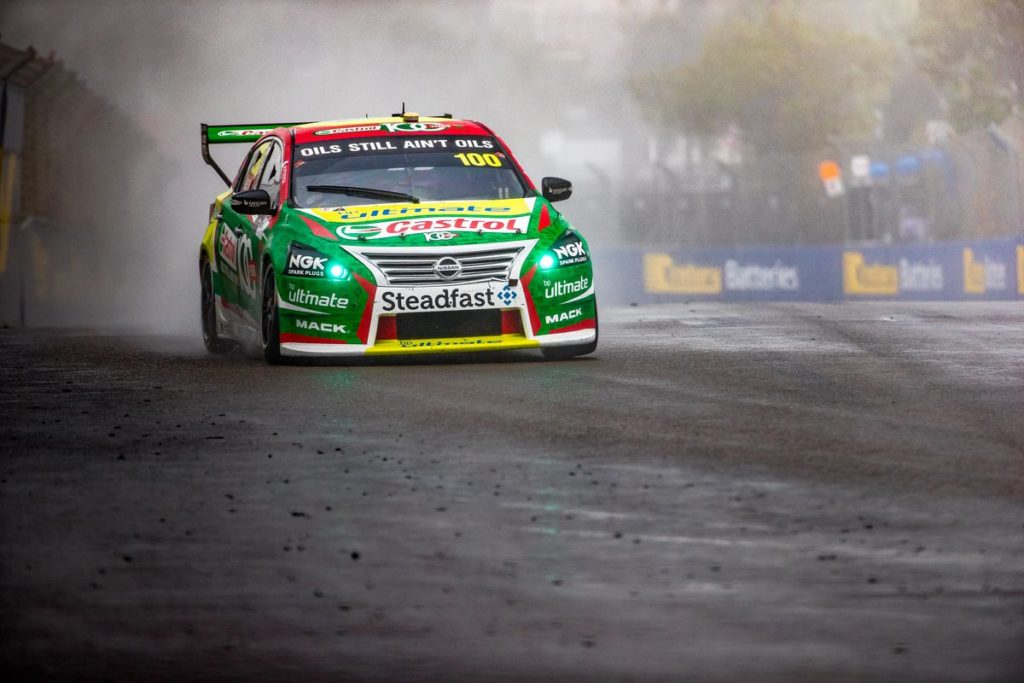 Rick Kelly drove through the field in today’s 200km Townsville race to finish sixth in treacherous conditions. Rain played a big factor in this afternoon’s action-packed race and the wet conditions played to the #100 Castrol car’s strengths, particularly in the latter half of the race.

Early on Rick found himself slipping down the order with the car lacking grip on slick tyres on the damp circuit. Fortunately the rain really came down and the team was able to whack on a set of wets which transformed the car and allowed Rick make several overtakes and comfortably finish in the top ten.

Simona De Silvestro also enjoyed the wet conditions in the #78 Team Harvey Norman entry, finishing tenth despite contact with Slade late in the race and a small pitstop mishap.

It wasn’t André’s day in the #7 Plus Fitness Racing car. Despite a positive qualifying, the race didn’t go to plan after Frosty spun André at the same corner where he received contact during Saturday’s race. Damage to the front guard was causing tyre rubbing and repairs in the first pit stop meant valuable time was lost.

Garry Jacobson wasn’t able to complete the race in the #3 Rabble.club Racing car with an engine failure putting an end to his day with around ten laps remaining in the race. Garry was running in the top ten for the majority of the race; a fantastic effort by the rookie driver.

Rick Kelly, #100 Castrol Racing : “It was a really eventful race for us, we got pummelled a couple of times when the track was quite slippery just by getting dive-bombed by some drivers and solid moves, there was no bad driving in any of it, I just get held wide on the slippery line and four or five cars got past and we went from a solid spot to almost dead last so that was a little bit frustrating because often when that happens you can’t recover. Thankfully it really rained and we put wets on and we were able to drive the car back up into sixth. So I’m pretty stoked for the team to grab that, it’s not a win but we need to be very happy to take that result given the really tough year that we’ve had particularly on our side of the garage.”

Simona De Silvestro, #78 Team Harvey Norman : “I was pretty happy that it started raining because usually I do pretty well in these conditions and it puts everything on a level playing field so I was pretty excited and we had really good pace. To be honest I can’t believe we finished tenth because we had a lot of calls that were not ideal like we had to double stack in the first stop and then we were going to double stack the second stop but didn’t which in hindsight was good then the third stop we got a really late call and I missed the pit lane and lost a couple of seconds, then got hit by Slade later in the race. It was pretty crazy out there, I’m happy with tenth, but it could have been even better, we were right where Rick was so maybe we could have been one or two positions higher.”

André Heimgartner, #7 Plus Fitness Racing : “It was pretty disappointing to get taken out by Frosty after we had pretty good pace early in the race, especially because it was the same corner where I had contact yesterday. It’s a bit annoying because once again we had to spend a bit longer in the pits to repair the front of the car where the bumper was rubbing on the tyre. I think if it had of stayed dry it might have been a different story because our car was quite quick in the dry but it wasn’t meant to be.”

Garry Jacobson, #3 Rabble.club Racing : “I think in terms of personal performance I did a good job and handled the conditions well, I kept getting good starts with the safety car restarts and the start of the race itself and I was able to stay out of trouble. The rain seems to help me be a bit more competitive with the current package that we have so every time it rains there’s a big smile on my face so I felt pretty quick throughout the race until we started losing engine power. I was trying my best to manage it for about ten laps but lost a couple of places because it was hard to drive the car through the corner particularly at low RPM. Eventually we had an engine failure but at the end of the day this was no fault of myself or the team, these things happen, we’ll just have to look into it back at the factory to see what caused it. I’m still positive to be honest, to be running comfortably in the top ten, I think we were sixth for a little bit so that was cool and good experience for me. Would have been nice to finish top ten but wasn’t meant to be.”

0 0 0 0 0
Previous : Eriksson on the podium for BMW at the Norisring – Four BMW M4 DTMs in the points
Next : Four in a row for Bohemia Energy racing with Scuderia Praha at 24H Portimao