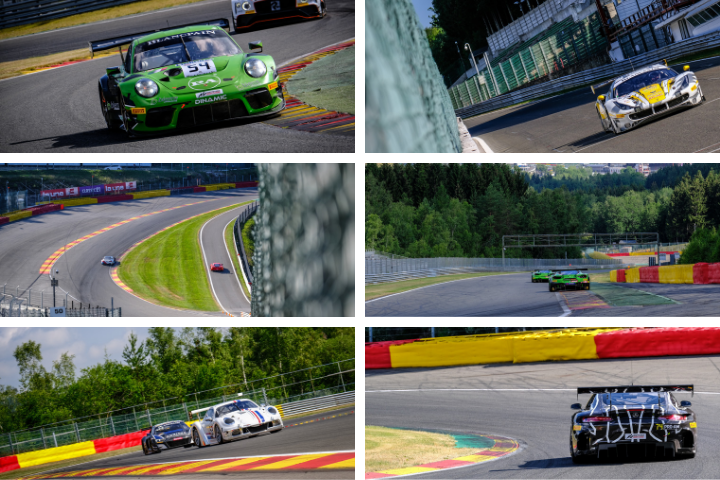 More than 60 cars were present on Tuesday and Wednesday for 16 hours of running, which formed part of an expanded schedule for the official test. It comes with less than three weeks remaining before practice begins for the 71st edition of the twice-around-the-clock race, which will once again act as the marquee event for both the Blancpain GT Series and the Intercontinental GT Challenge Powered by Pirelli.

The test kicked off with a three-hour session on Tuesday morning, after which the final entry list was revealed for this year’s Total 24 Hours of Spa. A record-breaking 72 cars are set to contest the 25-28 July event, while the Intercontinental GT Challenge also sets a new benchmark with 28 nominated entrants.

SMP Racing emerged with the fastest time on Tuesday, with its #72 Ferrari 488 GT3 posting a lap of 2m19.127s during the five-hour afternoon session. This edged out the best effort from the morning, a 2m19.257s set by the #117 KUS Team 75 Bernhard Porsche 911 GT3 R, which remained second on the overall charts at the end of the day.

The fastest time of the test was set on Wednesday morning and it was another Porsche that showed impressive pace. The #54 Dinamic Motorsport car took top honours, with its best effort of 2m18.833s proving to be the outright benchmark. Bentley Team M-Sport hit the front during the afternoon run as the #107 Continental GT3 led the way with a time of 2m19.316s, ensuring the British marque a strong start as it bids for Total 24 Hours of Spa glory in its centenary year.

The test also saw an unexpected arrival on Tuesday morning when a familiar-looking Volkswagen Beetle took to the track along with the GT3 cars that were contesting the opening session. Carrying #53, the Beetle managed to complete two full laps of the 7km circuit before returning to the pits.

It was all part of a project that will see “Juliet” join this year’s Total 24 Hours of Spa as an invitational entrant. The car that will take the start on 27 July is in fact a modified Porsche 911 GT3 Cup MR and will celebrate the 50th anniversary of the first Herbiefilm, which was released in 1969.

The programme came together thanks to the work of Michel Deman, a local specialist in exceptional cars, and former racer Pascal Witmeur, who has a reputation for launching similarly ambitious projects at the 24 Hours. The car will raise funds to support the VivaCité (RTBF) “Viva for Life” project and “Kinderarmoedefonds.be”.

With the test days complete, the countdown to race week has now begun. This will begin on Monday 22 July when a unique track day will take place on the iconic Spa-Francorchamps circuit. Organised in collaboration with three-time Total 24 Hours of Spa winner Marc Duez, it will give members of the public the chance to drive their own car on the world’s greatest layout.

This will be followed on Tuesday by the first official practice session, the Bronze Test, after which attention moves off the circuit for Wednesday’s parade to Spa town centre and a full-field driver autograph session. Track action resumes on Thursday 25 with practice and qualifying taking place, followed on Friday by the decisive Super Pole contest.

The event will reach a crescendo on Saturday 27 July as the Total 24 Hours of Spa begins its 71st running at 16.30. This year’s event also features a number of high-level support series, including the new and improved Formula Renault Eurocup, Lamborghini Super Trofeo, and an impressive 50-car field for Championnat de France FFSA GT. What’s more, the new GT2 concept will launch with a one-make race at Spa for a full field of Porsche GT2 911 RS Clubsport machines.

Teams now have just a few weeks to analyse their findings from the test before returning to the circuit for the main event. With preparations reaching their final phase, the latest running of the world’s most competitive GT race is just around the corner.

0 0 0 0 0
Previous : WRC – Paddon to fly with Fiesta in Finland
Next : Supercar – André Heimgartner has strong race finish in Townsville