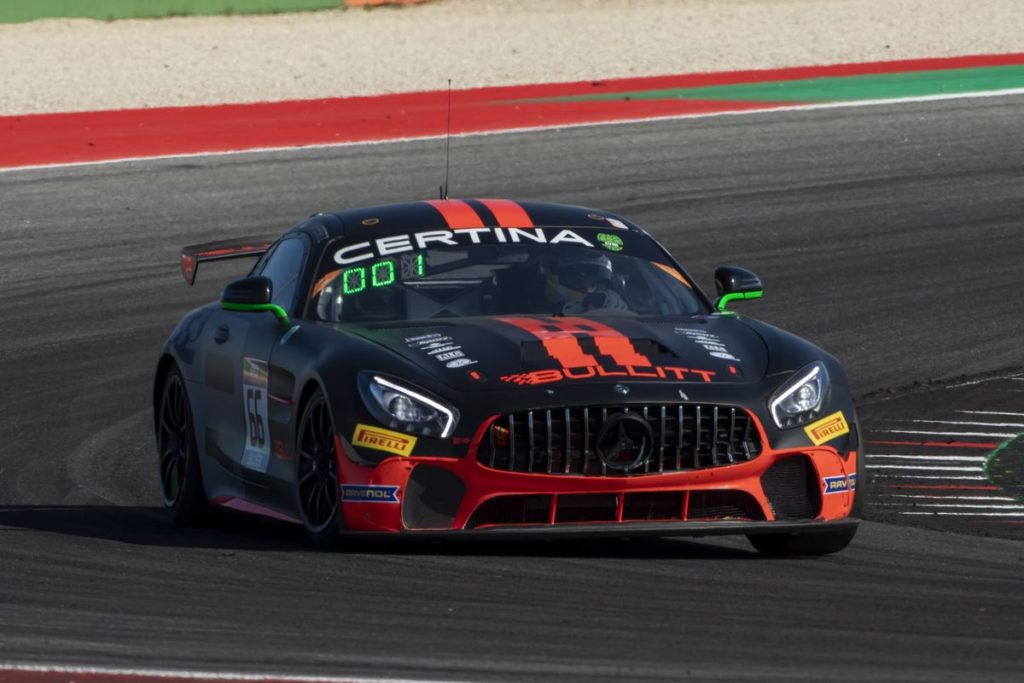 Bullitt Racing has won the first race of the GT4 European Series weekend at the Misano World Circuit with its #66 Mercedes-AMG GT4. Romain Monti and Alex Lambertz won on their debut with the Spanish team in today’s race. RN Vision STS was victorious in the Pro-Am class, with Selleslagh Racing Team clinching the Am class win at the Italian circuit.

The race got underway with Mads Siljehaug leading Patric Niederhauser into the first corner, followed by Euan McKay in the #8 Ekris and Benjamin Lessennes in the #14 Equipe Verschuur McLaren.

In the opening laps, the two KTM drivers carved out a five second lead, before being told they would have to come in to serve a drive through for not maintaining the starting speed. At the end of the ninth lap, both True Racing KTMs served their penalty, which allowed Euan McKay to take the lead.

On the next lap, however, the #8 Ekris suddenly slowed down and Stéphane Lémeret in the #9 CMR Alpine inherited the lead, followed by Romain Monti in the #66 Bullitt Racing Mercedes. The two drivers battled for the lead, with the Belgian driver keeping the Mercedes behind, until he suffered a left front puncture.

Monti then stayed out until the very end of the pit window, before handing over to teammate Alex Lambertz. Lambertz returned to the track with a nine second lead over Daniel McKay (Equipe Verschuur) and Alec Udell (MDM Motorsport). Right behind them, Gabriele Piana (RN Vision STS), Jan Kisiel (Leipert Motorsport) and Ricardo van der Ende (Ekris Motorsport).

Up front, Lambertz continued to lead, as McKay dropped down the order and behind the groups fighting for second and fourth positions. Piana eventually passed Udell to take second overall, but the gap to the race leading Bullitt Racing Mercedes was unbridgeable by that time.

After 33 laps and just 0.069 after the one-hour mark, Lambertz crossed the line to secure Bullitt Racing’s first win of the 2019 season, on his and teammate’s Monti debut race with the Spanish team. Gabriele Piana finished second on the road, ahead of the second-placed Silver Cup entry of Alec Udell. Jan Kisiel took third place in the Silver Cup in the #4 Mercedes he shares with Max Koebolt.

Gabriele Piana and Marius Zug stayed out of trouble, to claim their second class win of their 2019 GT4 European Series campaign. Piana finished the race in second place overall, well clear of the #12 Borusan Otomotiv Motorsport BMW of Ibrahim Okyay and Cem Bolukbasi, who claimed the first ever podium finish in the GT4 European Series for the Turkish team.

Marc Basseng and Phillip Bethke also secured their first podium of the 2019 season, after Basseng moved the #13 Schwede Motorsport Mercedes into the top three in the second part of the race. The German duo were the first of six Mercedes entries in the Pro-Am top 10. Jonathan Cecotto and Alessandro Giovanelli (Selleslagh Racing Team) finished fourth on their return to the series, ahead of Pro-Am points leaders Marcus Paverud and Luci Trefz (Leipert Motorsport).

A penalty for the #777 Schwede Motorsport Mercedes meant it dropped to sixth in class, after being third in class at one point during the race, with the #35 Rédélé Competition Alpine and #33 Bullitt Racing Mercedes completing the Pro-Am top eight.

Jean-Luc Behets and Johan Vannerum (Selleslagh Racing Team) claimed their third win of the season at Misano. The Belgian duo made it three from three in Italy, having won both races at the opening round of the season at Monza. Clement Seyler and Pascal Bachmann took second place to extend their Am class points lead, while Las Moras by Equipe Verschuur’s Liesette Braams and Gaby Uljee claimed the third podium step.

Alex Lambertz, #66 Bullitt Racing Mercedes-AMG GT4: “For me it was just 25 minutes, but they felt really long. All in all, the car was good. I managed to keep the distance to the second car the same. It was the first race for me in the AMG, the first race in the series and the first race with the team and Romain, it was a good one!”

Gabriele Piana, #111 RN Vision STS BMW M4 GT4: “From the moment I overtook the BMW, it was smooth sailing. I kept pushing, but not too much. It was quite a comfortable race and I could see that I was getting closer to the leader, but this wasn’t my goal. I was just waiting for the race to finish. I’m happy. We win, so it’s fine!”

Marius Zug, #111 RN Vision STS BMW M4 GT4: “We tried to keep it clean and not race any Silver cars, but just focus on our class. We struggled in the previous races with penalties and crashes. But this time we kept it clean and it went perfectly.”

Johan Vannerum, #32 Selleslagh Racing Team Mercedes-AMG GT4: “Things went really well. Had a great start and a long battle with the sister car of Guillaume Dumarey. I managed to bring it in on P1 and after that Jean-Luc did the same and we won it!”

Jean-Luc Behets, #32 Selleslagh Racing Team Mercedes-AMG GT4: “Johan had a great first stint and I was able to do my stint without taking any risks. We tried to gain as many positions in the overall standings. Tomorrow, we hope to do the same!”