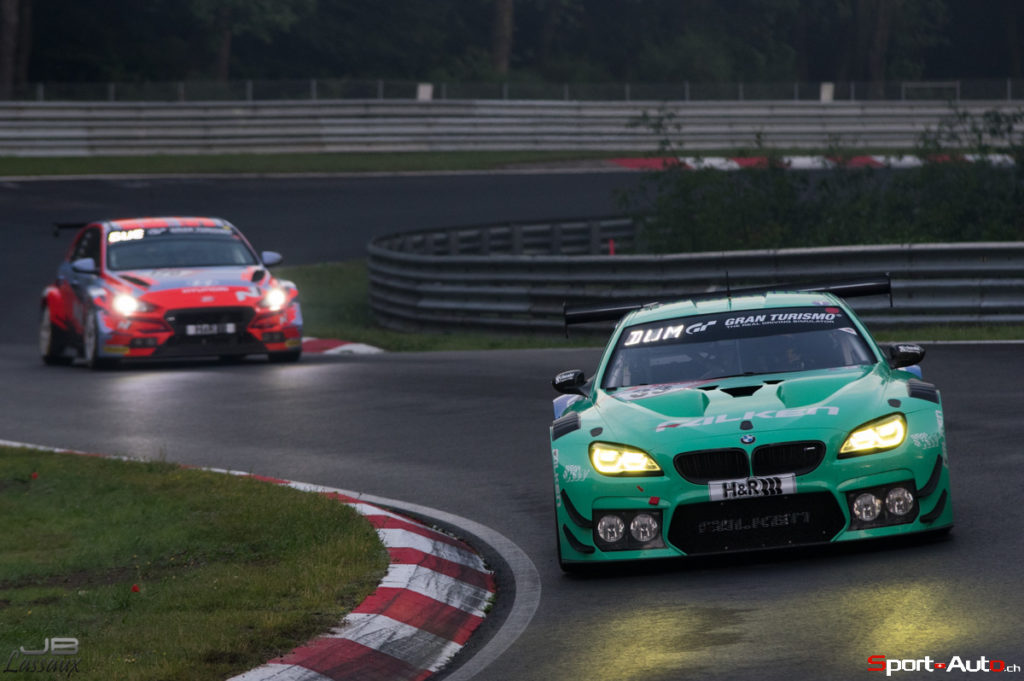 The #33 car was the only BMW M6 GT3 in the top category, the SP9 class, to see the chequered flag at the endurance classic in the Eifel region of Germany. By nightfall, both ROWE Racing cars, the BMW Team Schnitzer BMW M6 GT3 and the #101 Walkenhorst Motorsport car were all out of the race as a result of crashes. The second Walkenhorst car then also crashed in the night, forcing it to retire.

Quotes from the Nürburgring 24 Hours:

Jens Marquardt (BMW Group Motorsport Director):  “Our teams had been looking forward to the Nürburgring 24 Hours for months. With 230,000 spectators, it provided a unique stage for the highlight of the GT season. We came to the Eifel track very well prepared – which makes this overall result in the SP9 class all the harder to take. I am pleased for FALKEN Motorsports, who managed to finish sixth overall with their BMW M6 GT3. However, the race came to a premature end for the other five BMW M6 GT3s. The fact is that you only have a chance here in the Green Hell if you get through the race without making any mistakes. We did not manage that. We have shown more than once recently that we are capable of winning a 24-hour race – whether at Spa-Francorchamps or Daytona. We lost this time in the top category on the Nordschleife. Despite this, we are still 100 percent behind this event. We had well over 40 cars in action. For us, it was once again a fantastic festival of customer racing. The competitiveness of our customer teams in classes like SP10 with the BMW M4 GT4, in which we finished second, was confirmation of our commitment to customer racing. I would like to congratulate all the teams for that. As far as the battle for overall victory is concerned, I have just one thing to say: We will come back stronger. Congratulations to Audi on their overall victory.”

Jens Klingmann (#33 BMW M6 GT3, FALKEN Motorsports, 6th place): “We drove a clean race and didn’t make any mistakes. Our speed was consistent but unfortunately it wasn’t enough to move up through the field. However, when you consider that we had to start from 31st place, we managed to improve significantly with a nearly ideal race. Taking our situation into account, we can be pleased with sixth place, even though we had hoped for better results from BMW’s point of view.”

Timo Scheider (#42 BMW M6 GT3, BMW Team Schnitzer, DNF): “I feel sorry for BMW and BMW Team Schnitzer. My crash was very unlucky. I had been behind the Hyundai for several corners and was able to pull past him in Brünnchen. Unfortunately, he didn’t see me and hit me.”

Jesse Krohn (#99 BMW M6 GT3, ROWE Racing, DNF): “When I exited the pit lane I had a Porsche in front of me who was travelling slowly. I pulled up next to him and wanted to overtake him. In turn one, I drove as close to the inside as possible, but he cut in and there was contact. It is a great shame that this incident brought our race to an end.”

Philipp Eng (#98 BMW M6 GT3, ROWE Racing, DNF): “That was a frustrating 24-hour race. We only managed three and a half hours of it out on the track. However, that kind of thing happens, particularly on the Nordschleife. When I was in the car, it felt good and we were running in the top five.”