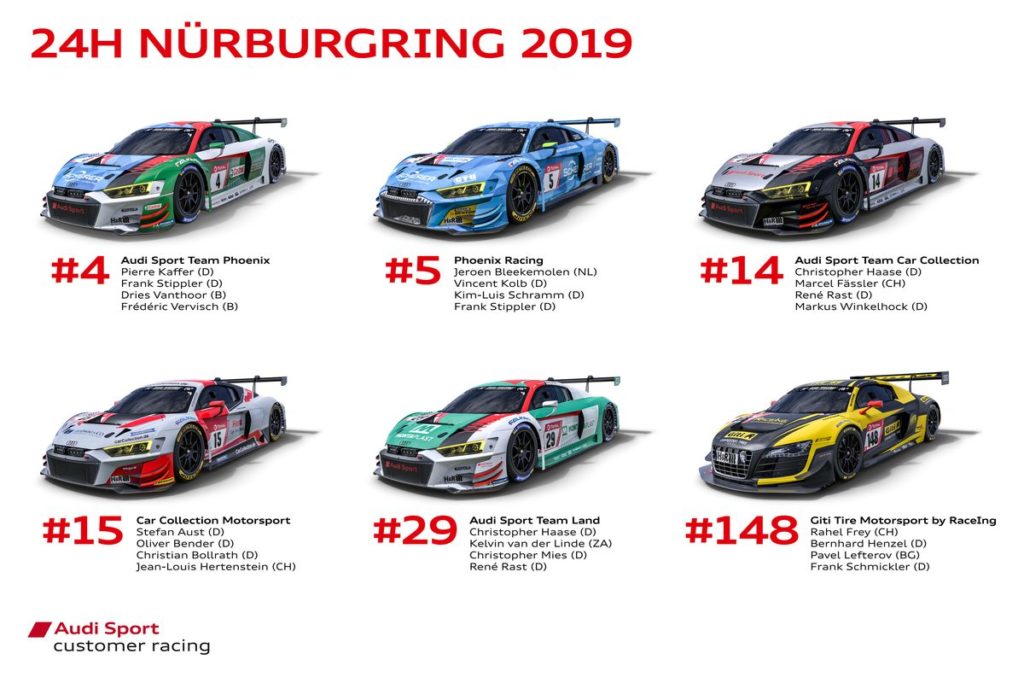 For Audi Sport customer racing, the entire racing event revolving around the Nürburgring 24 Hours again marks a weekend of superlatives this year: From June 20 to 23, seven teams will be competing with a total of ten customer race cars from Audi that represent the entire breadth of the current model range. In two other racing series, far more than a dozen race drivers are relying on Audi as well. At the huge public event in the Eifel, the brand is going to offer to fans an even more attractive program on the Audi Sport Campus this year.

The crowd can look forward to a superb weekend both on and off the track: From the drivers presentation to expert talks, pit lane and paddock tours, autograph sessions, the Audi Sport Seyffarth R8 LMS Cup and an E-Race-Challenge, the Audi Sport Campus will feature a great variety of attractions. A video wall, food trucks, a chill-out area and evening sundowner sessions with a DJ invite visitors to spend time on the campus. “The major event of the whole year is coming up for our brand,” says Chris Reinke, Head of Audi Sport customer racing. “We want to celebrate this together with our fans like never before. In the competitive context, we’re expecting extremely thrilling races in which a total of more than two dozen of our race cars will be seen in sprint and endurance racing events. For the 24-hour race, our aim is to score our fifth victory.”

Since 2009 the Audi R8 LMS has been tackling this fierce competition. The GT3 sports car has clinched overall victory four times. In 2012 and 2014, Audi Sport Team Phoenix finished in front, in 2015, Audi Sport Team WRT did and in 2017, Audi Sport Team Land. Audi Sport is supporting the Phoenix and Land teams this year, plus, for the first time, Team Car Collection that won the Dubai 24 Hours in January. Half a year ago, the evolution of the Audi R8 LMS delivered a brilliant endurance racing debut at the event. Two private Audi R8 LMS cars from Phoenix Racing and Car Collection complement the GT3 field at the Nürburgring. One first-generation Audi R8 LMS from the Giti Tire Motorsport by RaceIng team will race in the SP 8 class. Two Audi R8 LMS GT4 and two Audi RS 3 LMS cars battling for class victories complete the lineup of the customer teams.

Eight male and one female driver from Audi Sport will compete in the GT cockpits, plus Audi factory driver René Rast from the DTM and three-time Le Mans winner Marcel Fässler. Rast, Christopher Haase, Kelvin van der Linde, Christopher Mies, Frank Stippler and Markus Winkelhock have a combined track record of ten overall victories at the 24-hour race in the Eifel. Jeroen Bleekemolen, in Team Phoenix standing in for Jamie Green who has fallen ill, has also won the race once before.

In addition to the endurance race, spectators can look forward to five sprint competitions. The WTCR – FIA World Touring Car Cup will celebrate the midpoint of its season in the Eifel, on the fifth of ten race weekends. Aside from Comtoyou Team Audi Sport with Niels Langeveld and Frédéric Vervisch, and Leopard Racing Team Audi Sport with Jean-Karl Vernay and Gordon Shedden, a guest entrant is relying on Audi too: privateer driver Antti Buri from Finland will be at the wheel of an Audi RS 3 LMS as well. The WTCR is contesting three races on the Nordschleife. The Audi Sport Seyffarth R8 LMS Cup completes the family of the four rings. In two rounds on the Grand Prix circuit, its drivers will be pitted against each other in identical Audi R8 LMS GT4 cars. While television channel RTL Nitro will continuously air live coverage of the 24-hour race the FIA WTCR can be watched on Eurosport and the Audi Sport Seyffarth R8 LMS Cup on a live stream at www.sport1.de.

The Audi Sport customer racing teams in the 24-hour race

0 0 0 0 0
Previous : Mercedes-AMG with on- and off-track racing spirit for the season highlight
Next : TOYOTA GAZOO Racing Takes on the Challenge of 24 Hours of Nürburgring Endurance Race with New GR Supra and Second-Year LEXUS LC