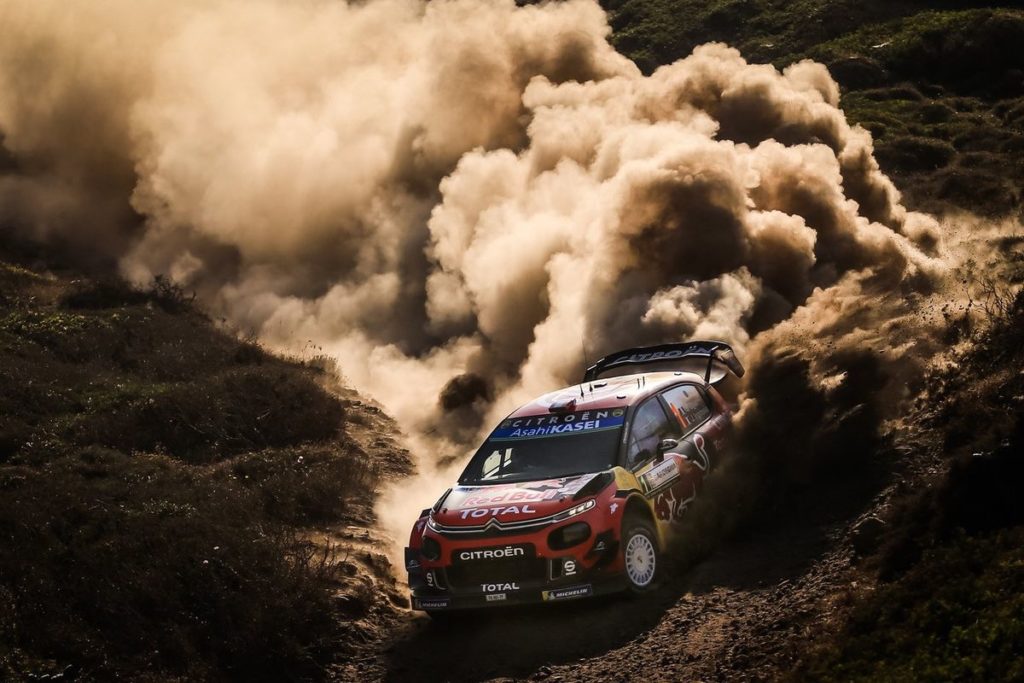 Although Citroën Total World Rally Team’s chances of a good overall result were compromised on day one, Sébastien Ogier and Julien Ingrassia confirmed once again that they remain fierce competitors on the Power Stage, grabbing the second fastest time and four bonus points. Meanwhile, Esapekka Lappi and Janne Ferm made it to the finish in seventh overall, having managed the last two legs admirably.

After making a mistake on day one (SS5) as they attempted to minimise the major disadvantage of running first on Sardinia’s technical and very loose gravel roads, Sébastien Ogier and Julien Ingrassia – having rejoined under Rally 2 rules on Saturday’s leg – were solely focused on attempting to grab a few bonus points on the Sassari – Argentiera Power Stage during today’s short final leg (41.90km). Once again showing their incredible fighting spirit, the French six-time world champions claimed four points, which means they now lie second in the world championship standings, four points behind the new leader.

Whilst it falls short of Citroën Total World Rally Team’s hopes for this round, the result means that when the championship resumes after the summer break, they will tackle roads in Finland (1-4 August) that have already been cleaned by a competitor. The forthcoming break will undoubtedly be used by the Red Army to redouble its efforts in preparation for the second half of the season.

On gravel, the first leg tends to be decisive because it determines the running order for the rest of the rally, and Esapekka Lappi and Janne Ferm unfortunately experienced this first hand. They were running in sixth overall and were gradually getting their bearings when they dropped almost 40s when one of their tyres came loose (SS4). They put in a lot of hard work in the C3 WRC to move back up the leaderboard (stage win on SS5, second on SS9, just 0.1s off the pace), but were unable to finish the opening leg any higher than eighth, after also suffering a sensor issue (SS6). In spite of a less than ideal position in the running order on Saturday, they managed to produce a consistent, error-free performance on day two, as they continued to get to grips with the C3 WRC on gravel and regained seventh position when one of the other crews suffered a puncture. They ended the final leg in the same place. This race, which they managed intelligently once they were no longer able to fully express themselves, will undoubtedly help them to begin the next event, their home round in Finland, in the best possible shape.

“Sometimes in motorsport, you have a weekend where  things just don’t go your way and this weekend was clearly one of those. We’ll put it behind us and focus on the future. In running first on the road, the best we could have realistically hoped for would have been to finish around fifth, so my mistakes cost us a few points. But it is still incredibly close in the championship, even though I’m not the kind of person to take any pleasure from the misfortune of others, especially when it’s Ott.I’m now going to have a holiday and recharge my batteries. We’ll be back in Finland and try to do a lot better.” “Obviously, it wasn’t quite the result that we were hoping for. The problems we had on the first leg went a long way to determining the rest of our weekend. We weren’t able to perform at our true level given our position in the running order. It was pretty much impossible to make up ground on these roads, where the grip increases so much with each passing car. We also weren’t helped by making the wrong call on tyres on Saturday morning. But at least we made it to the finish. We’ll now get back to work so that we’re in better form for our home round in Finland.”

What is your analysis of this weekend’s race in Sardinia?

Obviously, this isn’t the result we were hoping for, although we knew that running first on the road here, where the roads clean so much, Sébastien and Julien were bound to have their work cut out. We certainly can’t blame them for their mistakes, because such errors are so highly uncharacteristic. And they did a great job on the Power Stage, showing their incredible fighting spirit once again. Esapekka and Janne had a slightly disappointing first half of day one and unfortunately, this had a knock-on effect on the rest of their weekend, forcing them to carve out the racing line for the rest of the field. In Sardinia, it’s a disadvantage that is almost impossible to overcome. However, they managed to cope intelligently with the frustration involved, getting more miles under their belt in the C3 WRC and making it to the finish. They will now look get their season back on track in Finland, where we know they definitely have the potential to do very well.

With the championship so tight, it looks like the summer break may be more work than play…

Yes, Sébastien and Julien’s never say die attitude, combined with the dramatic end to the rally, means that the championship remains wide open. It doesn’t change the way in which we approach our WRC campaign at all, however. We are going to continue to deploy all our forces in the battle! We’re testing next week and one thing’s for sure, we will be redoubling our efforts to try and provide our drivers with the best weapons possible for the second half of the season.

THE HIGHLIGHT OF THE WEEKEND

Described by many observers as being more suited to a cross-country rally given the roughness of the road, the Sassari – Argentiera Power Stage (6.89km) once again saw Sébastien Ogier and Julien Ingrassia produce another majestic performance, despite being the first WRC crew to contest the stage.

Sébastien Ogier had predicted that the Power Stage would be very tough, given the extent to which the rough, gravel roads clean and provide more grip to those further down the running order. On these sorts of sandy roads, where ruts can form quickly, the ability to take risks could make all the difference. Sébastien and Julien produced an extremely committed performance, clearly shown in the utter concentration displayed on their faces in the on-board camera footage. Their driving, usually so clean and tidy, was extraordinarily aggressive, but their approach paid dividends at the finish! Only Andreas Mikkelsen, who started five places further down the running order, managed to go faster by just over two seconds. These hard-fought four points may yet prove decisive at the end of the season…

* Subject to publication of the standings by the FIA

* Subject to publication of the standings by the FIA