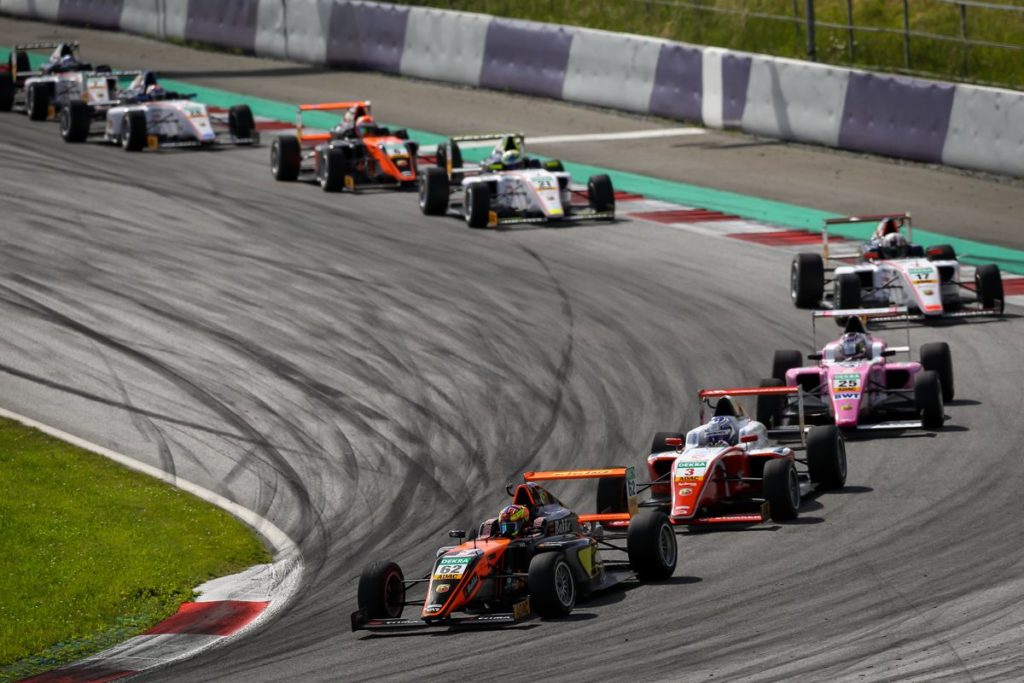 Paul Aron (15, Estonia, Prema Powerteam) claimed a maiden ADAC Formula 4 victory in the third of three races at the Red Bull Ring. In an exciting contest, the Prema driver prevailed over ADAC Sports Foundation protégé Niklas Krütten (16, Germany, Van Amersfoort Racing) and Théo Pourchaire (15, France, US Racing CHRS). Krütten and Pourchaire, who had temporarily taken an overall championship lead with his win in the morning, are now tied at the top of the table.

Pourchaire was only declared the winner of the first race of the day after a retrospective penalty was imposed on Red Bull Junior Dennis Hauger (16, Norway, Van Amersfoort Racing). The decision promoted the French youngster from second to first place and handed him a first ever ADAC Formula 4 win. William Alatalo (17, Finland, ADAC Berlin-Brandenburg e.V.) and Pourchaire’s team-mate Arthur Leclerc (18, Monaco, US Racing CHRS), brother of Formula 1 shooting star Charles Leclerc, also moved up one place to second and third respectively.

In optimum weather conditions, Krütten made a good start to the afternoon race, and a leading trio that also included Giorgio Carrara (18, Argentina, Jenzer Motorsport) and Gianluca Petecof (16, Brazil, Prema Powerteam) soon pulled away from the main bunch. But this three-way fight came to a sudden end when Petecof and Carrara collided and spun off track on the seventh lap.

“I was lucky enough to be in the right place at the right time,” said Aron said. “I might not have been the fastest out there, but it makes me all the happier that I won anyway.”

The misfortune of these two opponents also benefited Hauger, who had made an impressive charge through the field from 14th on the grid. At one point, in fact, he temporarily took the lead from Krütten. But luck deserted the young Norwegian in the third race of the weekend when, with just two laps to go, he was forced to retire with a puncture to the front right tyre. Meanwhile, Aron seized his chance to relegate Krütten and the fast-approaching Pourchaire to the lower rungs of the podium. They were followed across the line by Leclerc and Alatalo.

Hauger, who had won his first race in ADAC Formula 4 on Saturday, was the first to take the chequered flag in the Sunday morning race. However, he was subsequently given a 30-second penalty for ignoring yellow flags, which dropped him down to 14th.

The next event on the ADAC Formula 4 calendar will be staged as part of German Grand Prix weekend at the Hockenheimring in seven weeks’ time. The free-to-air TV channel SPORT1 is showing the races from the fifth season of the ADAC High-Speed Academy. In addition, all races can be watched online via the livestreams on the ADAC Formula 4 Facebook channel, on YouTube.com/adac, sport1.de and on adac.de/motorsport.

Niklas Krütten (P2, Van Amersfoort Racing): “It wasn’t too bad in the end – I managed to do damage limitation. Obviously, I would rather have won, but there’s only so much you can do. All the same, I’ve scored some valuable points towards the championship. It’s good that we’re still in contention. We’ve had a tough weekend in terms of straight-line speed. The upcoming tracks should suit us better.”

Théo Pourchaire (P3, US Racing CHRS): “It’s been a very, very good weekend for me. The pace was there, the results too. In the third race, I progressed from eighth to third, which was great. I love racing like this, with so many overtaking situations. Now I’m really looking forward to the weekend we share with Formula 1, when I aim to build on my good performance from here.”