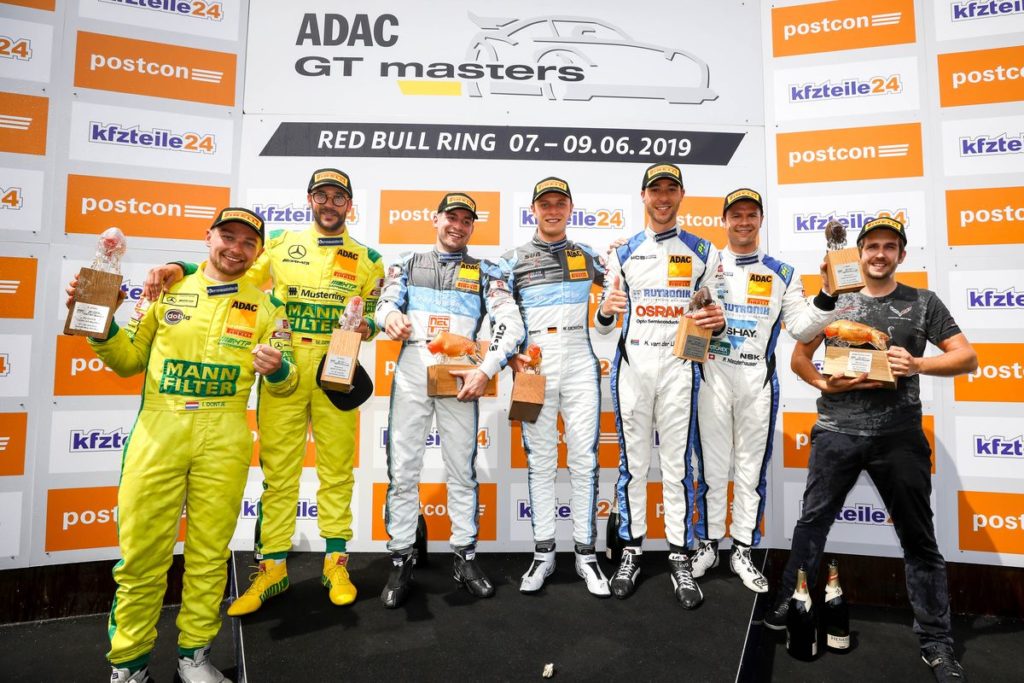 Corvette and Red Bull Ring – a match made in heaven. This was once again apparent in the Sunday race of the Super Sports Car League. Markus Pommer (28, GER) and Marvin Kirchhöfer (25, GER, both Callaway Competition) in a Corvette C7 GT3-R notched up win number three in race six of the 2019 ADAC GT Masters. It was the ninth overall for the US sports car marque on the Austrian circuit. The runner-up spot went to Mercedes-AMG drivers Indy Dontje (26, NL) and Maximilian Götz (33, GER, both Mann-Filter Team HTP), with third place going to championship leaders Patric Niederhauser (27, CH) and Kelvin van der Linde (22, ZA, both HCB-Rutronik Racing). “A great success,” said Pommer, clearly delighted with the win. “Going into the campaign, I hadn’t expected such a strong start to the season and certainly not to win three of the first six races, especially with this being my first year driving a Corvette.”

Corvette drivers Pommer and Kirchhöfer have everything under control

Pommer and Kirchhöfer turned in a near-perfect performance as they claimed their third win of the season. Ex-Formula 1 star Juan Pablo Montoya sent the field of 30 super sports cars on their way, but the pursuing bunch could only manage to stay in touch with the Corvette on the opening lap. Following a brief safety car deployment after a collision to the rear of the field during that first lap, pole-sitter Kirchhöfer steadily pulled away, extending his lead to more than five seconds at times. Pommer took over in the middle of the race with a solid cushion behind him, and eventually took the chequered flag with a lead of 4.6 seconds to register victory number 35 in the ADAC GT Masters for the Corvette.

By way of contrast, the contest for the remaining places on the podium was more eventful. At the start, Porsche driver Thomas Preining, who had been in fourth place on the grid, briefly moved up into P2, but David Jahn, who had started from second, retook the position on the opening lap. While Jahn remained in second place until the driver handover, Preining had to retire his Porsche with a problem after twelve laps. As a result, Mercedes-AMG driver Götz, who was contesting his 100th ADAC GT Masters race, moved up into third place. His partner, Dontje, used clever timing on the pit stop in the middle of the race to gain another position and bring the ‘Yellow Mamba’ home in second place.

Sven Barth dropped down into third position following the mandatory pit stop after his team-mate David Jahn had handed over the car to him in second place. He then came under pressure from Audi driver Patric Niederhauser, who finally passed the Corvette on Lap 34, securing third place on the podium for himself and Kelvin van der Linde, who had taken the first stint. Niederhauser and van der Linde thus go into the two-month summer break of the ADAC GT Masters still topping the table.

Barth was handed a drive-through penalty for straying outside the track limits in the closing stages, which dropped him down to eighth, meaning that fourth place went to Saturday’s winners, the BMW M6 GT3 pairing of Nicolai Sylvest (21, DK) and Jens Klingmann (28, GER, both MRS GT-Racing). Sylvest also won the Pirelli Junior classification for the second time this weekend. In fifth place were Christian Engelhart (32, GER) and Mirko Bortolotti (29, ITA) in the best of the Lamborghini Huracán GT3 Evos, fielded by local outfit Orange1 by GRT Grasser.

Max Hofer (20, AUT) and Christopher Mies (30, GER, both Montaplast by Land-Motorsport) finished in sixth place, just as they had on Saturday. The result made Hofer the best placed of the Austrian driver contingent on Sunday. Rolf Ineichen (41, CH) and Franck Perera (34, FRA, both Orange1 by GRT Grasser) finished seventh in their Lamborghini. In what was a home fixture for his team, Ineichen won the Pirelli Trophy classification. Daniel Keilwitz (29, GER) and Maxime Martin (33, BEL, both Propeak Performance) in an Aston Martin Vantage GT3 finished ninth behind Jahn and Barth, who had incurred a retrospective drive-through penalty. Completing the Top Ten were Jeffrey Schmidt (25, CH) and Christopher Haase (31, GER, both BWT Mücke Motorsport) in another Audi.

Marvin Kirchhöfer (Callaway Competition, Corvette C7 GT3-R): “The start was a bit chaotic. After the safety car went back in, I was able to pull out a bit of a gap. It is obviously to our advantage that the Corvette is traditionally strong here. But it wasn’t as easy as it looked. We had to push hard to stay ahead. Anyway, we can feel satisfied. We have so far consistently got the maximum out of the situation. After the break, we’ll be competing on tracks that aren’t so good for us, so we’ll have to prepare well for them.”

Markus Pommer (Callaway Competition, Corvette C7 GT3-R): “Marvin did a great job. After that, I had the immense good fortune that Patrick Niederhauser and Sven Barth were scrapping behind me while I had a good lead on both of them. I was in constant radio contact with the team, and I knew just how much of a cushion I had. I pushed again, but actually everything then went according to plan.”