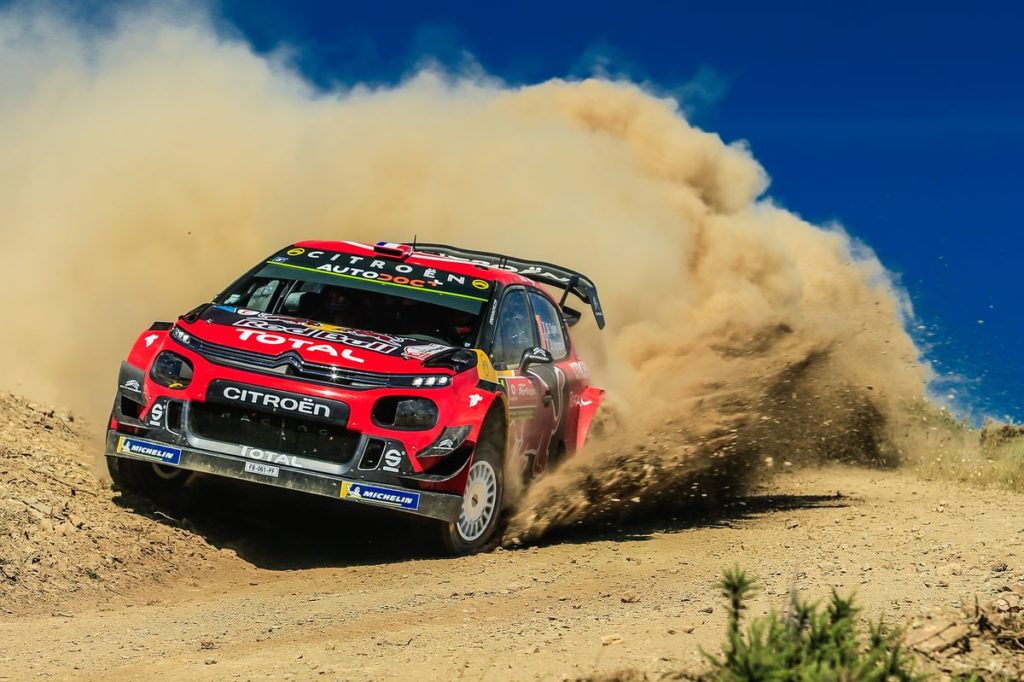 As the championship enters the second half of the season, Citroën Total World Rally Team crews Sébastien Ogier – Julien Ingrassia and Esapekka Lappi – Janne Ferm prepare to tackle one of the year’s most technically demanding events in the idyllic setting of Sardinia, with the crystal blue water of the Mediterranean forming a magnificent backdrop.

Having claimed six podium-finishes in seven races since the start of the year and secured stage wins at every round contested thus far on gravel in the C3 WRC, Sébastien Ogier and Julien Ingrassia really are the kings of consistency. They will be intending to make use of their unrivalled competitiveness and incredible race craft again at this rally, where they have already scored three wins (2013, 2014 and 2015). Despite Citroën’s experience in Sardinia, where the team has won five times, it will be difficult to repeat the feat this year, given that the crew will be first in the running order on Friday and that the grip on the gravel roads here improves significantly as more cars complete the stages. However, comforted by the valuable and effective work done in testing with the team in first-run conditions, the championship leaders will undoubtedly once again be digging deep to make the very best of their situation as they continue to chase a seventh consecutive world title.

Best performer with six stage wins, including the Power Stage, on only their second race in a WRC in 2017 before going even better last year to finish third overall, Esapekka Lappi and Janne Ferm have performed brilliantly during each of their appearances in Sardinia in a top-flight car. It is an event they are getting to know well and Citroën’s Finns will also have a good position in the running order on Friday’s leg (ninth). They will therefore be able to get their bearings from the word go and then attempt to build on the clear breakthrough made in Portugal in handling the C3 WRC on gravel and secure a strong result here.

The Citroën Total World Rally Team prepared for Portugal and this round, one of the most technical of the season, during two days of testing in Sardinia back in mid-May on stages previously used as part of the island rally. Encouraged by the progress seen in the C3 WRC in Portugal, the French team has redoubled its efforts behind the scenes to keep improving on the Italian island.

Pierre Budar, Citroën Racing Team Principal : “This rally is always a real challenge for crews and cars alike. It will be especially tough for Sébastien and Julien, given that they will be once again cleaning the roads for their rivals on day one, where the phenomenon is undoubtedly even more acute here than in Portugal.  Having said that, we know how talented and competitive these guys are. They will certainly be doing their very best to deal with what is a clear disadvantage, especially as the tests we held before Portugal enabled us to make further improvements to C3 WRC. That was confirmed during the rally, even if it is was difficult to show it. Meanwhile, Esapekka has a great chance here given his position in the running order. He’ll need to show consistency throughout the race and manage to keep it together from start to finish. He certainly has the ability, we’re convinced of that, and we’re going to do what we can to support him as effectively as possible to deliver the goods.”

Sébastien Ogier, Citroën Total WRT driver : “Running first on the road in Sardinia means we can more or less write off our chances of winning from the word go, given how much the stages clean here. It looks like we won’t be getting any help to upset the odds from the weather, with no forecast for a repeat of the rain that fell last year. So I’m expecting a tough weekend but as ever, I’ll be giving it my absolute maximum, regardless of the circumstances, and we’ll see how many points we have at the end of the weekend. The C3 WRC has clearly progressed recently and I had a good feeling in Portugal. Our performance on day one will once again largely determine our overall result.”

Number of appearances at the event: 11

Esapekka Lappi, Citroën Total WRT driver : “Obviously, we have learned the lessons from Portugal. As regards Sardinia, it’s a rally where you can’t push flat out all the time, especially on the second runs, because you have to think about taking care of the car and looking out for loose rocks. Given that we are starting in ninth position in the running order on day one, we should in any event have an advantage. It’s up to us to make the most of that. If we keep the same speed we had in Portugal and we don’t make any mistakes during the three days, we should secure a good result. I’m determined to produce a solid, consistent performance in all three legs. That really is my number one priority this weekend.”

Number of appearances at the event: 4

With just twenty-two kilometres different to last year’s rally, the route has undergone only minor changes. It nonetheless features the full range of local difficulties. Narrow, low-grip roads covered with a fine layer of sandy gravel, lined by bushes and trees, leave no room for error, both in pace notes and driving.

With hard base roads, covered by a sandy surface that is swept clear as more cars come through the stages, and invariably high temperatures, especially in the afternoon, this round is particularly hard on the tyres. Hard compound Michelin tyres are therefore almost mandatory on the second loop. In the morning, however, depending on your position in the running order, the smart move may just be to combine them with mediums to try and get more grip if you’re stuck cleaning the road.