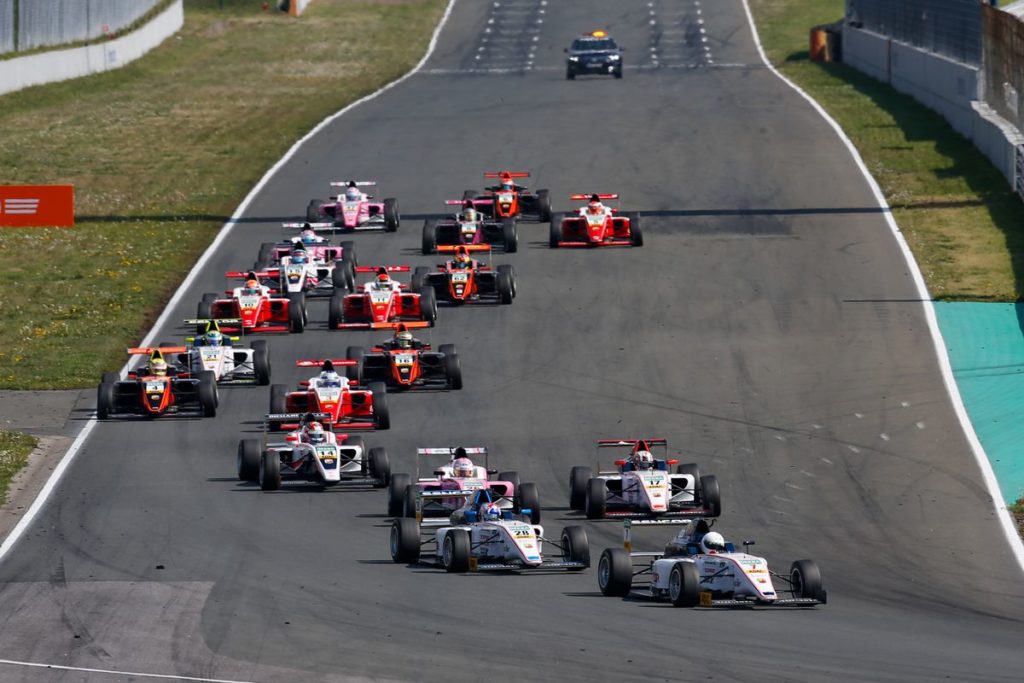 It’s time for the next round of the ADAC Formula 4! Racing will finally continue at the Red Bull Ring this weekend (June 7th to 9th) some six weeks after the exciting Oschersleben season opener. Races four, five and six will be staged at Spielberg. Can Roman Stanek (15, Czech Republic, US Racing CHRS) repeat his fine showing from the opening weekend? Or will his rivals led by Arthur Leclerc (18, Monaco, USA Racing CHRS), brother of Formula 1 shooting star Charles Leclerc strike back? The first meet to be held at a Formula 1 circuit this year is certain to be a real highlight and six guest entrants will be there ready to join this weekend’s ADAC Formula 4 field. SPORT1 will broadcast the ADAC Formula 4 races live on TV. As usual, racing can also be watched live on the ADAC Formula 4’s Facebook channel, at YouTube.com/adac, sport1.de and at adac.de/motorsport.

Most of the junior drivers only know the Red Bull Ring from TV when their big idols from Formula 1 contest the Austrian Grand Prix along with ADAC Formula 4 patron, Sebastian Vettel. Or maybe from PlayStation, as Alessandro Ghiretti (17, France, US Racing CHRS) reveals with a broad grin. Whatever, this much is clear, the ADAC Formula 4 drivers are really looking forward to the second race weekend of the season. “It’s time to finally get going again,” said Niklas Krütten (16, Germany, Van Amersfoort Racing).

15-year-old Czech rookie Roman Stanek really made a name for himself in the Oschersleben season opener at the end of April and took the championship lead. Lining up for Ralf Schumacher and Gerhard Ungar’s team, US Racing CHRS, he secured a win and a second place at Oschersleben. But Stanek is far from satisfied with that. It was a “good start”, he says: “But no more and no less. There are still many races to be run and many more points to score.”

Stanek gets tips and tricks from someone we already know. 2018 champion Lirim Zendeli gives the rookie practical help and advice. “We get along really well and enjoy chatting with one another,” said Stanek, adding mysteriously, “But I can’t give you any details. I’ve been looking forward to the Red Bull Ring for weeks. If things go as well as they did in Oschersleben, then of course, I won’t object.”

Stanek’s team-mate, 18-year-old Arthur Leclerc, finished the second race of the season in third place and is also looking forward to racing on the fast Formula 1 circuit. If he needs any advice, then he should have a word with his brother, Charles Leclerc, who secured a points-scoring finish for ninth place in his Sauber racing car in Austria. The Formula 1 stars will be back in action again at the Red Bull Ring towards the end of June.

Zendeli won one of the ADAC Formula 4 races at the Red Bull Ring last year. The other two wins went to Brazilian Enzo Fittipaldi and Liam Lawson from New Zealand. Unlike at Oschersleben, the main focus at the circuit in the mountains of Styria is on the high-speed passages. Qualifying is also particularly important here. Since the ADAC Formula 4 first held its races at the Red Bull Ring in 2015, the pole-sitter has subsequently gone on to win the first race every time.

The Austrian circuit set in the mountains is also the venue for the first foreign leg of this year’s ADAC Formula 4 campaign. After racing in Austria, the motor racing talents from the ADAC High-Speed Academy will get ready for the next big highlight of the year when the drivers from the German formula racing series for juniors will line up at Hockenheim as part of the support programme for the German Formula 1 race.

0 0 0 0 0
Previous : The ADAC GT Masters at the Red Bull Ring: High-speed racing in the Alps
Next : Appendicitis! Pietro Fittipaldi to replace Jamie Green in DTM at Misano