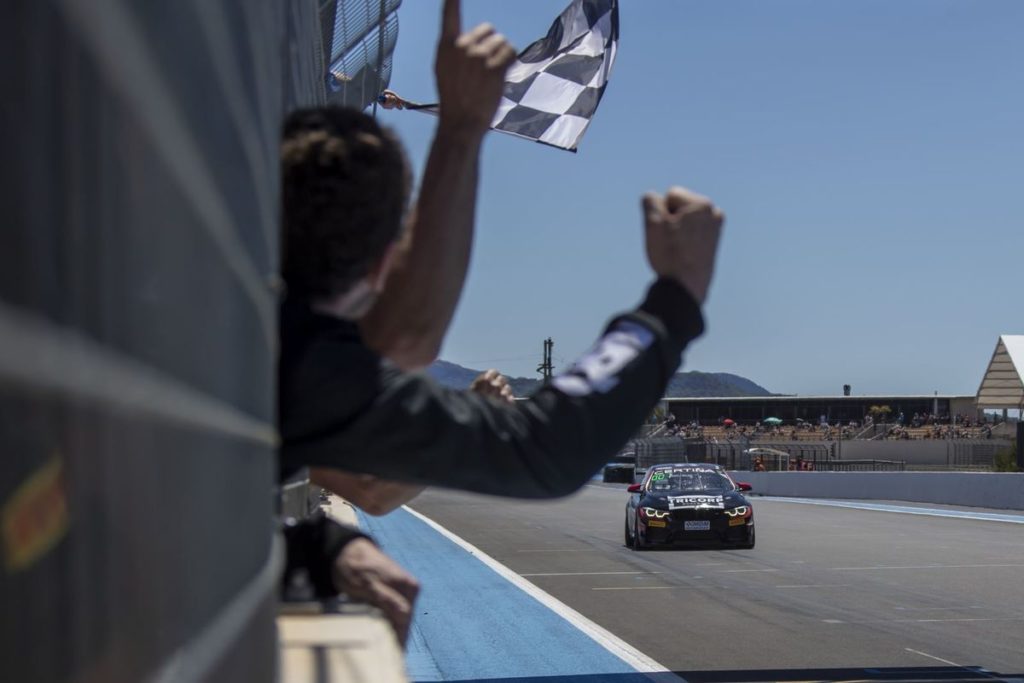 MDM Motorsport scored their second victory of the GT4 European Series weekend at Circuit Paul Ricard, after another flawless race from Simon Knap and Alec Udell in the #25 BMW M4 GT4. In Pro-Am victory went to the W&D Racing Team BMW M4 GT4, whilst the #48 CMR Alpine A110 GT4 won the Am class.

Simon Knap started the second race of the weekend from pole position and the Dutchman kept the lead off the line. Behind Knap, Jan Kisiel, Euan McKay and Benjamin Lessennes were battling for second place, until a collision between the #777 Schwede Motorsport Mercedes and the #9 CMR Alpine triggered an early safety car period.

McKay tried to overtake Knap at the restart, but the Dutchman kept his concentration and pulled out in front of the Ekris M4 GT4 again into the first combination of corners. Lessennes managed to pass Kisiel, to take third place on lap seven.

Knap pulled away from McKay and Lessennes, increasing his lead to almost three seconds by lap eight. The #25 MDM Motorsport BMW came into the pits for its mandatory stop as soon as the pit window opened, while Lessennes and Kisiel overtook McKay, who then opted to follow Knap into the pits.

At the end of lap 13 Equipe Verschuur and Leipert Motorsport called their drivers in, but the extra laps didn’t help either of them of returning in front of the MDM Motorsport BMW, now driven by Alec Udell. In fact, the Ekris Motorsport team sent Ricardo van der Ende out too soon, resulting in a one-second stop and go penalty.

As Van der Ende came in to serve his penalty, Daniel McKay and Max Koebolt moved up into second and third. Behind the top three True Racing driver Patric Niederhauser was fourth, with W&D Racing Team and Team GT fighting for fifth place overall.

Udell drove off into the distance to take an unchallenged win. The American crossed the line 5.758s ahead of Daniel McKay, with Max Koebolt completing the overall and Silver Cup top three, just 0.167s behind the Equipe Verschuur McLaren.

The #16 True Racing KTM X-Bow GT4 finished in fourth, followed by the #18 PROsport Performance Aston Martin and Ricardo van der Ende in the Ekris Motorsport M4, who went from ninth to sixth on the penultimate lap.

In Pro-Am W&D Racing Team’s Massimiliano Tresoldi and Paolo Meloni secured the first win of their 2019 campaign. The #71 BMW M4 GT4 made it into the overall top three at one point, but eventually finished eighth overall.

The #2 Leipert Motorsport Mercedes AMG GT4 of Luci Trefz and Marcus Paverud came across the finish line in second place, 1.357s behind the winning BMW, whilst Nicolas Schöll and Jan Kasperlik claimed their second podium finish of the season, by finishing third with the #22 Allied Racing Porsche 718 Cayman GT4 CS MR.

A late lead change in the Am category meant CMR drivers David Loger and Eric Mouez scored their second win of the season at Circuit Paul Ricard. Two laps from the end the #48 Alpine A110 GT4 passed the #56 Team GT McLaren 570S GT4 of Christian Danner and Bernhard Laber. Maciej Marcinkiewicz and Lukasz Kreski finished the race in third place.

Marcinkiewicz and Kreski were initially classified as winners of Saturday’s race, but a 30-second post-race penalty dropped them to fourth and promoted Danner and Laber to first place.

Alec Udell, #25 MDM Motorsport BMW: “The car was good this weekend, MDM put together a great car for us. I’m very happy with the car and with the team. This is good for our championship run. We’re content with this win, we celebrate today and then we push forward tomorrow.”

Simon Knap, #25 MDM Motorsport BMW: “A great result. It couldn’t get any better. Everything came together for us. We didn’t make any mistakes, the team did everything right. A top performance from our team!”

Massimiliano Tresoldi, #71 W&D Racing Team BMW: “I’m very happy about the organisation and the team this weekend. They did a great job. Paolo was driving strong and got the pole for this race. A weekend that has paid off the amount of work we invested!”

Paolo Meloni, #71 W&D Racing Team BMW: “It was a great weekend, it was the first victory for us and I want to thank my team for the great work. Compliments for the organisation as well, as the races were really good!”

Eric Mouez, #48 CMR Alpine: “The first part of the stint was pretty calm as it was mainly under safety car. On the other hand, David did very good race as exiting the pits in third position, he managed to close the gap and to overtake the McLaren in front of him.”

David Loger, #48 CMR Alpine: “I had a lot of fun racing today which is the main thing. The safety car period secured our position and Eric didn’t lose time. I am very happy about my stint, I managed to overtake and set up of the car was very good to me.”