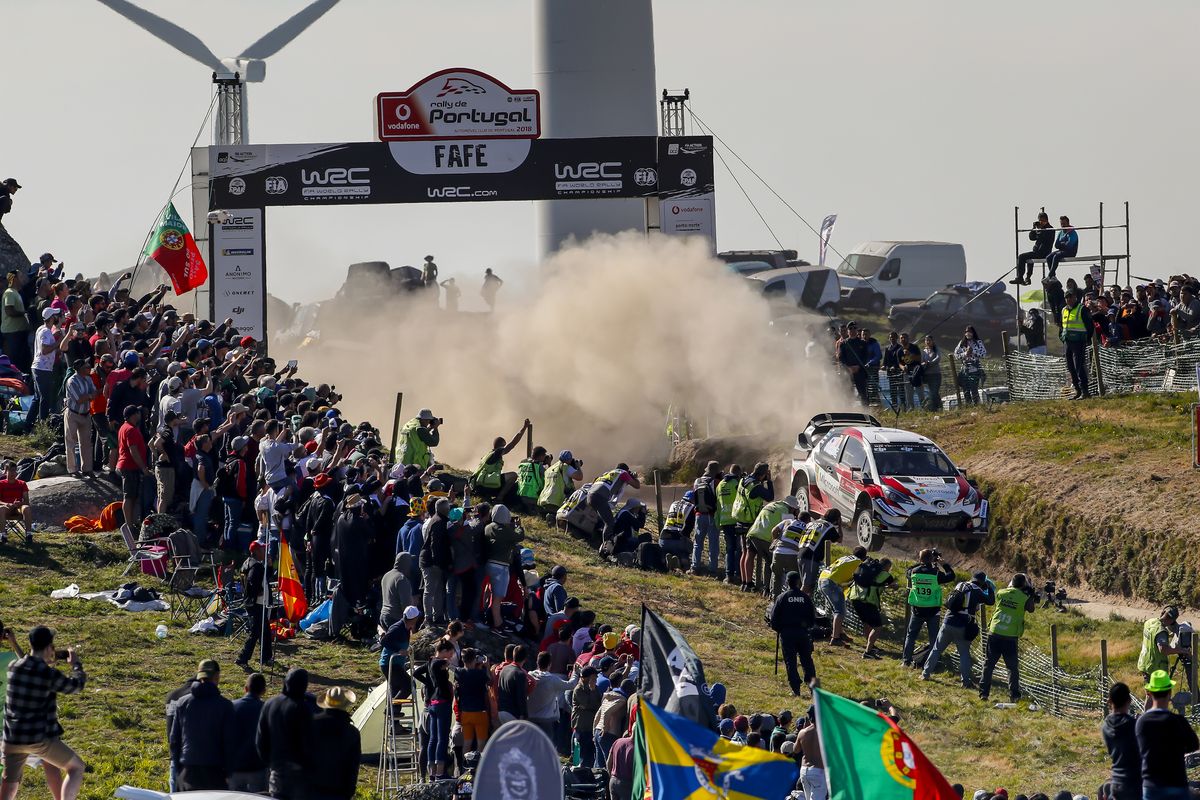 Two gravel rallies in the south of Europe await the TOYOTA GAZOO Racing World Rally Team as the 2019 season passes the halfway stage. Round seven in Portugal takes place on May 30-June 2, quickly followed by round eight on the Italian island of Sardinia on June 13-16. Together, the two events provide the last opportunity for the team and its drivers Ott Tänak, Jari-Matti Latvala and Kris Meeke to add to their points tallies prior to the championship’s summer break. After taking his second win of the season last time out in Chile, Tänak leads the team’s charge in second place in the drivers’ standings, only 10 points away from the top.

Rally de Portugal is characterised by fast but technical roads on a sandy gravel surface. This usually offers limited grip for those running first on the road for the opening passes of stages, and then becomes rocky and rutted for the second pass. The event will again be based in Matosinhos in the outskirts of Porto, but travels south to Coimbra for Thursday’s ceremonial start before Friday’s action around nearby Arganil: an area last visited by the WRC in 2001. Two loops of three stages will be tackled without a mid-day service, and there’s also a super special stage at Lousada to round out the day.

The remainder of the rally will be more familiar to the crews: Saturday has three stages each run twice, two of them in the Cabreira mountains, before five stages in total on Sunday around Fafe, including two passes of the famous stage of the same name and its big jump towards the finish.

Rally Italia Sardegna is made up of quick, narrow stages with a fine sandy surface that gets swept away by each passing car to leave a rockier, rutted road. Exposed rocks and trees at the side of the road can catch out the unwary, while temperatures can often be very high. The rally will be once more based in Alghero, with a Thursday evening super special stage at the nearby Ittiri motocross track kicking off the action.

The intinerary is very similar to the 2018 event, with only minor differences. Friday features four stages to the north-east, all driven twice, while Saturady’s stages are the furthest east, with two loops of three stages including Monte Lerno, home to the famous Micky’s Jump. Sunday takes place on the cost north of Alghero with a pair of repeated stages.

As was the case with the two previous rallies in Argentina and Chile, the close proximity of the events in Portugal and Sardinia means they are defined as ‘linked rallies’ by the regulations. This states that for cars classified in the final stage in Portugal, the same chassis, engine and transmissions (including spare transmissions) must also be used in Sardinia.

Quotes:
Tommi Mäkinen (Team Principal)
“After we found some great, smooth roads in Chile, we move back towards a rougher surface in the next two events, especially in Sardinia. Portugal isn’t normally too bad: it can be quite nice and fast, depending on the conditions. The Friday this year is going to be new for the drivers with stages around Arganil: the last time we went there was when I won the rally in 2001. It’s a challenging area, with many different roads the organisers can use. We have been doing a lot of work to improve for rougher conditions, and we had a good test in northern Portugal a few days ago to help us prepare for these upcoming events.”

Ott Tänak (Driver car 8)
“These next two events are rallies that I enjoy, and they both have some special meaning to me: Portugal was the first WRC round I ever competed in, and Sardinia is the place where I took my first podium and my first victory. They are quite fast rallies in places but they can also be very tough, as we experienced last year. But the team has been working really hard and I believe we are well-prepared. To win in Chile was really important: it has definitely put us back into the fight. Now we need to keep focused and try to take some good points from these next two rallies.”

Jari-Matti Latvala (Driver car 10)
“Portugal always reminds me in some ways of Argentina with the sandy roads, although it isn’t quite as rough. But this year on the Friday we’ll go to Arganil, which is a famous area from Rally Portugal in the 1980s and ’90s, and where the road is a bit more like bedrock and harder for the tyres. In Sardinia, the main differences are that the roads always have a hard base, they’re narrower and there are lots of big rocks at the sides that you need to avoid. I came away from my test last weekend really happy: I feel we’ve improved the car in rough conditions, so I’m looking forward to these rallies confident that we’ve got a strong and fast car. I hope we can be back on the podium.”

Kris Meeke (Driver car 5)
“I’m looking forward to Portugal. It’s a rally I know well and where I’ve always been quite strong – I won it in 2016 and I’ve led there in the two years since. As for Sardinia, I haven’t driven much there over recent seasons, although I still know the island fairly well from the past. The last few events have been frustrating for us. We have had the speed to be on the podium, so now we really need to focus on translating that into a strong result. I had a good test on Monday – we’re always trying to find some ways to improve the car – and I hope that we’re in good shape for the next couple of events.”

What happened last year?
In Portugal, the team had a difficult start with Ott Tänak’s rally ending in stage two when he hit a rock and damaged his car’s cooling system, while Jari-Matti Latvala’s suspension broke in SS3. Latvala was able to restart and show good speed, as could Esapekka Lappi, who won the Power Stage and finished fifth overall. In Sardinia, all three drivers fought for a place on the podium, with Lappi eventually finishing third. Latvala was seventh and Tänak was ninth: both restarted after earlier problems.