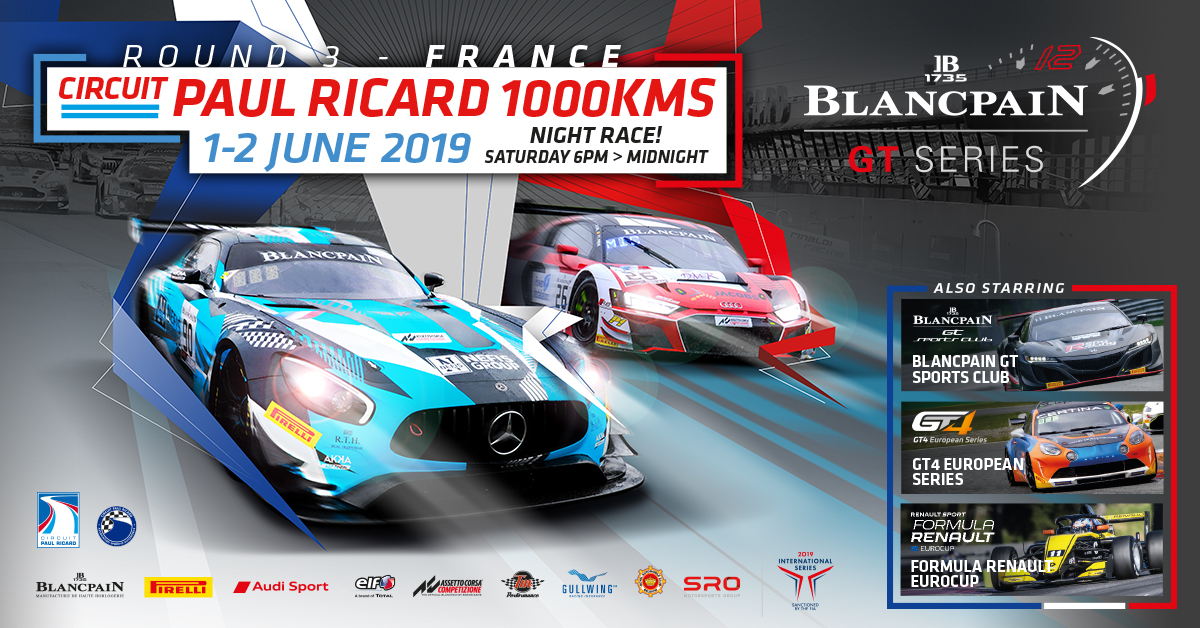 The Blancpain GT Series makes its annual trip to Circuit Paul Ricard next weekend (31 May – 1 June) when a 49-car field will tackle a 1000km race into the sunset.

The fourth round of the overall championship and the third on the Endurance Cup schedule, the French venue represents one of the fastest and most visually distinctive stops on the calendar. First opened in April 1970 near the village of Le Castellet, the track’s most famous feature is the long Mistral straight. Named after the wind that blows from southern France into the Mediterranean, it stretches to 1.8 km (1.1 miles) and will see Blancpain GT Series drivers reach top speeds in excess of 290km (180mph).

The event has run each year since 2012, beginning as a three-hour contest before expanding to its present format from 2015 onwards. During that time it has earned a reputation for close, unpredictable racing, with six different brands triumphing from seven previous runnings. Bentley is the only two-time winner (2014 & 2017), while Audi (2012), BMW (2013), Nissan (2015), McLaren (2016) and Lexus (2018) have each taken one victory a piece.

What’s more, the race serves a secondary role as a warm-up for the season-defining Total 24 Hours of Spa (25-28 July), particularly by allowing teams to practice the crucial ‘Joker Pit Stop’ in a competitive environment. Each crew will be able to play one Joker at the upcoming race, while four will be available during the twice-around-the-clock Spa contest.

Last year’s trip to Circuit Paul Ricard culminated in particularly thrilling fashion, with the #14 Lexus RC F GT3 and the #8 Bentley Continental GT3 going wheel to wheel during the closing stages. In one of the most dramatic conclusions in Blancpain GT Series history, the Lexus made a race-winning pass on the very last lap, securing the Japanese brand an unforgettable maiden victory in the championship.

In what is already proving to be an ultra-competitive 2019 season, six different crews have stood on the overall podium across the opening events at Monza (14 April) and Silverstone (12 May). The same full-season field of 18 cars will once again contend for Pro class honours at Circuit Paul Ricard, with a number of those squads tweaking their driver line-up ahead of the event.

At Strakka Racing (Mercedes-AMG GT3), David Fumanelli steps into the #43 machine to replace Jack Hawksworth, while Bentley Team M-Sport adds Callum Macleod to the #108 Continental GT3 crew in place of Alex Buncombe. The latter move is part of a planned rotation policy by the British marque, with both Macleod and Buncombe set to form part of an expanded four-car Bentley effort at this year’s Total 24 Hours of Spa. Finally, Alex Lynn will make his series debut in the #76 R-Motorsport Aston Martin Vantage AMR GT3, with temporary replacement Nicki Thiim making way.

With two races already run the battle for the 2019 championship has started to take shape. Newcomer Orange1 FFF Racing leads the teams’ standings, while its #563 crew of Andrea Caldarelli, Marco Mapelli and Dennis Lind tops the drivers’ table.

The Chinese squad has shown excellent long-distance performance with the 2019 Lamborghini Huracan GT3, while Grasser Racing has demonstrated the car’s single-lap pace with back-to-back pole positions. It is now more than two years since a Lamborghini took overall victory in the Endurance Cup, but the Italian marque has clearly found the sweet spot with its new machine.

Porsche and Ferrari have also hit the ground running this term. Dinamic Motorsport took a famous victory at a rain-soaked Monza with its 911 GT3 R, while SMP Racing earned a superb win at Silverstone with the venerable 488 GT3. Both squads will be targeting more silverware this weekend, while ROWE Racing adds further competitive firepower to the Porsche effort.

The other two brands to secure podium finishes this term are Mercedes-AMG and Audi, both of which will be represented by three squads at Circuit Paul Ricard. Belgian Audi Club Team WRT, Sainteloc Racing and Attempto Racing will field the 2019-spec Audi R8 LMS, while Black Falcon, AKKA ASP Team and Strakka Racing fly the flag for Mercedes-AMG.

As a two-time winner at Circuit Paul Ricard, Bentley Team M-Sport knows how to succeed at the French event. Indeed, the squad’s most recent triumph came at the same venue two years ago, which will inspire hopes of a repeat showing this weekend. Fellow British brand Aston Martin will also be targeting a strong result with Garage 59 and the two-car R-Motorsport effort as the latter looks to score its first points of 2019.

As ever, there will be plenty of action to follow beyond the Pro class battle. The Silver Cup can boast a 15-car field for Circuit Paul Ricard, with Scuderia Villorba Corse adding its #133 Mercedes-AMG GT3 in preparation for contesting the Total 24 Hours of Spa.

AKKA ASP (Mercedes-AMG) and Grasser Racing (Lamborghini Huracan) emerged on top at Monza and Silverstone respectively, though in such a competitive class there are at least a dozen potential winners next weekend. There is a driver switch at Jenson Team Rocket RJN (#22 Honda NSX GT3), where Welsh racer Ryan Ratcliffe steps in for Struan Moore.

There is little to choose between the Pro-Am runners, too. Victories for Tempesta Racing (Monza) and AF Corse (Silverstone) have given Ferrari a clean sweep thus far, though there is no suggestion that the Italian brand is ahead of the competition. Several other crews should be in contention at Circuit Paul Ricard, including the all-French line-up of Jean-Luc Beaubelique, Mauro Ricci and Jim Pla in the #87 AKKA ASP Mercedes-AMG GT3.

In the Am Cup class, a brace of race wins for the #77 Lamborghini Huracan GT3 has seen the Barwell Motorsport crew open up an impressive early lead. The British squad will target a fifth consecutive win at Circuit Paul Ricard, but face plenty of opposition in this highly competitive category.

In particular, Tech 1 Racing looked to have found significant speed at Silverstone, where Fabien Barthez recorded the class-leading race lap in the #23 Lexus RC F GT3. The French outfit will be in confident mood as they seek to end Barwell’s run of victories, with Eric Cayrolle joining Barthez and Bernard Delhez for the squad’s home event.

While the race plays out on the track, Circuit Paul Ricard will also host its traditional rooftop party on Saturday evening. Beginning with the green flag at 18.00 and running until 03.00 the following morning, the festivities will be soundtracked by a number of top DJs, with Nicolas Susini set to provide the headline performance.

In terms of on-track entertainment, fans can look forward to extensive support action from the GT4 European Series, Blancpain GT Sports Club and Formula Renault Eurocup, all of which will contest races across Saturday and Sunday.

As the season’s only 1000km contest, the event adopts a different timetable from other Endurance Cup rounds. Kicking off with the bronze test at 09.00 on Friday, the full field will hit the track for the first time at 13.10 for free practice and again at 17.00 when pre-qualifying begins. Both sessions will give competitors 90 minutes of crucial running.

The grid will be set during qualifying at 10:45 on Saturday morning, while the race will get underway later that day at 18.00. With a maximum time limit of six hours, the winning crew will take the chequered flag around midnight before making their way to the podium for a hard-earned champagne celebration.

It promises to be a superb event both on and off the circuit as the season races into the crucial summer months.