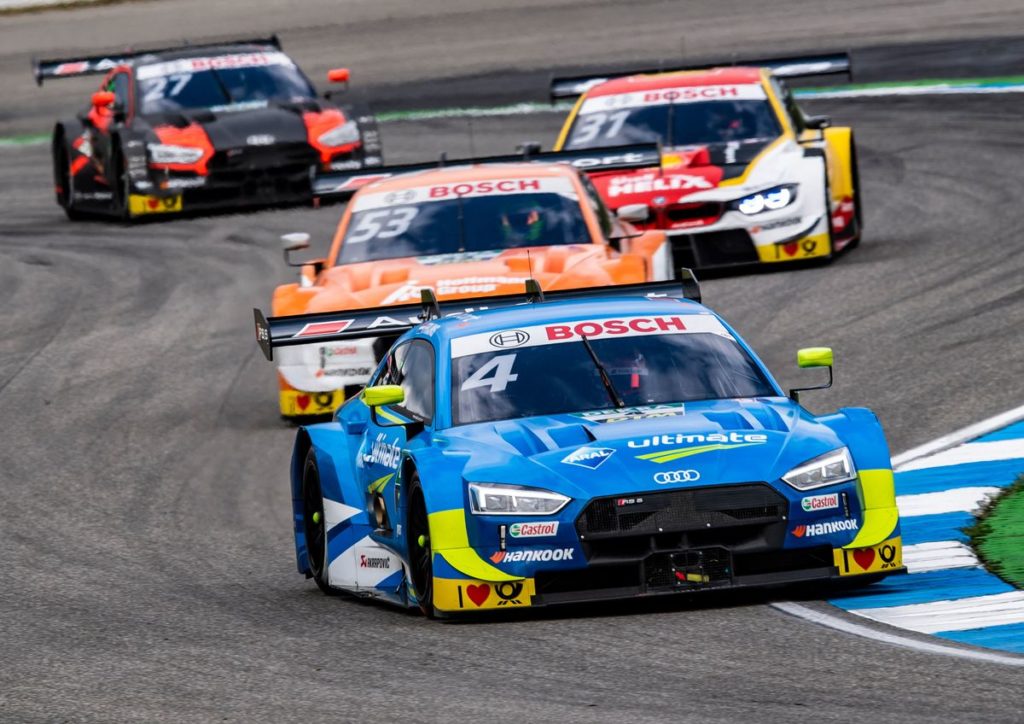 Following the spectacular start to the new turbo era, DTM fans can already look forward to the next treat: this weekend (May 18/19), the popular touring car racing series is returning to its roots at Zolder, Belgium.

The four-kilometer race track near Hasselt is regarded as highly challenging. Local hero Robin Frijns, who lives in Lanaken, only about a 20-minute drive from the venue, calls the circuit: “Mini Nordschleife – just a small mistake and you’ll end up in the wall.” René Rast refers to it as an awe-inspiring “journey into the unknown.” “None of us can really judge what it will be like to drive a DTM car at Zolder.” Mike Rockenfeller most recently contested a race there seventeen years ago. Loïc Duval, Jamie Green and Nico Müller only know the circuit from the simulator.

35 years ago, on March 11, 1984, Zolder hosted the first DTM race in history – then still officially called the “Deutsche Produktionswagen-Meisterschaft” (“German Production Car Championship”). At that time, Duval and Green were both only one year old, Rockenfeller was four months old, while Frijns, Müller and Rast had not even been born yet.

For Audi Sport, Zolder is also a race with special history. In April 1990, the brand competed in the DTM for the first time with a factory-backed commitment in the traditional “Bergischer Löwe” event. Many DTM fans still remember the fightback and wild drifts by Hans-Joachim Stuck in the Audi V8 quattro that was huge compared to the cars from the competition. It propelled today’s DMSB president from fourteenth on the grid to third position – marking the first of 312 podium finishes clinched by Audi in the DTM to date.

In May 2002, Laurent Aïello in the compact Abt Audi TT-R won the last DTM race at Zolder so far. Christian Abt, the uncle of today’s Audi Formula E driver Daniel Abt, perfected an Audi one-two result on that day in the pouring rain.

Head of Audi Motorsport Dieter Gass had his first racing commitment with Audi Sport at Zolder. “That was in 1995 at the season opener of the German Super Touring Car season,” Gass recalls. “I was part of the team support for the ROC squad from France. The race was started in the wet and ended on a dry track. Audi clinched a one-two – ahead of three cars from BMW.”

Due to the track characteristics, Gass expects “extreme loads to be placed on the brakes” during the DTM’s return to Zolder. In as many as four sections, the more than 610-hp Audi RS 5 DTM cars have to slow down from high speeds.

“Racing in a DTM car at Zolder is going to be a very special experience,” says Robin Frijns, whose passion for motorsport was sparked at the age of six while visiting a race at Zolder. “I know the track really well and have contested many races there, most recently in the GT3 category with the Audi R8 LMS. The circuit is tricky and also the weather is often unpredictable in Belgium. Especially in the fast first sector, you can either gain or lose a lot of time. The best opportunities for overtaking exist heading into the first corner or the chicane before the start-finish line.”

Frijns is traveling to his home round as the runner-up in the standings. The Dutchman who lives in Belgium is separated from the current leader, Marco Wittmann (BMW), by only three points. Three other Audi drivers, René Rast, Nico Müller and Mike Rockenfeller, are in the top five of the drivers’ classification. In the manufacturers’ standings, Audi is leading with 110 points ahead of BMW (93) and Aston Martin (9). Audi Sport Team Abt Sportsline is in the top spot of the teams’ standings.

Zolder is also a home round for Audi’s WRT Team Audi Sport customer entry that celebrated a strong DTM debut at the season opener at Hockenheim by scoring a point on Saturday and setting the fastest race lap on Sunday.

Both DTM races on Saturday and Sunday will start at 1.30 PM. SAT.1 will begin to air live coverage at 1 PM (CEST). Tickets and fan packages for attending the event are available online at www.audi.com/dtm. Fans should not miss the opportunity to visit the Audi Thrill Zone at Zolder either. The hub at the DTM Fan Village offers virtual races, autograph sessions, interviews and many other attractions for fans.

0 0 0 0 0
Previous : Return to a historic venue: BMW Motorsport and the DTM go racing at Zolder.
Next : Back to our roots: The DTM returns to Zolder