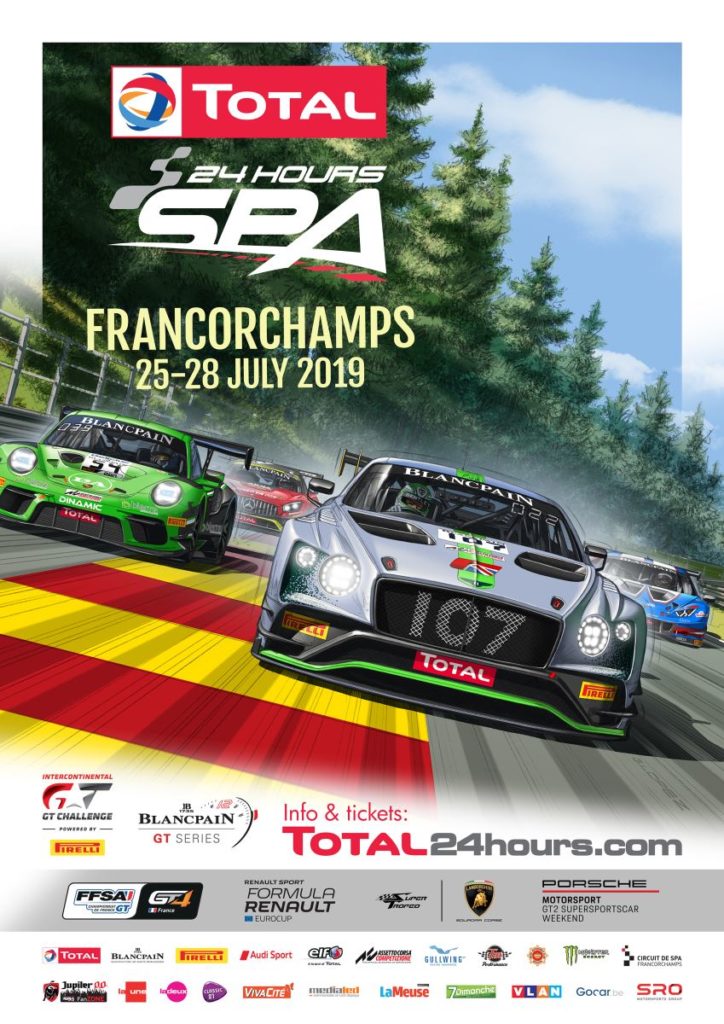 The 2019 Total 24 Hours of Spa has moved a step closer to the starting grid following the release of this year’s official poster and the full timetable for the 22-28 July event.

It marks the latest phase of preparations ahead of the twice-around-the-clock race, for which there are already 70 confirmed entrants. A total of 11 brands are set to be represented on the full entry list, which will be revealed during the official test days on 2/3 July.

The launch of the poster represents a particularly significant milestone in the build-up to the Belgian endurance classic. This year’s offering was created by the renowned French illustrator Guillaume Lopez, whose extensive list of motor racing work has featured brands, teams and drivers from across the sport. What’s more, Lopez spent several years as an illustrator for the iconic French comic creation Michel Vaillant.

There are echoes of that style in this year’s poster, particularly through the use of bold colours and the vivid sense of speed. The poster prominently depicts the #107 Bentley Team M-Sport Continental GT3, placing the British marque at centre stage in the year that it celebrates its centenary.

Outright victory at the Total 24 Hours of Spa represents the pinnacle of Bentley’s international motorsport aspirations and, in an effort to secure top honours in its centenary year, the brand will launch a four-car attack on the Pro class. Alongside the #107 Bentley, leading brands Porsche, Mercedes-AMG and Lamborghini are also depicted against a backdrop that is unmistakably Spa.

The 2019 poster follows last year’s memorable effort, which was designed by the late Claude “Clovis” Viseur in the style of a birthday card to celebrate the greatest moments from the event’s long history. Prior to this, the poster had maintained a consistent style from the launch of the Blancpain GT Series in 2011 through the 2017 edition, depicting cars on the iconic Spa-Francorchamps circuit against a setting sun.

As well as the official poster, the timetable for this year’s Total 24 Hours of Spa has also been revealed, beginning on Monday 22 July when a track day will take place on the iconic Spa-Francorchamps circuit. Returning for a second year and organised in collaboration with three-time Total 24 Hours of Spa winner Marc Duez, this will give members of the public the chance to drive their own car on the world’s greatest race track.

It will be followed on Tuesday 23 July by the first official session, with the Bronze Test taking place at 14.55. Attention moves off the circuit on Wednesday 24  for the annual parade from the circuit to Spa town centre, culminating in an autograph session that always draws vast crowds into the streets to meet the stars of the race.

From Thursday 25 July the attention shifts back to matters on-track. This year’s event features a number of high-level support series, including the new and improved Formula Renault Eurocup, Lamborghini Super Trofeo, and an impressive 50-car field for Championnat de France FFSA GT – GT4 France. All three will run on Thursday, alongside a busy day of practice and qualifying for the Total 24 Hours of Spa contenders

What’s more, the new GT2 concept will launch with a one-make race at Spa. A full field of Porsche GT2 RS Clubsport machines will tackle a pair of 30-minute contests, the first on Friday 26 July at 17.00 and a second the following day at 13.15. Formula Renault, Lamborghini Super Trofeo and Championnat de France FFSA GT will also compete on Friday and Saturday, while the decisive Super Pole session for the 24 Hours is scheduled for 18.30 on Friday evening.

The event will reach a crescendo on Saturday 27 July as the Total 24 Hours of Spa begins its 71st running at 16.30. First staged in 1924, the race is now internationally recognised as the premier event reserved exclusively for GT machinery, attracting the world’s biggest automotive brands to test themselves at the legendary circuit. This year it will run for the 19th time since making the successful crossover to GT rules in 2001.

With the official poster and timetable revealed, the countdown to this year’s event has truly begun. Excitement will continue to build over the next two months as the season-defining Total 24 Hours of Spa draws ever closer.