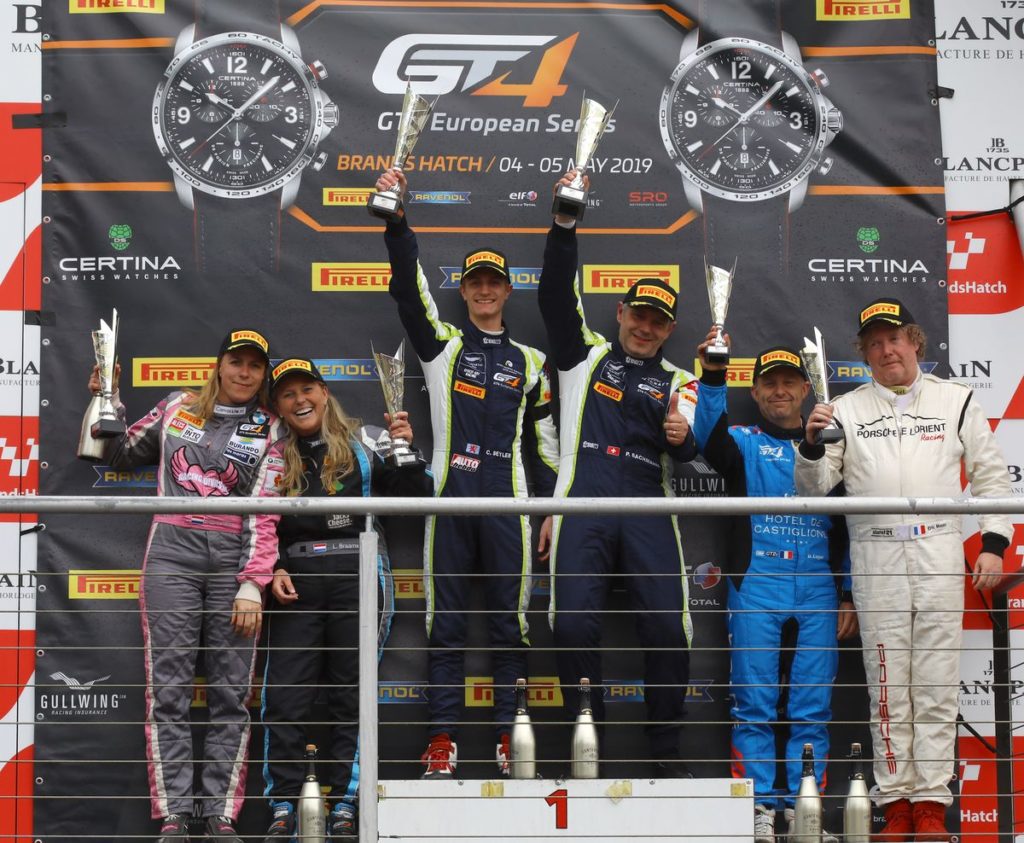 The Street-Art Racing team confirmed its progress in the second round of the GT4 European Series at Brands Hatch. Having come very close to a podium in the overall standings with Julien Darras and Jamie Vandenbalck, the Belgian team took their first victory in the AM Cup with the pairing of Pascal Bachmann-Clément Seyler. It was a good omen ahead of the next race, at the beginning of June, on the Circuit Paul Ricard!
For Street-Art Racing, there was no lack of excitement in Monza in mid-April when the GT4 European Series kicked off. As it lined up its all-new Aston Martin Vantage GT4, the Lodelinsart-based team had seen the model entrusted to Julien Darras and Jamie Vandenbalck destroyed as a result of the carelessness of an opponent. “Between Monza and Brands Hatch, there was less than three weeks and our Vantage was repaired directly at Aston Martin Racing,” said Albert Bloem, the Team Principal. “We only got the car back this Friday, at the circuit. There was still a great deal of work to do to set the car up for the English track, but our mechanics did a remarkable job and I would like to thank them most sincerely!”
The drivers themselves also wanted to do well in order to salute those people who worked so hard in the background. Unfortunately, the weather was going to play tricks on them during qualifying practice. “I started on rain tyres,” explains the Belgian driver Jamie Vandenbalck, who shares the Vantage #007 with Frenchman Julien Darras. “But the track dried very quickly and we had to settle for a 22nd position in the first session. Fortunately, Julien was then able to demonstrate our potential with the 8th fastest time in the second half of qualifying.”
In the race, the pair put in a magnificent drive on Sunday morning. Starting from 27th on the grid after the imposition of a penalty, they managed to climb up to 9th position overall, 7th in the Silver Cup.
A few hours later, Julien Darras started from 8th place on the grid and had managed to climb to 2nd place when he handed over the wheel to Jamie. And although the Belgian made a minor error, the #007 car passed the chequered flag in 4th position. “It was fine recompense for the team,” smiles Julien. “The car worked well straight away and we found the right settings. The weather was no help to us on Saturday, but it was the same for everyone. However, on Sunday we proved that we can aim for the podium. It is just a little delayed!”
First victory in the AM Cup
For Street-Art Racing, satisfaction also came from the progress of Swiss driver Pascal Bachmann and young Luxembourg driver Clément Seyler, who compete in the AM Cup, even though qualifying practice had gone rather badly. “I had started on rain tyres and, when I changed to slicks, I could not get them up to the correct temperature,” explains Pascal. “The result was a disappointing time. As for Clément, he would have set the best time of the AM competitors in his session if there had not been a red flag just before he crossed the line. The Race Director considered that he had not slowed down quickly enough and deleted all his lap times.”
The Aston Martin Vantage #17 was therefore forced to fight back strongly if there was to be any chance of victory in the AM Cup. In the first race, it crossed the finish line at the top of its class after a Homeric defence by Clément against Alpine just behind. “It was a great fight and I am happy to have resisted his challenges,” smiled the 19-year-old Luxembourg driver, who is making his GT debut this season. “Unfortunately, we were again penalised because Pascal did not immediately hear the announcement of a neutral period and overtook an opponent under the yellow flag. Even though he ceded the place immediately, the 30 second penalty we received knocked us back to second position.”
However, revenge was not long in coming, with Race 2 scheduled just a few hours later! Although for a long time he was blocked behind a McLaren which was faster in a straight line, Clément gave the car back to Pascal in 3rd place. And when the former Swiss rally driver returned to the action, he put such intense pressure on the McLaren that its driver left the track several times and was penalised. “I was then 20 seconds behind the leading Alpine,” says Pascal. “And I attacked as hard as I could to close the gap and to pass it just before the chequered flag. We finished 21st overall and this time there was nothing to stop us from keeping our first AM Cup win!”
After the unpredictable weather in England, the GT4 European Series hopes to find the sun again on 1 and 2 June, during its third meeting at Le Castellet. For Street-Art Racing, the target will be to drive both their cars to podium positions at the famous Circuit Paul Ricard.

0 0 0 0 0
Previous : Sathienthirakul and Hamprecht out front as Blancpain GT World Challenge Asia heads to Thailand
Next : 2019 Total 24 Hours of Spa kicks off with vibrant official poster