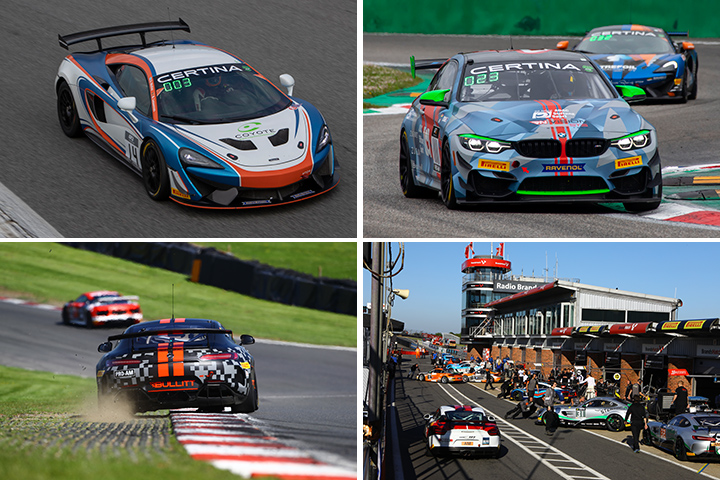 Round two of the 2019 GT4 European Series takes place this weekend at the 3.9km Brands Hatch Grand Prix circuit (4 – 5 May). The series makes its third successive visit to the British circuit, with 34 cars entered for what promises to be a spectacular Bank Holiday weekend in the United Kingdom.

Seventeen cars to battle for victory in Silver Cup

After a winning start to the 2019 season, Equipe Verschuur McLaren drivers Daniel McKay and Benjamin Lessennes head to Brands Hatch leading the Silver Cup with maximum points. The Dutch team is determined to carry its momentum through into this weekend’s two races.

With 17 cars competing in the Silver Cup, Equipe Verschuur will face stiff opposition in the second round of the season. Phoenix Racing will aim to repeat its victory from 2018, which would help its drivers Nicolaj Møller-Madsen and Cédric Freiburghaus in the #1 Audi R8 LMS in their fight for the championship.

The British circuit represents a home race for Euan McKay, who will share the #8 Ekris Motorsport Ekris M4 GT4 with former GT4 European champion Ricardo van der Ende. With Euan McKay taking on his brother in front of a home crowd, sibling rivalry could spice up the Brands Hatch weekend.

There will be four Silver Cup Aston Martin machines on track at Brands Hatch, including the PROsport Performance #18 and #19 entries. Academy Motorsport will field one Aston Martin for British drivers Will Moore and Matthew Cowley, with Street Art Racing also entering one car in Silver Cup.

Leipert Motorsport and Selleslagh Racing Team will represent Mercedes-AMG, with the Belgian team entering two cars this weekend. Both squads already finished on the podium in Monza and it would be no surprise to see the Mercedes-AMG GT4s fight for the podium again at Brands Hatch.

The #22 Allied Racing Porsche 718 Cayman GT4 CS MR will be in the Silver Cup at Brands Hatch, as Glenn van Parijs and Constantin Schöll join the German team for this round. MDM Motorsport will represent BMW again with two Silver Cup entries, while True Racing will field the two KTM X-Bow GT4 entries.

Competitive grid in Pro-Am, three-way battle in Am

RN Vision STS’ Marius Zug and Gabriele Piana top the Pro-Am standings, having triumphed once at Monza. Driving the #111 BMW M4 GT4, the German-Italian pair are set to defend their championship lead at Brands Hatch.

Trailing them by just six points after the opening round of the 2019 GT4 European Series season are young Leipert Motorsport Mercedes drivers Luci Trefz and Marcus Paverud, who claimed the Pro-Am class victory in the second race at Monza.

In the Am class, Gaby Uljee joins Liesette Braams in the #11 Las Moras by Equipe Verschuur McLaren 570S GT4. It will be a three-way battle for victory at Brands Hatch, with Braams and Uljee taking on the #17 Street Art Racing Aston Martin Vantage AMR GT4 and the #48 CMR Alpine A110 GT4. Generation AMR Super Racing will complete the Brands Hatch grid with its Aston Martin Vantage GT4, entered in the invitation class.

0 0 0 0 0
Previous : Season opener at Oschersleben ends with podium and P2 in the championship
Next : Updated Škoda Fabia R5 successfully homologated and ready for competition