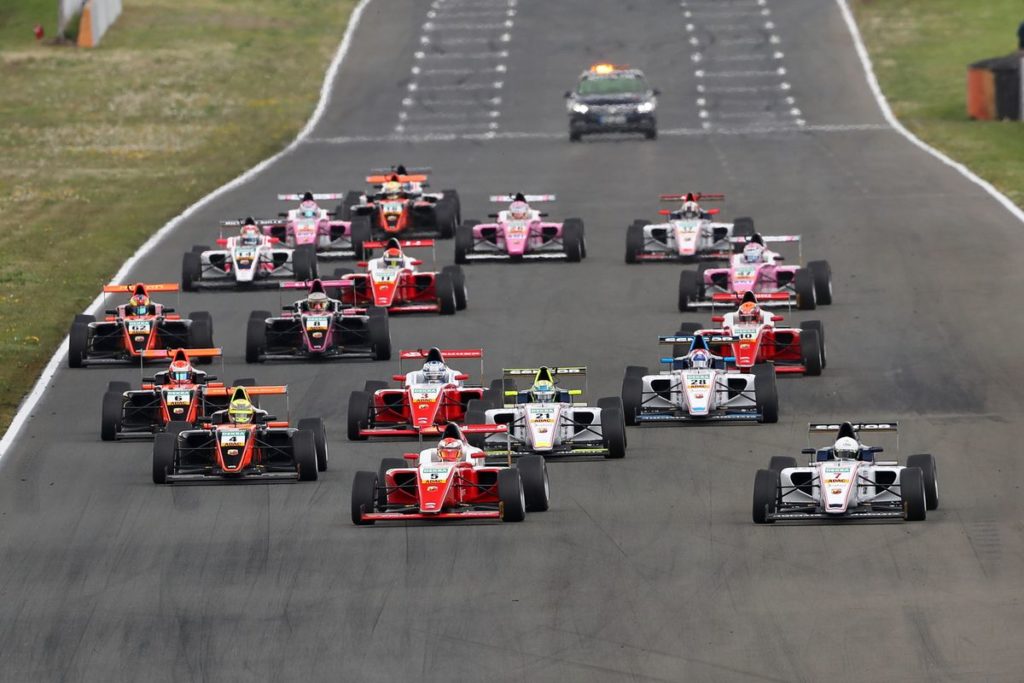 Gianluca Petecof (16, Brazil, Prema Powerteam) won the first ADAC Formula 4 race of the season at Oschersleben with an impressive solo drive from pole position. The Ferrari Junior dictated the race from the very first lap, crossing the finish line with a lead of 14.132 seconds on best Rookie, Roman Stanek (15, Czech Republic, US Racing CHRS), in second place. No driver in ADAC Formula 4 history has ever managed to win by such a big margin. After mounting a strong charge, third place went to Dennis Hauger (16, Norway, Van Amersfoort Racing), who had been eleventh on the grid.

“I feel great! The race went superbly well as far as we’re concerned,” said Petecof. “The start was a bit dodgy, but everything went according to plan after that. The car was great, and the team did a terrific job. Of course, we hope to follow that up with another win in the second race tomorrow. I’ll be in P2 on the grid. It won’t be easy, because Dennis is really strong, but we’ll do our best, and then, I’m confident that we can achieve a good result.”

Conditions were still a little wet as Petecof defended his lead at the start against Stanek, who went on the attack. Krütten posted a strong first lap, moving up from fifth to second place within the space of a few turns. However, it was Petecof, who dictated the first few laps of the race by posting a whole series of hot laps, enabling him to pull further and further away from Krütten.

Meanwhile, Norwegian driver Hauger was working his way forwards from the middle of the field, confirming his strong form this weekend. He had qualified in pole position but was given a ten-place grid penalty for twice disregarding red flags during practice. Hauger quickly drove into the points in an effort to make up for what had happened. After several laps, he even overtook rookie driver Aron, who defended gamely.

While Petecof was in a league of his own in P1, Stanek moved into P2 after Krütten locked up. Hauger was still making his charge behind them, and with four minutes left on the clock, left team-mate Krütten with no chance of finding a reply. Petecof secured a comfortable win at the finish line and with it, the lead in the overall standings. Stanek was a clear winner in the Rookie classification.

The second race of the ADAC High-Speed Academy will take place on Sunday morning at 10.05 am. Hauger will be on pole. Race number three is scheduled for Sunday afternoon at 2.40 pm.

Comments from other ADAC Formula 4 drivers

Roman Stanek (Runner-up and best Rookie, US Racing CHRS): “I made an excellent start and was almost surprised to find myself so far in front. I realised that Gianluca was faster, so I let him through and focused on my race. Overall, it was a great race, but there are two more tomorrow, and I aim to push hard again.”

Dennis Hauger (Third, Van Amersfoort Racing): “Overtaking is not easy on this track, which makes me feel even happier to have finished third. The car was great. It would have been a different story, had I been on pole, but I did my best. The race was great, real good fun. Things will be a bit different tomorrow, as I’ll be in pole position, and of course, I intend to convert P1 on the grid into a win.”