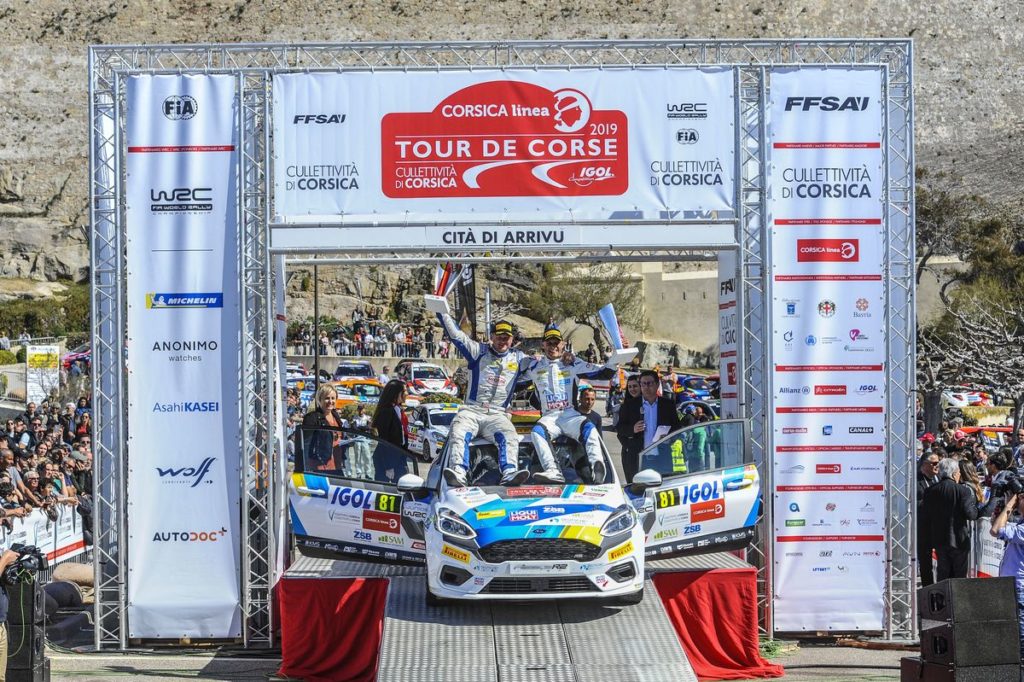 Julius Tannert claimed a nail-biting Junior WRC victory on Tour de Corse as Tom Kristensson maintains his championship lead after a thrilling three-way fight for the lead with Dennis Rådström.

The rally produced four different stage winners with Jan Solans claiming the opening stage on Friday, though a puncture cost him over two minutes on SS2. The Spaniard claimed six stage wins, the most of any Junior WRC driver on Tour de Corse but wasn’t able to close the gap to the leading cars.

Tom Kristensson made an impressive start and, following Solans’s mistake on SS1, led the rally until the very last stage with competitive and mistake-free drives. Tannert posted top-five stage times until a spin on SS7 which put him exactly one minute behind the leader as Kristensson and Solans added to their stage win totals.

Tannert’s comeback started on SS8 where he posted the second fastest time and closed the gap to leader Kristensson. Claiming his first stage win of the season, Tannert put in an incredible drive on SS9 – the longest stage of the rally. He was narrowly ahead of Rådström on the split times throughout the stage and increased his lead by over 19.7 seconds in the last 14 kilometres!

The intensity was building in the fight for Junior WRC victory as Kristensson maintained his steady and mistake-free pace while Rådström claimed his first stage win of the rally on SS10.

After SS11, a fired-up Rådström and determined Tannert slashed Kristensson’s lead to 0.4 and 6.6 seconds respectively. After the cancellation of SS12, the Junior WRC was setup for a nail-biting final day of action on Tour de Corse.

Tannert delivered a stage win on SS13, leap-frogging Rådström, to move into second with Kristensson leading the German by 4.3 seconds. Rådström pushed too hard on SS13 and lost ground to Kristensson with a new gap of 15.5 seconds.

As Kristensson started SS14, it looked like he might have done enough to hold onto victory, Tannert began chipping away the Swede’s lead. The German pushed on and ended the stage 6.1 seconds faster than Kristensson to take FIA Junior WRC Tour de Corse victory by just 1.9 seconds.

“This rally has been fantastic to watch unfold with some really close battles and a healthy variety of stage winners. Huge congratulations to Julius on such a well-deserved result, especially after staging such a determined comeback after stage seven. Tom [Kristensson] and Dennis [Radstrom] should be really proud of themselves too, it’s not easy to fight for any rally lead and to do that without mistakes on Tour de Corse is a real achievement.”

1. Julius Tannert / Jürgen Heigl 3h51m50.0s
“Just an amazing feeling to be honest, it’s like a dream come true for me. It’s just a brilliant result with such a tough fight. Big thanks to Dennis and Tom for such a competitive and hard fight, it was really great to do this in Junior WRC. We lost one minute on Saturday morning and thought everything was over but we didn’t give up and gave everything on the last stage.”

2. Tom Kristensson / Henrik Appelskog + 00:01.9
“I am extremely happy with my results and really proud of how I am handling it because it’s a really strange and intense situation. There were a lot of things to take care of to finish this rally which is our main objective.”

3. Dennis Rådström / Johan Johansson + 00:25.8
“We’re really happy with the result, we did a really great job with great pace notes and important points for the championship. It was a really great fight and a great feeling to get a stage win on tarmac too.”

4. Jan Solans / Mauro Barreiro + 05:48.8
“The overall result is disappointing for me. I wanted to get a podium on this event but we were not able to. We did show our speed though and we have the most stage wins of the rally which is something to be really proud of.”

5. Tom Williams / Phil Hall + 06:36.7
“Really good event but it was so demanding, it was one the longest events that I have done in a while. I’m really happy, it was such a good weekend for us both learning wise and with our pace. There was so much to take in and it was really demanding for the co-driver too.”

6. Roland Poom / Ken Jarveoja + 07:35.3
“I think the feeling was good, especially after the last stage it was really fun. We had some problems, three punctures, but I think we built up our pace across the rally and I after today I can say that our pace was good. I’m really looking forward to the next Tour de Corse.”

7. Raul Badiu / Gabriel Lazar + 08:00.3
“It was good because we finished, we had our ups with some top-three stage times and downs with some issues on the narrow stages. I was learning a lot here, it was like a new sport for me! I’m looking forward to the next event!”

8. Enrico Oldrati / Elia de Guio + 08:30.5
“It was not easy but I really enjoyed it. In the end I’m really happy and quite positive. I finished the rally which is the main thing as this one is tough!”

9. Nico Knacker / Michael Wenzel + 09:36.9
“This rally was really hard for me but we learned so much. The pace notes were not the best on the rally but now I know what to change for future rallies. We have learned so much though which is the main thing.”