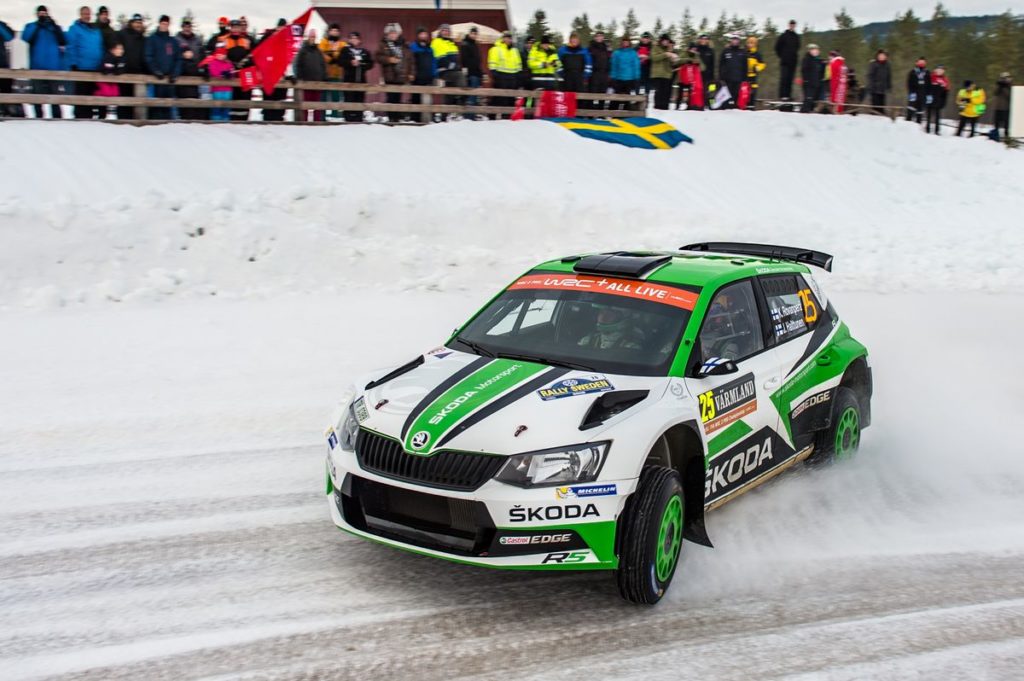 Škoda works crew Kalle Rovanperä/Jonne Halttunen (FIN/FIN) experienced mixed emotions during their very first participation in Rally Sweden (14/02/–17/02/2019). At the second round of the FIA World Rally Championship, they lost all chances of a possible category victory as they had to pay greenhorns’ tax for two time-consuming visits to snowbanks. Nevertheless, despite their lack of experience of the fast snow tracks in the Swedish and Norwegian forests, they scored valuable points for second place in WRC 2 Pro. They are also currently second overall in the category standings. Their Finnish compatriots Eerik Pietarinen/Juhana Raitanen had even more of bad luck. They hit a stone during the last stage and had to retire from fourth position with a broken rim.

Rally Sweden provided the most difficult weather and road conditions since years. One week before the event, everything seemed to be perfect. Snow and sub-zero temperatures created a winter wonderland with a solid layer of ice on the fast and winding forest tracks in the Swedish and Norwegian forests. But during the days before the start, it was getting warmer turning the surface in some places into gravel roads with melting slushy snow and deep ruts. That effected proceedings especially during the respective second run of the stages.

Škoda works driver Kalle Rovanperä and co-driver Jonne Halttunen started well into the rally, scoring the fastest time on the second stage and taking the lead in the WRC 2 Pro category. But one stage later, the Škoda Fabia R5 spun into a snow bank and needed the help from spectators to get back onto the road again. However, their race to catch up brought them back to second place in the category already until Friday evening. Fellow Finns Eerik Pietarinen/Juhana Raitanen, having rolled their Škoda Fabia R5 on the same stage, escaped to fourth after the Friday leg.

On Saturday, Kalle Rovanperä was setting three fastest times in WRC 2 Pro and reduced the gap to category leader Mads Østberg by more than 18 seconds to 1:12.7 minutes. Eerik Pietarinen, who had been nominated by Škoda Motorsport to score WRC 2 Pro manufacturer points, was still fourth, 2:03 Minutes adrift of third placed Gus Greensmith. After the midday service halt, Kalle Rovanperä set another fastest time but one stage later, he ran out of luck and off the road. Another visit to a snow bank costed him 2:48 minutes in relation to the fastest WRC 2 Pro stage time of Škoda team mate Eerik Pietarinen. For Rovanperä the fight for the category victory was over and from then on it was all about bringing the car back to the finish to secure valuable points for second place in the WRC 2 Pro category. During the remaining three stages of the day, he set all fastest times in the category.

The Sunday finally brought back best winter conditions for the remaining three stages, and Kalle Rovanperä set two more fastest times in the WRC 2 pro category. “I am trying to take it easy and avoid mistakes,” was his comment. In total Rovanperä set 14 fastest times in the WRC 2 Pro category. Without the time-consuming visits to snow banks, a category victory could have been possible on his first appearance at Rally Sweden. Nevertheless, despite their lack of experience of the fast snow tracks in the Swedish and Norwegian Forests, they scored valuable points for the second place in WRC 2 Pro. Also, they are currently second overall in the interim category standings. Eerik Pietarinen and co-driver Juhana Raitanen had more bad luck and hit a stone during the last special stage. They had to retire from fourth with a broken rim.

Škoda Motorsport boss Michal Hrabánek commented: “I am satisfied with Kalle’s performance. He has been at Rally Sweden for the very first time and showed again his potential against much more experienced competitors.”