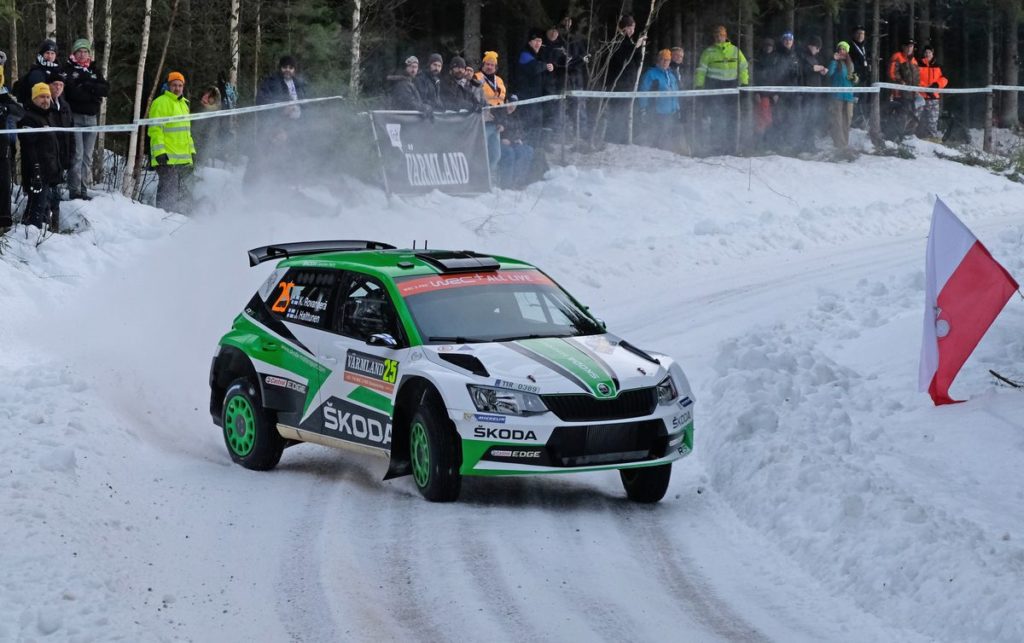 At Rally Sweden (14/02/–17/02/2019), second round of the 2019 FIA World Rally Championship, Finnish Škoda works crew Kalle Rovanperä and co-driver Jonne Halttunen recovered from an off road-excursion with their Škoda Fabia R5 and moved up to second position again in the interim classification of WRC 2 Pro category. Their compatriots Eerik Pietarinen/Juhana Raitanen were hit by bad luck on Friday morning as well, but proved their talent with a string of quick stage times during the afternoon leg.

As a tradition, a short stage on the spectacular trotting horse race track in Karlstad was opener for Rally Sweden, second round of the 2019 FIA World Rally Championship, on Thursday evening. Eerik Pietarinen, nominated by Škoda Motorsport to score points for the new WRC 2 Pro category, set the first fastest time which gave him and co-driver Juhana Raitanen the category lead before the overnight rest halt. Škoda works driver Kalle Rovanperä and co-driver Jonne Halttunen set the third quickest time on the stage, which was covered with melting snow and deep ruts.

On Friday morning, the crews were heading for the fast and winding forest roads of Norway. Rovanperä was quickest out of the box and took the lead despite confessing he needs more confidence in the setup of his Škoda Fabia R5. One stage later, the young Finn totally lost his confidence plus control over his car, spun into a snow bank and needed the help of spectators to get back on track. He was 2:22 minutes down on the fastest time of the WRC 2 Pro category. “I don’t like to drive like I do at the moment. My mistake – that’s it,” he commented. Disaster hit Eerik Pietarinen even worse, he went into a snowbank, got back on the road again – but rolled in the last corner of the third special stage. While Rovanperä recovered into a fast rhythm and equal with Citroën driver Mads Østberg set the fastest time in the WRC 2 Pro category, Pietarinen managed to get through the stage without windscreen and made it to the midday service halt in Torsby.

After the service halt, the crews faced the repetition of the three morning stages plus one special stage close to the service park in Torsby. “Now we start from the beginning again,” Kalle Rovanperä looked back on his unlucky Friday morning and started a race to catch up with his Škoda Fabia R5. Rising temperatures converted the snow into gravel tracks, and Rovanperä eventually set five fastest WRC 2 Pro times on the seven stages of the rally’s Friday leg.

“My driving was much better in the afternoon, but these conditions are really hard. I never drove with studded tires on roads like this with so much gravel, it is really hard to find the right balance”, he said at the end of the day.

At Rally Sweden, the crews are facing 19 special stages, covering in total nearly 320 kilometres on the remote forest tracks of Sweden and Norway. The rally finishes on Sunday (17 February) with the final Power Stage close to the service park in Torsby, the winners are expected on the podium around 13h00.

Number of the day: 29
29 crews using a R5 car – amongst them 16 Škoda Fabia R5 – started Rally Sweden, which clearly proves the success of this category.