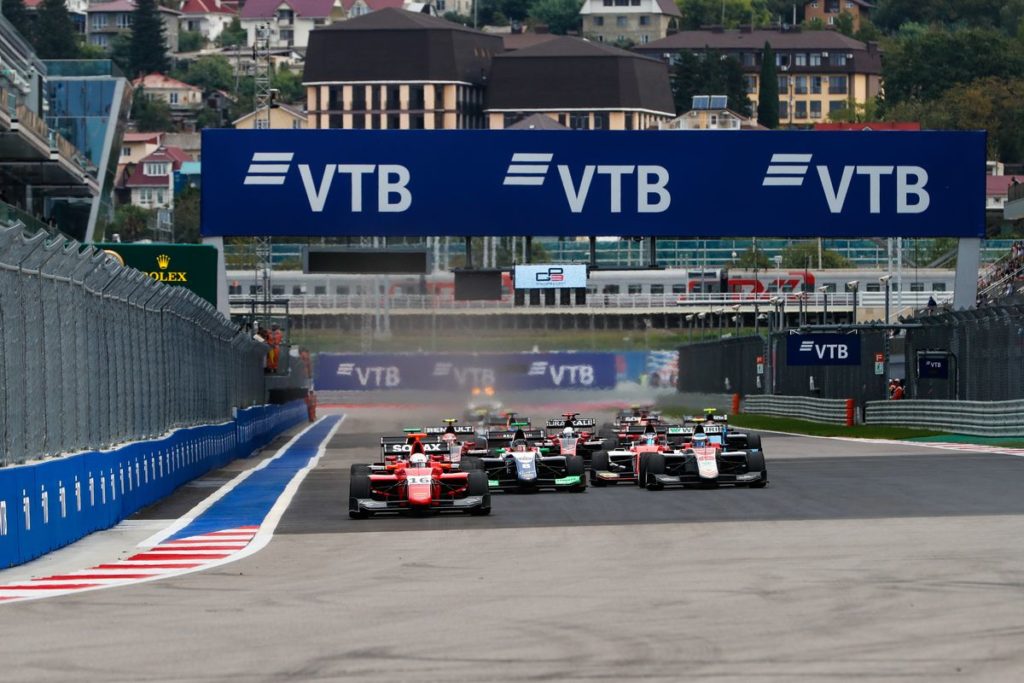 David Beckmann stole victory on the final lap of the GP3 Series Race 2 at Sochi, Russia, diving past Joey Mawson in the dying stages of the race to clinch his third win of the season. The Trident driver made a successful play for the lead into turn 13 before the chequered flag, relegating Arden International’s Mawson to second place as Richard Verschoor of MP Motorsport was close behind to secure his first GP3 podium.
At the start, Mawson made a perfect start from pole position to sweep across the path of fellow front-row starter Jake Hughes, while Simo Laaksonen spilled into second place at turn 2 as the British driver fell back through the order – watching Beckmann and Verschoor occupy the top four. Laaksonen, who had taken evasive action at the second corner through using the run-off – had his luck run dry on the following lap as Beckmann and Verschoor blitzed past the Finn, whose chances of a good result ended after being tapped into a spin by Anthoine Hubert.
Hubert endured an inauspicious set of corners afterwards, as ART teammate Nikita Mazepin cruised past on the following lap with DRS to assume fourth place. Mawson continued to lead, but Beckmann began to eat into the Australian’s advantage to bring himself within DRS range – getting to within half a second before the midway point of the race. Meanwhile, battles raged on through the field – Juan Manuel Correa and Gabriel Aubry were embroiled in a duel in the lower reaches of the points, and Correa came out on top with a solid move into turn 13.
Mawson then came under heavy pressure from Beckmann, but displayed his uncompromising defensive skills to keep the German driver at bay. With two consecutive laps of using his DRS allocation, Beckmann was unable to find a way through and instead elected to be more circumspect on his following tours of the circuit – keeping out of range from Mawson. Verschoor kept the duo honest, along with the chasing Mazepin.
With five laps to go, the field began to push a little harder, although Beckmann struggled to return to within a second of Mawson. At the same time, Hubert had found an edge over Mazepin and began to catch up to the Russian with three laps to go. Under pressure, Mazepin locked up at turn 13 and caught the wall attempting to return to the track, crashing out in front of his home supporters and bringing out a virtual safety car.
After Mazepin’s car was cleared from the line of fire, full speed running began once more for the final lap – where Beckmann had caught right up to the back of Mawson. Unable to make the difference into turn 2, Beckmann’s pace advantage was obvious and continued to hound the Arden driver until the final corners, diving past with DRS assistance into turn 13 and clinching victory on the final lap. Verschoor tried to follow through, but Mawson was unwilling to give up any further positions and held onto second.
Hubert claimed fourth after Mazepin’s retirement as Correa took fifth. Aubry managed his best finish of the season with sixth, as Tatiana Calderon ended the race seventh – beating Race 1 winner Leonardo Pulcini who completed the scorers.
With 199 points, Hubert now sits 32 points clear of Mazepin in the drivers’ standings, while Callum Ilott drops out of the championship battle a further 20 points behind. ART Grand Prix sewed up the teams’ championship in yesterday’s race, as Trident are 161 points behind them, with Campos Racing remaining third.
2018 GP3 Series Round 8 – Sochi, Russia – Race 2 Provisional Classification
Overall fastest lap: Jake Hughes (ART Grand Prix) – 1:55.087