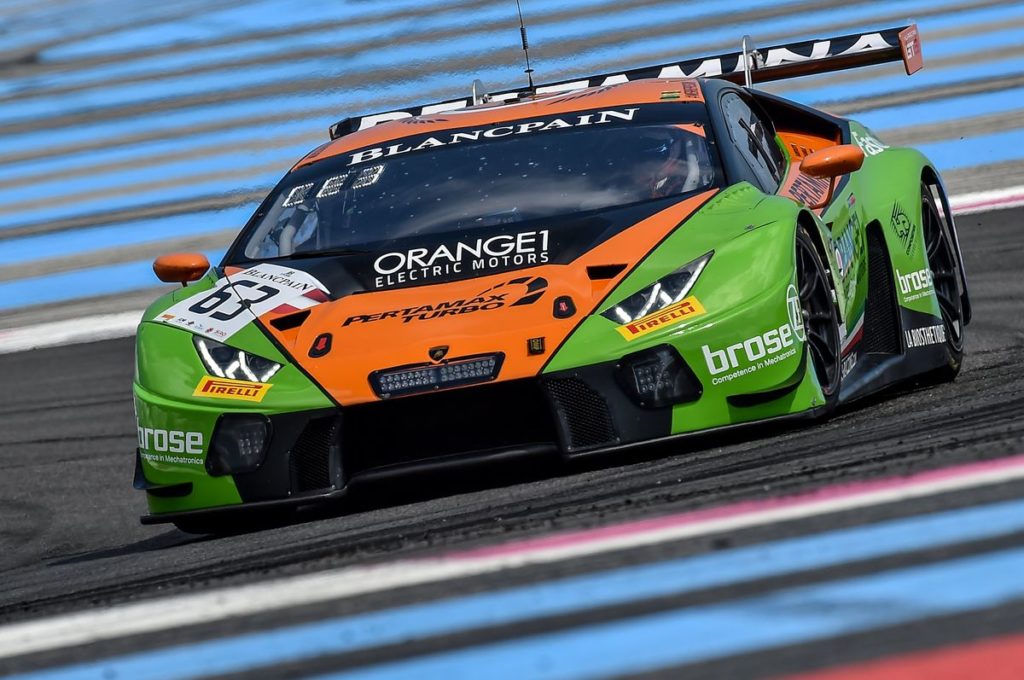 The third round of the Blancpain Endurance Series GT Cup was held at the Paul Ricard Circuit in the south of France this Saturday. For the GRT Grasser Racing Team this was an important race and it was also meant to be a great way to prepare for the upcoming highlight of the championship, the Spa 24 Hours race.
Mirko Bortolotti, Christian Engelhart and Andrea Caldarelli again teamed up in the #63 Lamborghini Huracán GT3 and under sunny skies at Paul Ricard the trio worked through an extensive programme to ready themselves for the race. Bortolotti started the race from 6th and moved up to 4th, showing clear intentions from the start.
Our experienced crew concentrated on banging in consistent lap times, taking advice from the pit wall and choosing the optimum time to make the driver switches. The #63 raced as hard as they could into the night and were ready to take advantage of any mistakes that the cars ahead could make. However, it looked like 13th was all that was on offer after 1,000km this evening.
Starting from 26th on the grid certainly made life a bit harder than it could have been for the #19, at the end of six hours of exciting racing, Marco Mapelli, Ezequiel Perez Companc and Raffaele Giammaria completed a recovery by having fought their way up to P17 at the chequered flag. Which was a great result, displaying the cars performance right until the end.
However, it was a different story for the #82 car, which faced a tough challenge this weekend. There were problems with the engine and then with the car underfloor during the race which meant Rolf Ineichen, Franck Perera and Phil Keen had lost about an hour in the boxes, trying to fix the problems. With only limited time on track, the guys battled their way through, but P39 was the best result possible at Circuit Paul Ricard.
It was a frustrating end to this 6h race, held in unusually hot conditions, but the GRT team can be happy for the overall teamwork, especially during pit-stops. The GRT Grasser Team drivers gave their maximum, but now it’s time to prepare for the Belgian classic, the Total 24 Hours of Spa, which takes place from 26 to 29 July, with a pre-race test day on 3 July at the daunting road circuit.

Mirko Bortolotti: “We had a good start and I moved up two places from lights out. We were running P5 with a great performance from the whole team. Unfortunately, we started to struggle and couldn’t get the result we wanted, as well as finish in the points. Obviously, I’m not very happy and a bit disappointed, but we’ll continue to work hard and we believe we will be stronger during the rest of the season”.

Christian Engelhart: “It was a tough weekend for us. We had a good Qualifying result and the car was perfect. We also had a quite good starting position for the race and we didn’t make any mistakes during the whole race and pushed really hard. Unfortunately, in the end we were not just quick in the night”.

Andrea Caldarelli: “It was a tough weekend and not the result we were expecting. I think we did a good job in Quali, bringing the #63 car to P6. In my Q3 I felt like I did a very good lap and car performance was very good. Unfortunately, I struggled a little bit in a traffic and lost some time, which is normal, but I think P3 was also possible. In the race, we had strong pace and I was very happy with my two stint’s but we went back down to P5. Unluckily after we faced another problem with the car and we dropped down a bit further. I’m a bit disappointed, because I think P5 was possible today. Now we are fully focus to Spa”.

Rolf Ineichen: “It was a very difficult weekend. It’s like we used the race as a test to prepare for the next endurance race, which is a pity. However, this is racing and it is how it is, so we are looking forward for the next weekend and we will keep pushing”.

Phil Keen: “Today is a disappointing day. I think the team worked very hard and did a great job. Unfortunately, we had a few problems during the race, so we had to stop and repair the car. But I think we made good progress and I’m looking forward to Spa.”

Ezequiel Perez Companc: “The race was tough for us. I did a double stint at first and then we had a problem with pressure. It was difficult because in the beginning we thought that the tyres pressure would go up but they stayed really low so we struggled a lot with the car. In the second stint, we thought that we could improve and show better result, but still the tyre pressure was low. Clearly it was a disappointing race for us.”

Raffaele Giammaria: “That was not the race we wanted today. We started from P26 and finished P17, which is good. We did a good job, because there were not any mistakes from the drivers, all the pit stops were normal too. In general, the pace wasn’t particularly fast, but the consistency was one of the key points for us and for this reason we were able to recover a lot of positions. For the next race it’s very important to be fast because we have to improve the speed in the car. The drivers, team and the mechanics didn’t make any mistakes, which is very important for the long race that awaits, especially when you think about Spa 24h.

Marco Mapelli: “It was a difficult race. We didn’t have good pace at all, so we basically just cruised around and tried to take car back home without any damage to it. Obviously, it was not the spirit we usually have at the race but I’m sure that the team will understand what was wrong with the car, collect all information and prepare a good car for the next race”.

Gottfried Grasser, the Team Owner: “Today things didn’t really work out for us and it was the maximum we could do from a tough weekend overall. All three cars were good, however, the situation was similar to Silverstone, where we faced a lot of small problems. Generally, it was a good race. I’m really proud of the crew. This race is always a preparation for 24h of Spa and the guys did good pit stops, whilst our drivers did not make any mistakes, considering the fact that one of the target after Silverstone was to improve our pit stops, and they did a great job. I’m pleased for the whole team, which did a brilliant job.”

0 0 0 0 0
Previous : BMW one-two-three in eventful Sunday race at the Hungaroring
Next : BMW makes its return to Le Mans as the BMW M8 GTE completes the official test day