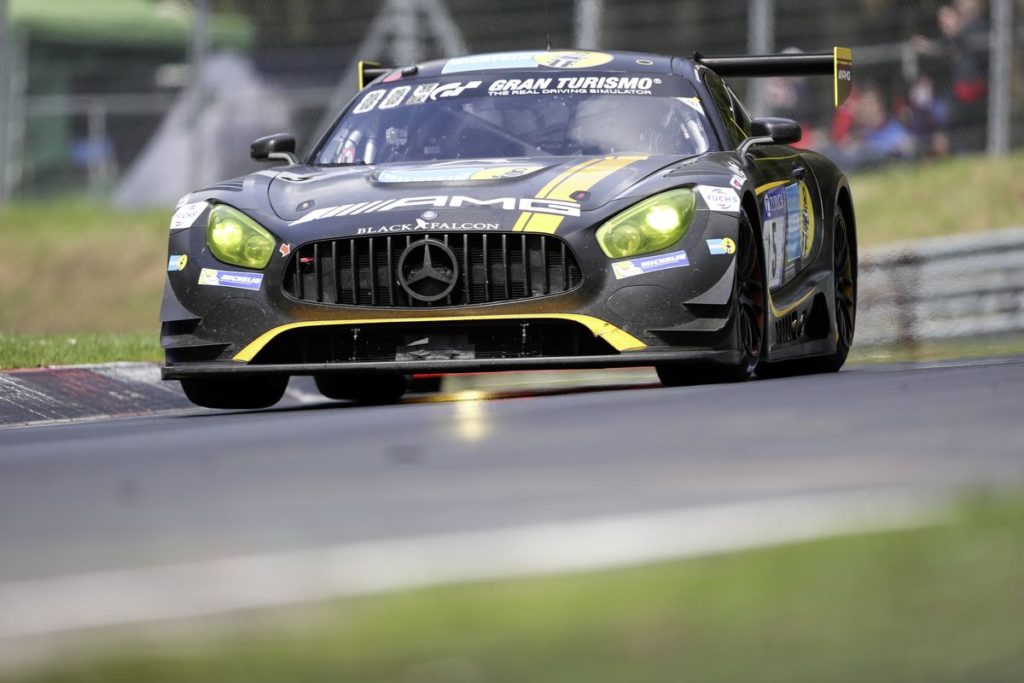 Sunday’s six-hour qualification race was full of tension and overtaking manoeuvres right through to the finish, with both the #5 and the #47 Mercedes-AMG GT3 playing starring roles. The #5 Mercedes-AMG Team BLACK FALCON car, with drivers Yelmer Buurman (NED), Thomas Jäger and Jan Seyffarth (all GER), started from fifth place but wasted little time in joining the battle at the head of the field. The trio moved into the lead for the first time after just ten laps. The excitement increased going into the dying laps, with Buurman retaking the lead when the first-placed car came into the pits. With a lead of just six seconds, the final driver was then involved in a two-car battle for the win. Buurman negotiated traffic better on the final lap and was able to fend off the attacks of his rival. After 41 laps of racing, he crossed the finish line first in the #5 Mercedes-AMG GT3.

The #47 Mercedes-AMG GT3, run by Mercedes-AMG Team MANN-FILTER, also produced an impressive performance in a thrilling race in the Eifel region of Germany. Dominik Baumann (AUT), Christian Hohenadel (GER), Daniel Juncadella (ESP) and Edoardo Mortara (ITA) did not get the Top-30 Qualifying result they had hoped for, but fought back strongly from eleventh on the grid. The quartet launched their fightback on the opening lap, before Baumann demonstrated all his skill in the final stages of the race. The quartet gradually worked their way into fourth place, before the Austrian pulled off an impressive overtaking manoeuvre to secure third place with ten minutes remaining. Two laps from the end of the race, Baumann pulled level with his rival under braking at the end of the start-finish straight and proceeded to pull ahead in the next corner. He then hung on to third place to claim a second spot on the podium for Mercedes-AMG Motorsport.

The Mercedes-AMG GT4 also enjoyed a successful conclusion to its test programme ahead of the 24-hour race: The #66 BLACK FALCON Team IDENTICA was fourth in the SP10 class, ahead of the #74 Team Mathol Racing e.V. in fifth.

The fifth staging of the prologue to the ADAC Zurich 24h Race offered the perfect opportunity for the teams to perform final adjustments to their cars. A free practice, two qualifying sessions, Top-30 Qualifying and the six-hour race itself allowed the teams to test extensively and successfully ahead of the highlight – the 24-hour race in May. The Mercedes-AMG GT3 cut a fine figure throughout the 24-kilometre Nürburgring-Nordschleife. The close team result of the four GT3 cars from Affalterbach underlines the outstanding work within the Mercedes-AMG teams. This year’s ADAC Zurich 24h Race takes place from 10 to 13 May.

Yelmer Buurman, Mercedes-AMG Team BLACK FALCON #5: “The start was really good. The track was already completely dry and I was able to make up a few positions early on. The last two laps were then really hard work. I had the BMW in my mirror and traffic ahead of me. This time I was a little fortunate and was able to pass the slower cars without any difficulty. That gave me a big enough lead on the Döttinger Höhe. I am super happy that we won today. I would like to thank everyone. That was a great effort from the whole team.”

Dominik Baumann, Mercedes-AMG Team MANN-FILTER #47: “The Audi in front of me was a little unlucky with traffic on my final stint. That allowed me to close in on him again. We then had a really nice battle for third place. I was able to pull alongside him at the end of the start-finish straight with two laps remaining. He gave me enough room and I passed him in the next turn. I was able to hold on to third place on the final lap. That was great fun and we are obviously very happy – with the result, and with the Mercedes-AMG GT3, which the team had set up perfectly and was very good to drive.”

Daniel Juncadella, Mercedes-AMG Team MANN-FILTER #47: “I had a lot of fun this weekend. That is the first time I have driven on the Nordschleife this year. We did not have the best starting position today, which meant that we were delayed a little in traffic at the start of the race. I obviously hope that we can do even better in the 24-hour race, but the Mercedes-AMG GT3 ran very well. We can be very happy with today’s third place and are well prepared for the 24-hour race.”

Maro Engel, Mercedes-AMG Team BLACK FALCON #4: “ Unfortunately, we were unlucky with a Code 60 phase in the Top-30 Qualifying. That is why we had to start from down in P14. It was fun to drive at the start. There were a lot of battles for position, but that obviously held us up a bit. In the end, we are not entirely happy with the result. However, we were able to gain a lot of data again in the run-up to the 24-hour race. Congratulations to the two Mercedes-AMG teams on victory and third place.”

Hubert Haupt, BLACK FALCON #6: “We started from 12th. My start was good, without any issues. The times were very good and I was able to match the pace of the other cars, including the Mercedes-AMG GT3. Unfortunately, Abdulaziz then had a slight contact with another car, which meant we had to come in for an unscheduled stop. That dropped us down the field a little, and the final result did not really reflect our performance. Given the times and performance, I am happy with the final test and looking forward to the 24-hour race in May.”

Stefan Wendl, head of Mercedes-AMG Customer Racing: “We saw some really good racing today. We drove at the limit today and it was a really tough battle for the win and the podium positions. The standard of the various manufacturers is really high. That makes it all the nicer to not only take the win and third place today, but also another two top-ten finishes. A big compliment goes to all the teams and drivers for their performance in this hard-fought race. However, we cannot afford to relax now. We have to precisely analyse today’s data. Then we must prepare the cars perfectly again before we return to the Nürburgring for the 24-hour race.”


* excerpt, subject to confirmation by the organiser