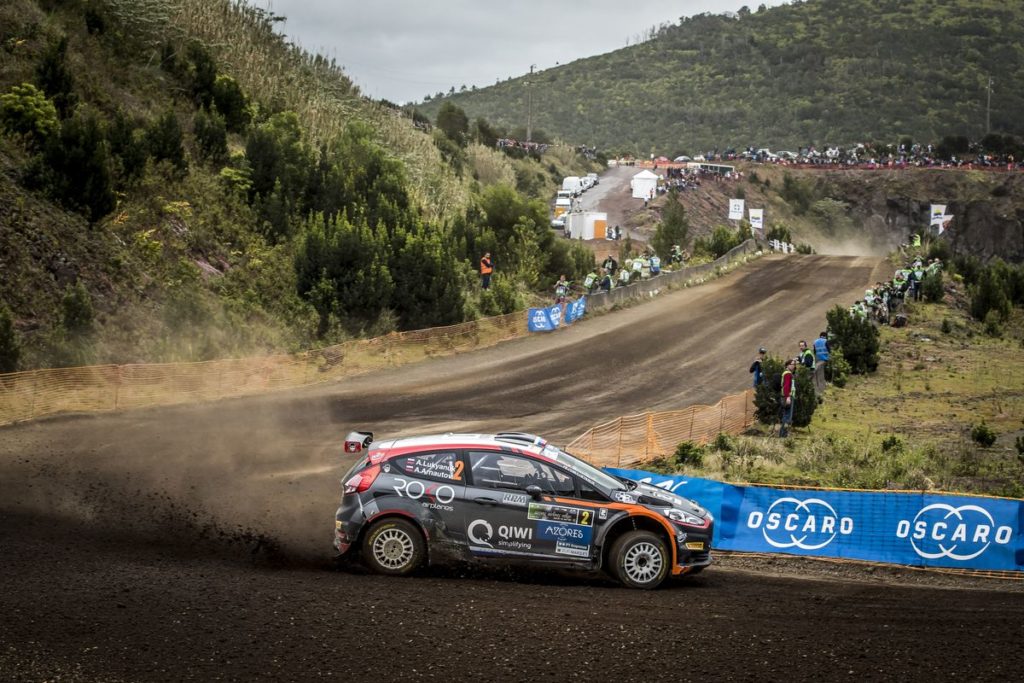 Alexey Lukyanuk laid down an emphatic marker for his ERC rivals to aim for, leading the Azores Airlines Rallye from Thursday afternoon all the way through to Saturday’s final stage, and capping his wining start to this year’s FIA European Rally Championship with donuts before the finish line.

Portuguese drivers Ricardo Moura and Bruno Magalhães gave their all, but had no answer for Lukyanuk’s rapid pace, while while fellow Pirelli-equipped Chris Ingram was one of a number of ERC Junior Under 28 stars to excel on the demanding gravel spectacular with a class win on his step up to R5 as the ERC Junior Under 27 champion.

Martin Koči had been leading ERC Junior U28 up until the penultimate stage on his Azores debut but the ŠKODA Slovakia Motorsport driver would retire six kilometres from the start of the final run, ripping off the front-left wheel of his Fabia R5.

Juan Carlos Alonso mounted an incredible comeback to win ERC2, recovering from a broken fuel pump on Thursday to make up three minutes and beat Sergei Remennik to victory after the Russian lost time with a time-consuming spin in Tronqueira on Saturday morning.

Moura went all out attack in his attempts to reel in the rapidly escaping Lukyanuk, but his push went slightly too far when he clobbered a bank and spun his Fabia R5 on the first run through Tronqueira. Behind, Bruno Magalhães started the day in third and within touching distance of the leading pair, but a broken rear differential cost him more than half a minute and ruined his chances of a second successive victory on home soil by midday service in São Miguel’s capital Ponta Delgada.

Lukyanuk took a steady approach to the final loop of stages, conserving his Pirelli tyres and trying not to make any mistakes. Moura’s pace faded somewhat in the afternoon, dropping to 47.9 seconds off first place before leg two’s final stage.

Russian Performance Motorsport’s lead driver then set hearts racing with only a few hundred metres of Tronqueira’s second pass remaining, Lukyanuk pulling wide to celebrate his impending victory with donuts. His showmanship cost some 30 seconds, but with nearly one minute in hand, entertaining the thousands of fans made no difference to the standings, sealing victory by 16.4s alongside co-driver Alexey Arnautov.

“I was so happy that I made some donuts before the end. Thanks to my team, my sponsors, they all did really great job. We tried to do our best to be clever and it worked,” said Lukyanuk.

Despite selecting what he described as the ‘wrong’ tyre compound, Magalhães pressed on and closed in on Moura ahead, but came 9.3s short of stealing second place away by the finish.

Luis Rego took a fine P11, one place ahead of ŠKODA AUTO Deutschland’s Fabian Kreim. Italian Tamara Molinaro won the ERC Ladies’ Trophy in P14 on her second outing in an R5 car. Brazilian Paulo Nobre took P18 on his international rallying return. Portugal’s Aloísio Monteiro was P22 at the start of his ERC adventure in an R5 car.

ERC Junior Under 28: Ingram shines with debut victory
Chris Ingram capped his FIA European Rally Championship four-wheel-drive debut with a first ERC Junior U28 class victory, retaking the lead on Saturday’s penultimate test from Martin Koči, who would crash out of second place on the closing stage.

Ingram, who follows Marijan Griebel by winning on his ERC Junior U28 debut as ERC Junior U27 champion, had extended his lead to 15.8s after Saturday’s opener, but a puncture through Tronqueira’s first pass sent him straight back into Koči’s clutches. Reigning ERC Junior U27 champion Ingram then went into tyre-saving mode through SS13, ceding first place to Koči. Ingram replied immediately through SS14, regaining the lead and setting up an epic showdown with a slim 4.7s advantage over Koči, whose fantastic efforts came to a hugely frustrating end when he ripped the front-left wheel from his ŠKODA Slovakia Fabia R5 and retired.

“It was my mistake,” said said Koči. “I touched too much in one corner and it ripped the wheel off. I’m sorry for my team, my sponsors, the fans and my family and I’m sad for me.”

Ingram added: “He put so much pressure on us so big respect to Martin. It’s a dream debut for me but I’m gutted not to be on the overall podium. It’s been awesome, I’m learning the car still and I work so hard to do this. I’m really proud for that.”

Fredrik Åhlin inherited second place, a sensible and straightforward approach to his final day wrapping up an ERC Under 28 podium on his Azores debut. Likewise, his CA1 Sport team-mate Rhys Yates scored his first ERC Under 28 podium with third place.

Taking a deliberately cautious approach to preserve points for his Azorean championship campaign, Luis Rego finished fourth, while an impressive Fabian Kreim set the fastest time of anyone in SS13, even beating Russian Rocket Lukyanuk and last year’s winner Bruno Magalhães on his way to fifth in class. Tamara Molinaro was extremely unlucky to pick up punctures on both passes of Tronqueira, but her perseverance was rewarded with sixth place. Behind her were Tomasz Kasperczyk, Laurent Pellier and Pierre-Louis Loubet securing positions seven through to nine respectively. OSCARO-backed Loubet, who like PEUGEOT Rally Academy’s Pellier showed glimpses of what might have been, setting a trio of overall top five stage times on leg two’s afternoon loop. Hubert Ptaszek crashed his ŠKODA Fabia R5 into a farm building on the final stage and got stuck for 20 minutes.

ERC Junior Under 27: Gago streaks clear for Azores win
Diogo Gago put his local knowledge to great use, further extending a 40s lead from Friday to secure FIA ERC Junior U27 victory by over a minute aboard his PEUGEOT 208 R2.

Mārtiņš Sesks had been dueling with Gago for victory on Friday, but come Saturday he was instead looking backwards, fending off Efrén Llarena who had suffered a puncture and lost one minute the day before. A gearbox problem would settle their battle, Sesks losing first and second gear late on during Tronqueira’s rally-ending test and dropping him behind an ecstatic Llarena. “Many thanks to the whole team, to this project of the Rally Team Spain, to the sponsors and to all the fans who from home, and some from here too, have supported us and followed every kilometre. This second place is yours too!” said Llarena.

Gago said: “We did it and I’m so happy with this victory. We work really hard to win here. I’m proud of my team, my sponsors and my co-driver.”

ERC2: Charging Alonso on top
Juan Carlos Alonso turned a 2m53.6s deficit on Thursday evening into ERC2 victory on Saturday, catching and passing all his rivals in a sensational recovery drive. Alonso had been set back by a fuel pump failure on Thursday’s superspecial, but had already climbed to second place and one minute behind ERC2 leader Seregi Remennik by Friday night. Fifteen seconds had already been made up by Alonso in leg two’s opening test, but a spin into a pair of rocks by Remennik expedited Alonso’s charge up the order, giving him a lead he would not relinquish. Luís Pimentel finished third with Menderes Okur fourth. Zelindo Melegari crashed on SS13 after losing time this morning with a broken turbo. Tibor Érdi Jr retired on Thursday with broken suspension.