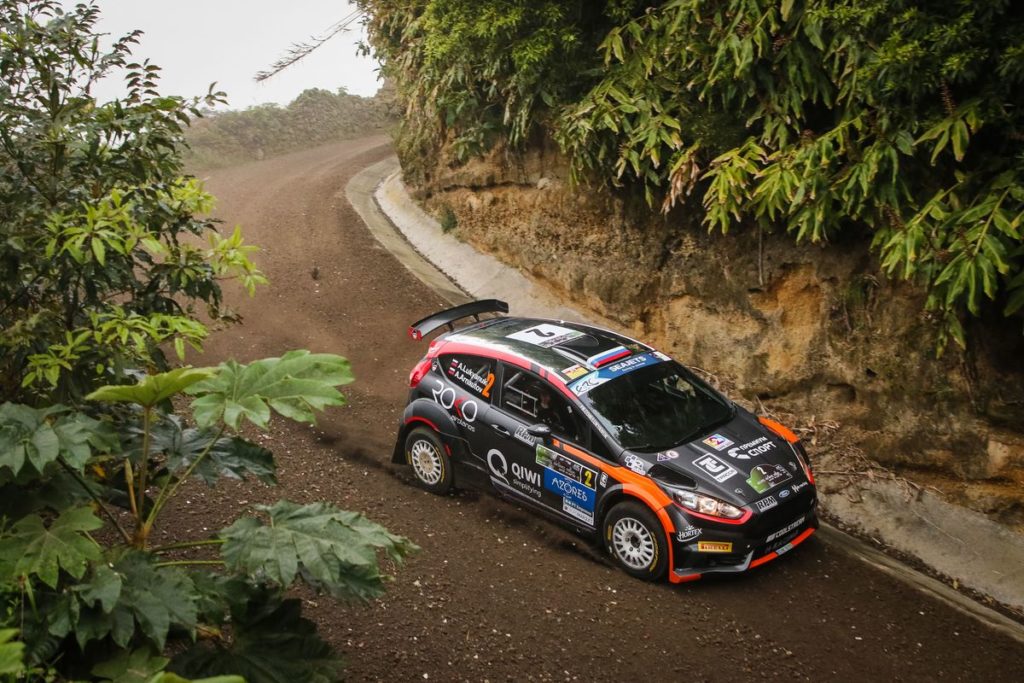 Alexey Lukyanuk has taken a narrow lead on the FIA European Rally Championship’s opening round, edging out Qualifying Stage winner Ricardo Moura despite running wide into a field during a drama-filled second stage of the Azores Airlines Rallye this afternoon.

Vila Franca / São Brás caught out a swathe of drivers including Lukyanuk, yet incredibly Russian Performance Motorsport’s lead driver also went fastest through the 17-kilometre test, even after an overshoot into a field caused by taking too much speed over a jump.

Lukyanuk and Moura were joined in the lead battle by ERC Junior U28 pacesetter Martin Koči. Taking a cautious approach in the opening Lagoa Stage to save tyres, ŠKODA Slovakia-backed Koči charged through the tricky Vila Franca / São Brás test third quickest, joining Lukyanuk and Moura in taking advantage of his road position for a cleaner stage surface.

Ingram suffered a hairy moment on the second stage, losing the rear bumper of his Toksport WRT ŠKODA Fabia R5 after clipping a tree, but was still fourth quickest through Vila Franca / São Brás regardless, impressive for his first event in an R5 car.

Swede Fredrik Åhlin finished the opening trio of stages 0.3 seconds behind Ingram to hold third place in ERC Junior U28 and seventh overall, but suffered a worrying end to his day with an oil pressure warning light flashing on his Fabia R5.

Vila Franca / São Brás was the scene of several early exits, through a mixture of accidents and mechanical failures. Hermann Neubauer crashed out towards the end of the test in the slippery conditions, while Pierre-Louis Loubet retired his OSCARO-backed Hyundai with a technical problem midway through the stage. Laurent Pellier reached the end of the same stage, but then stopped on the following road section with an electrical problem.

Sergei Remennik inherited a 32.1s lead in ERC2 after dominant leader Juan Carlos Alonso suffered a fuel pump failure in the final 3.95-kilometre Grupo Marques superspecial. Alonso turned in a superb performance through the tricky Vila Franca / São Brás stage to put almost 20 seconds between himself and Remennik, only to stall at the Grupp Marques startline and drop almost four minutes trying to restart his Mistubishi Lancer Evo X.

ERC2 champion Tibor Érdi Jr retired after the first stage with broken front right suspension, the Hungarian insisting he had not made contact with anything mid-stage. Menderes Okur and Luís Pimentel run third and fourth, the latter suffering a broken turbo. Alonso completes the top five after his fuel pump issues.

ERC Junior Under 27: Strong start for Sesks
Mārtiņš Sesks made an ideal start to his ADAC Opel Rallye Junior Team debut, moving into first place in both Pirelli-supported ERC Junior U27 and ERC3 during Thursday’s final stage. Rally Team Spain’s Efrén Llarena initially led the ERC Junior U27s, aided by a class stage win in the longest 17 kilometre Vila Franca / São Brás test, but dropped several seconds in the day’s final superspecial and dropped to second place. Diogo Gago, Tom Kristensson and Simon Wagner completed the top five in both ERC Junior U27 and ERC3. Several drivers were caught out by the tricky second stage. Pedro Antunes had been running second in ERC Junior U27 but was forced to stop mid-stage, as was Miika Hokkanen with an engine failure. Dominik Brož suffered a puncture after hitting a stone, dropping to sixth in ERC Junior U27 and ninth in ERC3.

What’s next? Leg one continues on Friday 23 March with the first of two runs through Pico da Pedra Golfe from 10h28 local time. It’s one of six stages included on the schedule, which also includes two visits to the iconic Sete Cidades volcano stage shown live on TV and online from 11h42 and 15h44 respectively. Click here for results: https://www.fiaerc.com/live-timing/.