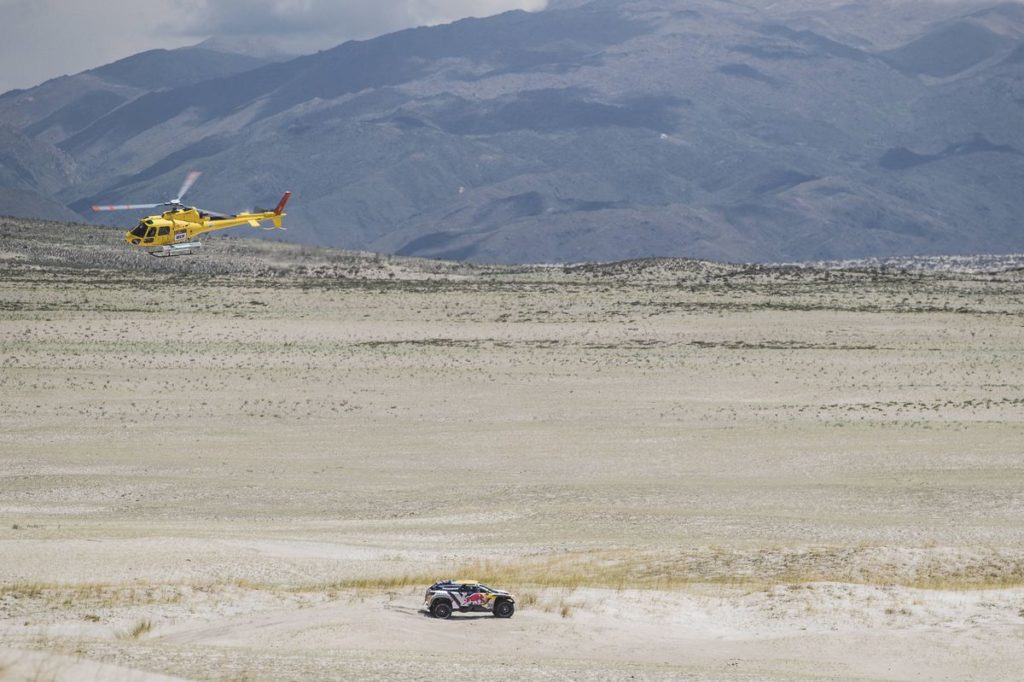 The heat got turned up at the 2018 Dakar Rally on stage 10 with drama in the bike race taking centre stage. On a day when temperatures got up to 43 degrees Celsius the fierce competition in the two-wheel division became too much for some. Keeping his cool out in the dunes today was Matthias Walkner (AUT) as he took a huge step towards winning his first Dakar.

At the start of the day the gap between bike race leader Adrien Van Beveren (FRA) and second placed rider Kevin Benavides (ARG) stood at a mere 22 seconds. After stage 10 things are very different because new leader Walkner has an advantage of nearly 40 minutes over Joan Barreda (ESP), the new owner of the runners-up spot.

“The routes in Argentina are always difficult so I know I have to pay very close attention. Sometimes this means I slow down a little to make sure I’m getting the navigation right.” – Matthias Walkner

Red Bull KTM Factory Team rider Walkner gained his overall lead thanks to some sure footed navigation on the stage between Salta and Belén. Walkner and Van Beveren were the only riders to pick the right path with frontrunners Benavides and Barreda plus KTM riders Toby Price (AUS) and Antoine Méo (FRA) all taking a wrong turn.

“We all made a mistake and we couldn’t get back on track. Eventually the helicopter came to direct us back to the start. We lost lots of time today and a chance to win, but that is the Dakar. At least we came back safe.” – Antoine Méo

It looked like the day’s events would leave Van Beveren in the overall lead with Walkner promoted to second and then a significant gap to the third place rider. Then, just 3 kilometres from the end of the stage, Van Beveren suffered a heavy crash that ended his race. Walkner went on to win the stage, take over top spot in the general classification and become a firm favourite to win his first Dakar title.

After a tricky start to today’s stage which included a crash, things turned around for Laia Sanz (ESP) with 11th place on the stage promoting her to 15th overall.

“In the second part of the stage I did all the navigation well so it was not a completely bad day after my crash.” – Laia Sanz

There was a 41st stage win of Stéphane Peterhansel’s (FRA) Dakar career in the car category as he set the fastest time for the second consecutive day.

“We chose our moments to push, always aware of trying to avoid mistakes.” – Stéphane Peterhansel

“I think this is one of the toughest Dakars we have done in South America for sure. The days are long, we’re finishing the stage at 20 to seven and have been on the road since 6am this morning.” – Giniel de Villiers

“At this moment everything is OK. The plan for tomorrow is to go nice and steady like we did today with no major issues.” – Carlos Sainz

There was a nice display of teamwork from Cyril Despres (FRA) who waited for fellow Team Peugeot Total member Sainz at the start of today’s stage. Despres then stayed close to Sainz just in case his help was required during the 373 kilometres of timed special stage.

“Carlos was really fast at the end so we had to let him go after following him all day. On those big, dry rivers Carlos is really, really fast.” – Cyril Despres

Another third place stage position takes quad biker Ignacio Casale (CHI) a step closer to regaining the title he won in 2014. The Chilean quad biker leads his category by close to two hours with four days of racing still ahead.

Truck race leader Eduard Nikolaev (RUS) conceded some time to second placed Federico Villagera (ARG) today, but still has a firm grip on the contest. Team Kamaz Master trucker Nikolaev will benefit from a starting position on tomorrow’s stage that will help him claw back those minutes lost on stage 10 should he wish to push.

As if the bike race hasn’t been tough enough already this year, tomorrow is the start of another marathon stage for competitors on the two wheels. Stage 11 itself is the Dakar route which has become affectionately known as ‘Super Fiambalá’ in recent years. Expect plenty more plot twists in the full glare of sun as we wind our way through Argentina.

0 0 0 0 0
Previous : Dakar Rally gets into gear for decisive final stages in Argentina
Next : TCR Middle East kicks off with two events in the Emirates