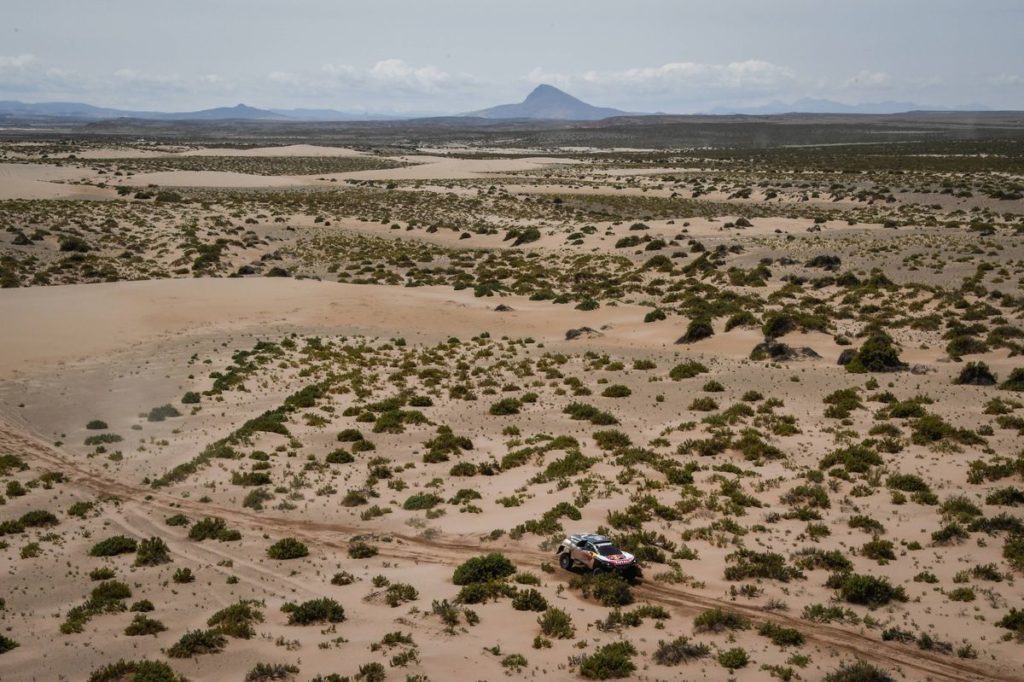 The was a pause in proceedings at the 2018 Dakar Rally as stage nine fell victim to torrential rain in Bolivia. Instead of racing against the clock to Salta the entire Dakar convoy travelled on the assistance route. Now the race has arrived in Argentina where it will conclude after five more days of fierce competition.

While there was little change to the leaderboards today, there was time for title hopefuls to come up with attacking tactics. The bike race remains extremely close and Dakar veteran Hélder Rodrigues (POR) has been enjoying the show so far. The two-time bike race podium finisher believes that the contest is currently wide open.

“My experience of these next stages in Argentina tell me that the race is yet to decided. We have six riders who all have the chance to win this year. It’s a great race.” – Hélder Rodrigues

With five stages remaining the Top 6 bikers are locked together with Adrien Van Beveren (FRA) in first, just 22 seconds ahead of second place Kevin Benavides (ARG). Then Matthias Walkner (AUT) in third is 6m34s off the lead with KTM team-mate Toby Price (AUS) a further minute back. Joan Barreda (ESP) is fifth overall, eight minutes behind Van Beveren and less than two minutes ahead of Red Bull KTM Factory Team rider Antoine Méo (FRA) in sixth.

“I’m looking forward to racing in Argentina because in previous years it has served up some difficult stages. There’s still a very long way to go.” – Toby Price

Things may not be so tight in the car, truck and quad categories at the very front but there’s plenty of moving and shaking yet to be done here as well. Team Peugeot Total driver Carlos Sainz (ESP) is in pole position to regain the Dakar title he won in 2010. Sainz still holds a healthy advantage over the chasing pack, despite being hit with a 10-minute penalty for an incident involving a quad biker.

“I’m not happy about the time penalty because I do not think it reflects the reality of the situation. What happened was that I acted fast to avoid an accident.” – Carlos Sainz

In the truck division we find Team Kamaz Master on course for their eight victory since the Dakar moved to the South American continent 10 years ago. Leading the charge for the Russian truckers is Eduard Nikolaev (RUS) who holds first place by over 45 minutes. What will be reassuring for Nikolaev ahead of the remaining stages is having team-mates Dmitry Sotnikov (RUS), Ayrat Mardeev (RUS) and Anton Shibalov (RUS) all in close attendance should he need their assistance at any point.

“The most important thing is that our truck is in good condition and the crew is OK. It is clear that a lot of fight is ahead.” – Eduard Nikolaev

And finally the quads, where Ignacio Casale (CHI) could make history by holding the lead in his category from beginning to end. Since winning the opening stage the Chilean quad biker has maintained top spot and is currently 1h45m20s clear of his nearest rival.

After the enforced stoppage the racing returns tomorrow and it’s back to the dunes for a gruelling 373 kilometres of timed special stage. There’s still plenty more twists in the road before anyone will start to feel safe about their position at this Dakar.

0 0 0 0 0
Previous : Porsche mourns the death of Dan Gurney
Next : Wrong turns and sun burns dominate stage 10 of the Dakar Rally