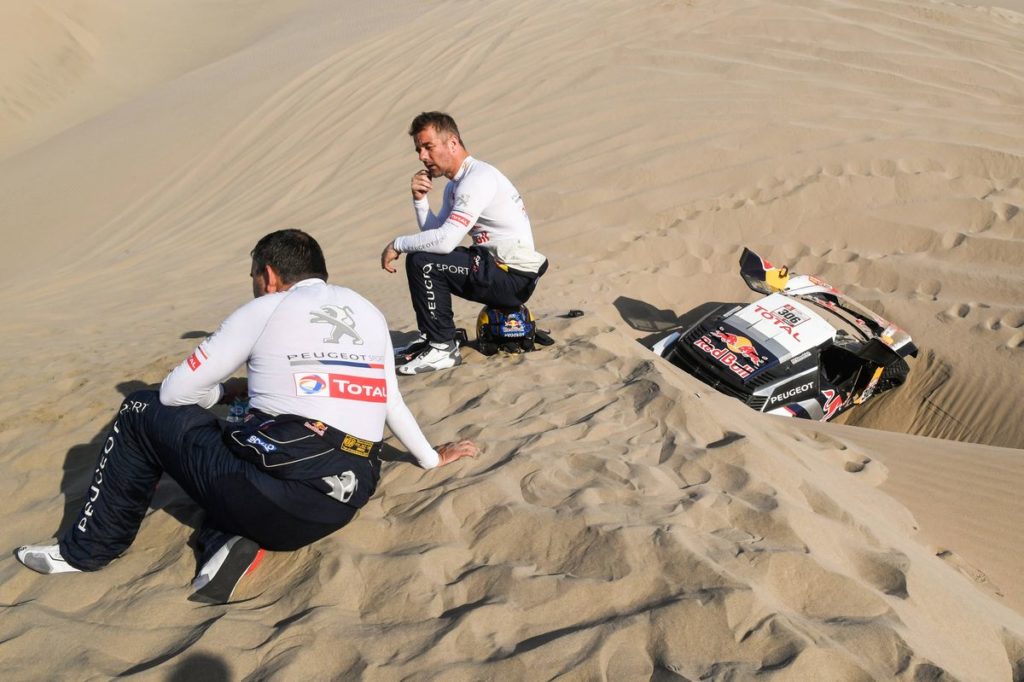 The 2018 Dakar Rally took no mercy on competitors on stage five as it plunged them into the Peruvian desert once again. Paying a heavy price for getting stuck in the dunes were nine-time WRC winners Sébastien Loeb (FRA)/Daniel Elena (MON) who saw their Dakar come to a premature end.

As a result of clocking yesterday’s fastest time Loeb was handed the job of driving the first car onto today’s stage which featured the soft sands of Tanaka. The pitfalls of the desert rendered Loeb’s Peugeot 3008DKR Maxi unmovable and when his co-driver Elena fell ill then the decision was made to call it a day. Loeb’s retirement comes after yesterday’s forced departures of reigning bike race champion Sam Sunderland (GBR) and football manager turned rally racer André Villas-Boas (POR).

“We got to a place where there was another competitor stopped on a crest: in order not to have to stop while we were climbing I went right to avoid him…but there was a hole just over the crest that we hadn’t seen. We hit it hard. There was nothing more we could do but wait for the truck to pull us out. Daniel was in a lot of pain from the impact. We even finished the stage really slowly, in order not to make the pain worse. Given Daniel’s injury, we were left with no option but to retire.” – Sébastien Loeb

Better news for Team Peugeot Total came from multiple winners Stéphane Peterhansel (FRA)/Jean Paul Cottret (FRA) who increased their overall lead in the car category. The French duo used all their experience to come through one of the toughest stages of this year’s Dakar unscathed.

“We didn’t have any problems, but it was extremely tricky. These dunes were the most difficult ones since the start of the rally.” – Stéphane Peterhansel

Other big winners in the car race were Bernhard Ten Brinke (NDL)/Michel Perin (FRA) who bagged the second fastest time on the stage to move into third overall.

The two other Peugeot crews of Carlos Sainz (ESP)/Lucas Cruz (ESP) and Cyril Despres (FRA)/David Castera (FRA) were unable to keep pace with the race leaders but arrived back in the Arequipa bivouac after a solid day of driving. Sainz is second overall, 31m16s behind Peterhansel.

“We’re always very happy to be in the race. This is the most positive thing that’s happened to us in the last two days.” – Cyril Despres

It was another frustrating days for the Toyota Gazoo Racing SA crews of Giniel de Villiers (ZAF)/ Dirk von Zitzewitz (GER) and Nasser Al-Attiyah (QAT)/Mathieu Baumel (FRA). Although these pairs clocked the third and fifth fastest times on the stage they were unable to close the gap between themselves and Peterhansel at the front of the race. Al-Attiyah is fourth overall, 01h23m21s behind Peterhansel while De Villiers is fifth overall and a further 11 minutes back.

On the bikes the fight to get back on top of the general classification is well and truly underway from Joan Barreda (ESP). Barreda won today’s stage in fine style to cut the gap between himself and overall leader Adrien Van Beveren (FRA). Also moving closer to Van Beveren on stage five was Red Bull KTM Factory Team rider Matthias Walkner (AUT) who now holds second overall.

“I don’t have a defined strategy because at the Dakar things can change so quickly. You need to be able to adapt to what’s going on around you at all times.” – Matthias Walkner

Not too far behind Walkner on the stage, as well as in the overall rankings, are his team-mates Antoine Méo (FRA) and Toby Price (AUS). Méo reminded the bivouac with his fourth place on the route to Arequipa that he has the speed to compete at the sharp end of the bike race.

“I’m really satisfied with my day. We just made one small mistake at the end but nothing like what happened yesterday.” – Antoine Méo

There was drama in the truck race when race leader Eduard Nikolaev (RUS) made a mistake on a dune that put his Kamaz truck on its side. The operation to get the big blue beast back on its wheels could have taken hours, but luckily for Nikolaev righting the truck turned out to be a fairly routine operation. So routine in fact that Nikolaev would go on to win the stage and increase his overall lead.

“It was a big relief to be able to quickly find a solution for the problem we had on the stage. Increasing our lead on a difficult stage like we had today is a great result for the team.” – Eduard Nikolaev

Just as things seem to be going the way of Nikolaev in the truck race there’s plenty of encouraging signs for Ignacio Casale (CHI) in the quad race. Another fine ride from Casale saw him pick up the day’s second fastest time in his category. An injury has forced Casale’s closest rival Sergei Karyakin (RUS) to retire meaning that the Chilean quad biker now holds an advantage of over 40 minutes from Alexis Hernandez (PER) who has been promoted to second overall.

Tomorrow brings with it the first border crossing of the Dakar’s 40th anniversary edition as the convoy leaves Peru and enters Bolivia. The altitude of the Bolivian Altiplano replaces the dunes of Peru as the major challenge facing racers alongside growing tiredness.