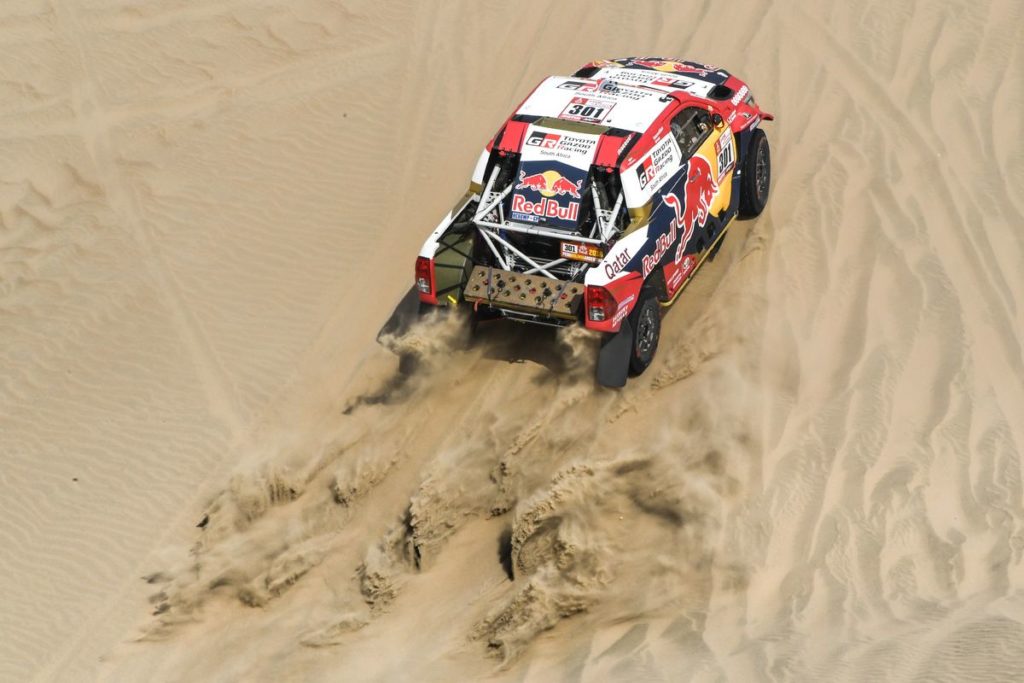 Over 500 brave offroaders were waved off from Lima this morning as they started the 40th anniversary edition of the Dakar Rally. The crowds came out in force as the Dakar returned to Peru’s capital city after an absence of five years. Former champions, local heroes and absolute beginners all embarked on trip from Lima’s city centre streets to the desert dunes of Pisco.

With more than 9,000km in total to travel over a two-week period the Dakar is definitely more of a marathon than a sprint. However, stage one’s timed course of 31km is by far the shortest day of racing at this year’s event.

The fastest car though the sandy stage close to Peru’s Pacific Ocean shoreline belonged to Nasser Al-Attiyah (QAT) and his co-driver Mathieu Baumel (FRA). The duo drilled their Toyota Hilux over the dunes to end the day with an early lead of the overall standings.

“We’re happy with today’s time but tomorrow is another day so we must prepare to do our best again.” – Nasser Al-Attiyah

Al-Attiyah is determined to not only keep pace with the Peugeot team that dominated last year’s Dakar but also to stretch his lead on day two. The Qatari trusts his co-driver Baumel to navigate the dunes tomorrow when the pair’s Toyota Hilux will be the first vehicle on the stage with no tracks in the sand to follow.

“Proportionally, we lost a lot of time to Nasser. Two minutes in 30 kilometres is a lot, but we need to ease into the race, it’ll work out.” – Stéphane Peterhansel

The Peugeot crews of Cyril Despres (FRA)/David Castera (FRA), Carlos Sainz (ESP)/Lucas Cruz (ESP) and Sébastien Loeb (FRA)/Daniel Elena (MON) as well as Peterhansel and Cottret will no doubt bring the fight back to Nasser on tomorrow’s longer stage.

Loeb must recover from the five minutes he lost to Al-Attiyah after the nine-time WRC champ found himself without functional brakes after just three kilometres of racing.

The MINIs of Bryce Menzies (USA)/Pete Mortensen (USA) and Kuba Przygonski (POL)/Tom Colsoul (BEL) showed good speed on the sand. These two crews both did enough to secure a Top 10 finish on the route to Pisco.

“We found a good rhythm and aside from one small navigation mistake we can be pleased with a solid first day.” – Kuba Przygonski

Football coach turned rally racer André Villas-Boas (POR) can be proud of his first Dakar stage with a Top 50 result in the bag.

In the bike race there was some terrific early speed on display and setting the pace was defending champion Sam Sunderland (GBR). The British biker saw off the sandy 31-kilometre track in under 21 minutes to open up a lead of over 30 seconds on his nearest rival.

“I was feeling good, the bike was working great and we got the win.” – Sam Sunderland

“It was not a long stage but it was very demanding. It was difficult to see the terrain ahead so that made things tough.” – Laia Sanz

There were also impressive performances from Daniel Nosiglia (BOL) and CS Santosh (IND) who recorded the 8th and 13th quickest bike times respectively. This pair of riders will be hoping to keep pace with the frontrunners as long as possible as the rally moves through Peru and into Bolivia during the first week.

“This is my first time in Peru and the dunes are way different from anything I’ve raced on before.” – CS Santosh

Race fans who have made the trip to Peru from neighbouring Chile are celebrating an opening day stage win by Ignacio Casale (CHI). The quad biker has got his Dakar off to the perfect start as he looks to secure his second overall title after winning big in 2014.

“It’s a good start, but I’m here to win the overall.” – Ignacio Casale

Things intensify at the Dakar tomorrow with more than 250km to be navigated against the clock. The cars are the first vehicles out on the stage and with 90 percent of the course off-piste it’s going to be a tough challenge for the co-drivers as well as those behind the wheel.

The 40th edition of the Dakar Rally takes place from January 6 until January 20. Watch daily updates of all the action from South America at www.RedBull.com/Dakar.