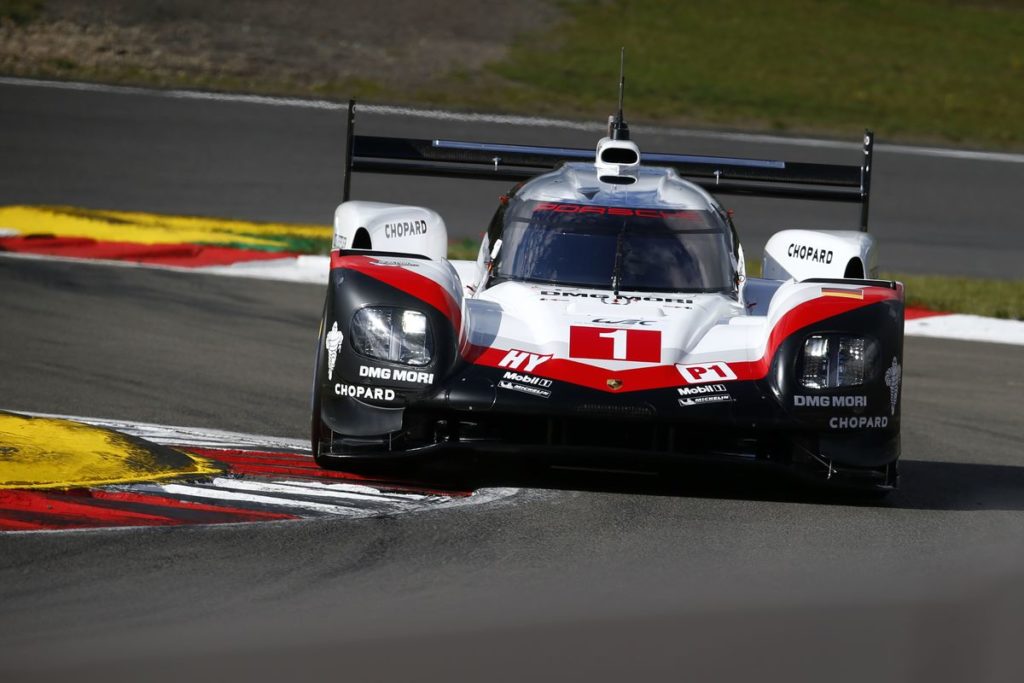 After the summer break the Porsche LMP Team heads to the first 2017 overseas race: The fifth of nine rounds of the FIA World Endurance Championship (WEC) is held on September 3 in Mexico City and the team aims to extend its championship lead. After race wins in Le Mans and at the Nürburgring, Porsche now leads the manufacturers’ standings on 154 points from Toyota (114.5 points). The trio of Earl Bamber (NZ), Timo Bernhard (DE) and Brendon Hartley (NZ) currently tops the drivers’ standings on 108 points, having a 30-point advantage to the best placed Toyota crew. Reigning World Champion Neel Jani (CH) and his partners André Lotterer (DE) and Nick Tandy (GB) with the second Porsche 919 Hybrid currently rank in fourth position (46 points).

Fritz Enzinger, Vice President LMP1, says in the run-up to the six-hour race in Mexico: “We continue to follow the clear target of defending both world championship titles. After winning the Le Mans 24 Hours for the third consecutive time despite difficult circumstances, and more recently claiming a hat-trick of wins at the Nürburgring, we want to conclude the 2017 WEC with the third successive constructors’ and drivers’ titles.” Since Porsche’s return to the top category of Le Mans Prototypes (LMP1) in 2014, the Porsche 919 Hybrid has won 15 races.

Porsche announced its new motorsport strategy last month (July) which confirmed the end of the LMP1 programme at the end of 2017. “The Porsche 919 Hybrid will not only be remembered as one of the companies most successful race cars”, Enzinger points out, “but it is also a role model of Porsche’s philosophy to take technology to its limits and test future relevant innovations in motor sports. With regard to electrification, hybrid and high voltage technology as well as combustion efficiency, the 919 took on a pioneering task that paid off.”

The Porsche 919 Hybrid develops a system power of around 900 HP (662 kW) that comes from a compact two-litre turbo charged V4-cylinder (nearly 500 PS/368 kW) engine and two different energy recovery systems – brake energy from the front axle combined with exhaust energy. The combustion engine drives the rear axle while the electro motor boosts the front axle with an output of more than 400 PS (294 kW). The electrical energy that comes from the front brakes and the exhaust system is temporarily stored in a liquid-cooled lithium ion battery.

Team Principal Andreas Seidl focuses on the coming championship round on the 4.304 kilometre long Grand Prix circuit at the million-resident metropolis of Mexico City: “The most specific feature is the altitude of 2,250 metres above sea level. Thin air with less oxygen makes appropriate cooling of the power train and brakes difficult and also has a huge influence on aerodynamics. Lower drag leads to less downforce and stability in the corners. On the other hand top speeds on the 1.2 kilometre long straight tend to be high. In 2016, the team adapted very well to these special requirements. We certainly would love to repeat last year’s win at the Autódromo Hermanos Rodríguez.”

The circuit is named after the brothers Pedro and Ricardo Rodríguez, who’s successes are fondly remembered at Porsche; especially the feats of Pedro Rodríguez who became sports car world champion with the 917 in 1970. The circuit is narrow and challenging. Its landmark is the right-left-hander in front of the steep grandstands of a former baseball stadium. The race starts at noon on Sunday and will be broadcasted worldwide on the internet and television.

The Porsche LMP drivers before the race in Mexico City
Drivers Porsche 919 Hybrid car number 1:
Neel Jani (33, Switzerland): “This year’s summer break was a little different because I was obviously busy with planning for the future. But I also trained at high altitude to prepare specifically for the race at Mexico City. The overseas races will now become the 919’s farewell tour. I want to give everything to get top results, absorb everything and enjoy every single moment with this great Porsche Team.”

André Lotterer (35, Germany): “I’m very much looking forward to the next race. In 2016, the Mexican fans were very enthusiastic. One could feel that in this country there is a lot of passion for racing, and the circuit has a great history to it. I did a Champ Car race there in 2002 which was a great experience. In the WEC last year I managed the overall fastest qualifying lap, and in the race we had a cool catch up until some brake problems occurred. Somehow I always feel very comfortable in this part of the world. Perhaps this is down to my Peruvian father.”

Nick Tandy (32, Great Britain): “I have never been to Mexico and for me it will be the first time to discover a new race track with the 919 Hybrid. I’m looking forward to the challenge and I’m sure the simulator work will help. I know the team was strong there in 2016 and so I hope we can fight for the victory again. I had quite a busy summer with some events and races with my own team. Now I can just concentrate on enjoying driving the 919 again.”

Drivers Porsche 919 Hybrid car number 2
Earl Bamber (27, New Zealand): “I have been to Mexico City but never raced there. It is always good to experience a new circuit and I’m also happy to get back at the wheel of the 919 Hybrid after the long summer break. I hope our aero package works well in Mexico. Of course we lose downforce because of the high altitude, but that’s the same for everybody. Besides having time off, I was doing some coaching in the Carrera Cup Asia junior programme and I was very pleased to see my 23-year old brother winning another race. I’m very proud of him.”

Timo Bernhard (36, Germany): “The Mexican WEC debut in 2016 was a great event with many excited fans. I enjoyed the scenery and in the end our efforts were rewarded with a race win. The track is not an easy one. It is a mixture with elements of a permanent circuit combined with street circuit elements. Sometimes you get very close to the walls and this is where a precise driving style can make a difference. I could physically feel the thin air which is an additional aspect. Last year the team adapted very quickly. I’m very much looking forward to the race. It’s time that the break comes to an end.”

Brendon Hartley (27, New Zealand): “The Autódromo Hermanos Rodríguez is one of my favourite circuits on the calendar with its street track feel and stadium atmosphere. We won the race last year and return this year with the same goal in mind. Although we had the bad news Porsche will stop its LMP1 programme at the end of this season, every single member of the team will continue giving their very best and fight for the titles.”

TV and live streaming:
– The official WEC App can be downloaded free of charge with an extended (not free of charge) version available which includes full live streaming and full timing. The live stream is voiced by the FIA WEC TV team including live interviews from the pits.
– The WEC races can be followed on various international TV channels in Europe, Asia, Australia and New Zealand, North and South America as well as in the Middle East and Africa.

Facts and figures:
– The WEC efficiency regulations limit the amount of energy that can be used per lap. On the 4.304 kilometres long lap of the Autódromo Hermanos Rodríguez, the Porsche 919 Hybrid can use 3.92 megajoule of electrical power from energy recovery systems and 1.10 kg/1.52 litres of petrol.
– At normal race speed, the Porsche 919 Hybrid is due for refuelling after a maximum of 40 laps.
– Refuelling and changing tyres may only be done sequentially, not at the same time. Only four mechanics may work simultaneously when changing tyres and also may use only one wheel gun at a time. That takes a lot longer than in F1, for example.
– The drivers are normally only changed when new tyres are needed.
– These different types of tyres can be used: three different compounds of slick tyres for dry conditions, a hybrid tyre (no profile either but softer cover) for mixed conditions and wet weather tyres. Four sets of dry weather tyres are available per car for qualifying and the race, this is two sets less than in 2016.
– A lap on the Grand Prix circuit has eleven right handers and six left handers.

Review:
– In the 2016 qualifying, the lap times of the top four LMP1 cars were covered by just three tenths of a second. The two Porsche 919 Hybrids started from grid position two (Romain Dumas/Neel Jani/Marc Lieb) and four (Timo Bernhard/Brendon Hartley/Mark Webber). Pole position went to Audi drivers Lucas Di Grassi/Loic Duval/Oliver Jarvis with an average lap time of 1:25.069 minutes. They had beaten the average time of the second placed Porsche by a mere 0.042 seconds. André Lotterer, back then at the wheel of the sister Audi, managed the overall fastest qualifying lap in 1:24.763 minutes.
– The action packed six-hour race saw frequent changes for the lead, rain at times and Bernhard/Hartley/Webber taking the race win. The sister Porsche was unlucky with the tyre strategy in changing conditions and also had contact with another car. The 2016 world champions finished fourth in Mexico.

0 0 0 0 0
Previous : Kessel Racing gets their first season title in the Blancpain Sprint Cup
Next : Mexican mission for Toyota Gazoo Racing